Sunday found me up and ready to go by 830...despite a running battle with the rabid bacon thieves who were raiding my hotels breakfast bar all morning...ggggrrrr friggin kids!!!

Anyway...I arrived at DropZone shortly after 9am and found things just getting rolling.  About a half a dozen folks were already there...including a much refreshed Blake after a good nights sleep.

After having kind of floated around chatting and what not for day one I was ready to dive right into a game...luckily for me Tom was obliging and we quickly pulled together a moderate sized pick up battle (2k-ish points) that we set up on one end of Rusty's warband table.  Tom brought out his very impressive chaos army and I was finally able to get my dwarfs on table!

So I don't want to spill all the beans on the battle itself as I'm sure there will be future posts in which to tell that story.  Suffice to say that Tom and I had a blast and I was overjoyed to get my lads on the table against such a well painted and led opponent.  There were laughs... there were tears... and the dice gods were fickle at times but ...thats Oldhammer for ya!

I loved every minute of it!

Here are a couple of teaser pics...you'll have to wait for the rest.

Well, its Wednesday night and I finally feel ready to review the weekends events in detail....the drive home sucked and I'm only now feeling human again.

As previously mentioned I arrived in Baltimore around 7:30 ion Friday and met up with Tom (AirborneGrove) and Don (Thefan) at DropZone Games to help set-up.  Soon Rusty and Richard (OrcLord) showed up with the main tables and we had our hands full bringing in the supplies for the RoC Warbands and Siege Games.  But we could only get so far before DropZone closed for the night.

As I understand it the crew staying at the Days Inn (You know who you are!) might have had a bit to drink and stayed up half the night talking.  I on the other hand was back in my hotel room by 10 and finished up a few things on my army then sacked out...the 9 hour drive had caught up to me.

Saturday morning I loaded up and was at DropZone by 9am.  Caught up with the same crew from the previous night and also finally got to meet Blake and Kyle in person as well.  We all got busy setting up tables...Don set up his 3D Space Hulk table...We all Chipped in helping Richard with the enormous mass of troops for his spectacular siege game...and the rest of the terrain was added to the Warbands table.

As the morning wore on more and more folks arrived and soon the place had more than 20 Oldhammerers shooting the shit...trading lead...ogling the siege game and other tables and generally having a good old time. During this time Chris (Darrin Stephens) Showed up and set up his RT Demo game and soon the dice were flying.

Richard, Don, Andy, Gary and anyone who could be persuaded to roll some dice stopped by the Siege game that pitted a truly epic Greenskin horde attempting the clear the heavily defended Empire earthworks in front of the city wall they hopped to take.   The number and quality of miniatures on this table was truly mind blowing.  Lets look at some pictures!

Oldhammer in the NW prep...part 5

Well the big day is finally here, we'll be pushing around little lead man on a table in a few hours!  I got into Baltimore around 730 last night and set up with some of the boys at the drop zone. It was great to finally meet a few of my online chums in person.

When I got back to my hotel room I had a little bit of prep to do myself still ...I managed to complete some movement trays for my army and get the whole thing laid out on the table in the room.

These are iPhone photos so please forgive me for their quality. 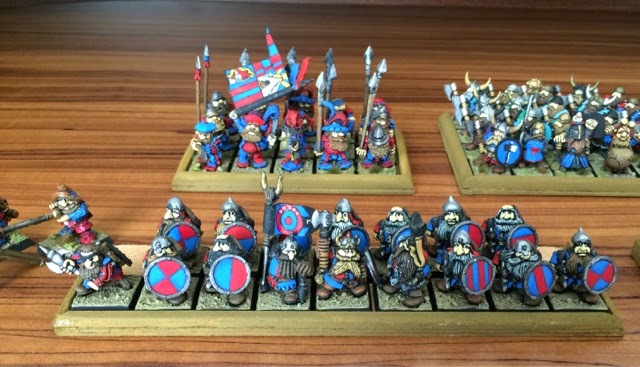 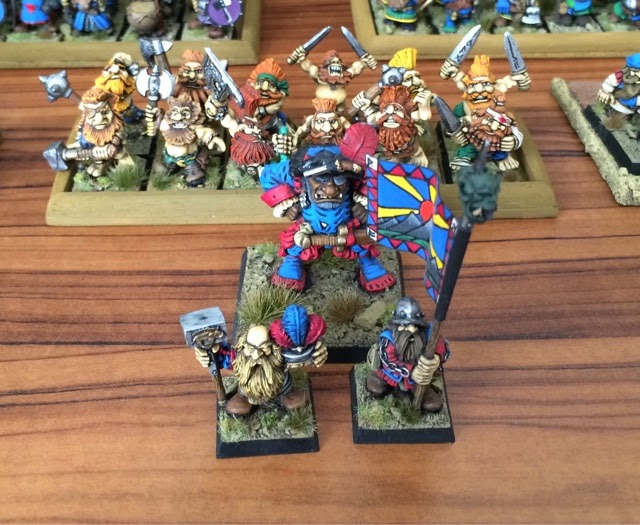 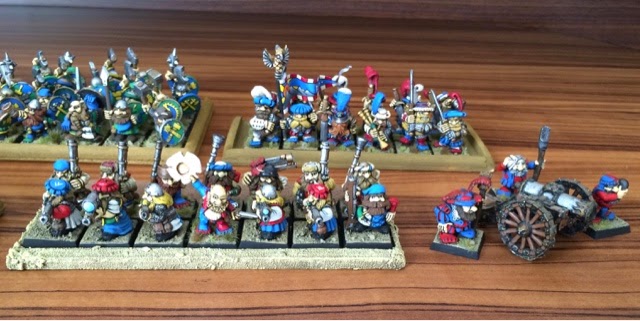 And here are a couple quick shots of the table that Rusty made for the big RoC War bands game. 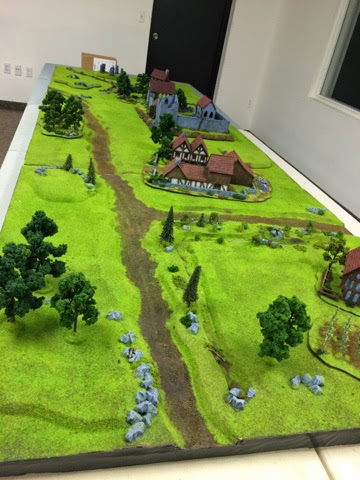 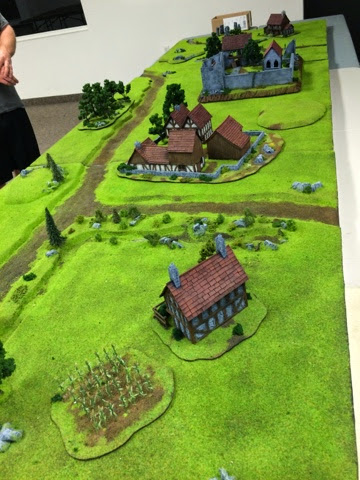 Cheers for now...back with a report on the day's activities later!

Oldhammer in the NW Prep....part 4

Work progresses...basing done for now I'll add static grass if I have time.  Shields for Bugmans also compete and being attached.  I may add the classic Bugman B at a later date. Standards for The Brewers and Pikes have been rehabbed. Next: complete standard bearer for the clansmen! 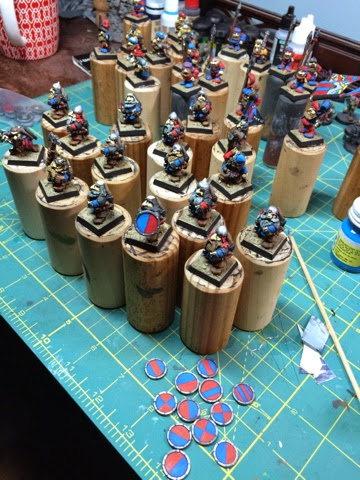 Oldhammer in the NW prep...part 3

Time for another quick update on my preparations for this weekends event in Baltimore. I have completed the basing on the Warhammer regiments dwarves and I'm about halfway done with the remainder of the figures in need.  Here is a picture of them made process. 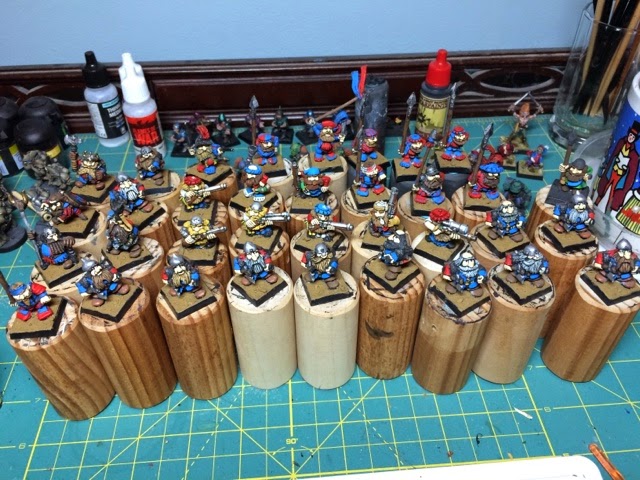 I have also started to get some paint on the bugman's shields, and the clansmen standardbearer is about halfway done as well. 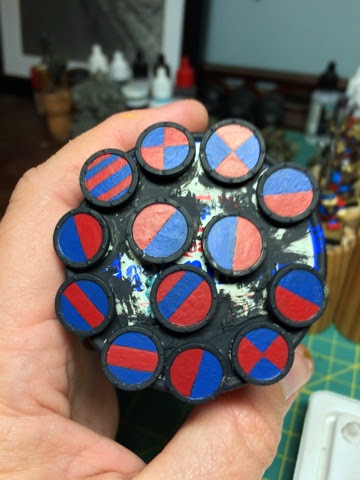 I'm still feeling very stuck for time to get all of these tasks accomplished but as Erny recommended I'll just get as many done as I can and hope for the best.

Oh well better get back to it!

Oldhammer in the NW Prep...Part 2 Progress

Just a quick note to post some progress on my goal of bringing my old units up to snuff for the coming weekend.

I've started with the biggest task which is rebasing about 50 figures.  To that end I replaced all the old green or otherwise painted bases and got busy getting sand glued to each and every one of them.  That happened last night.  Along with the bases I also chose the shields I will use for the Bugman's unit and the few I need for my Warhammer Regiments dwarfs.  These have now been primed...as has the standard bearer for the Clansmen unit.

I have also carefully removed the banners from the Pike Regiment and the Rangers Unit and I will try to do a little clean up and repair on those before reattaching them.

So all in all progress is good...but the bases are still very intimdating to finish in time.  I will put in a couple more long evenings on them tonight and tomorrow...but it wouldn't suprise me if I was still putting static grass on these on Friday night in the hotel room!

Email ThisBlogThis!Share to TwitterShare to FacebookShare to Pinterest
Labels: basing, Dwarfs, Oldhammer in the New World

Ok. It's official...I have a serious problem!

I was cleaning out my hobby closet this afternoon.  When I receive a package of minis I usually take out the goods and throw the box in this closet in case I want to use it to ship somethjng out in the future.  Well.... when the closet got too
full to use for anything else I decided to purge some boxes...this is the pile
Of broken down boxes....holy shit!  I have a serious issue here! :) 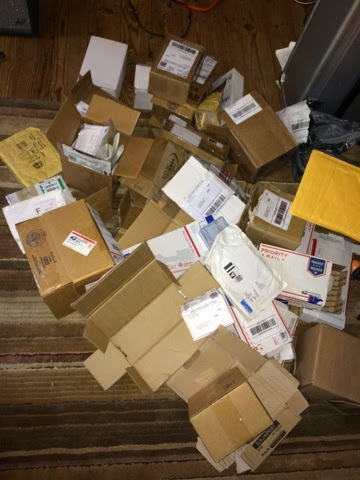 ...and this doesn't include padded envelops!  Or boxes that I did reuse...this is crazy...
"Hello!  My name is Blue and I have a lead addiction"
Cheers,
Blue
Posted by Blue in VT at 5:54 PM 7 comments