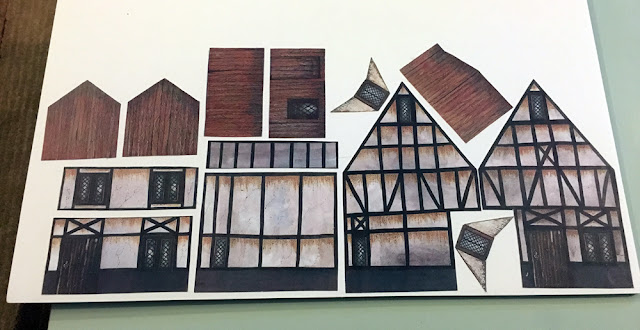 The individual pieces were cut out and and the appropriate edges were rabbeted to maintain proportion. 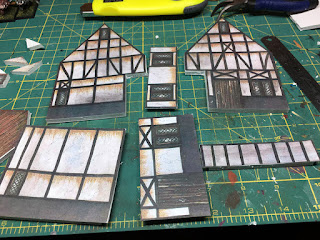 And then the bodies of both buildings were glued together....so far easy peasy... 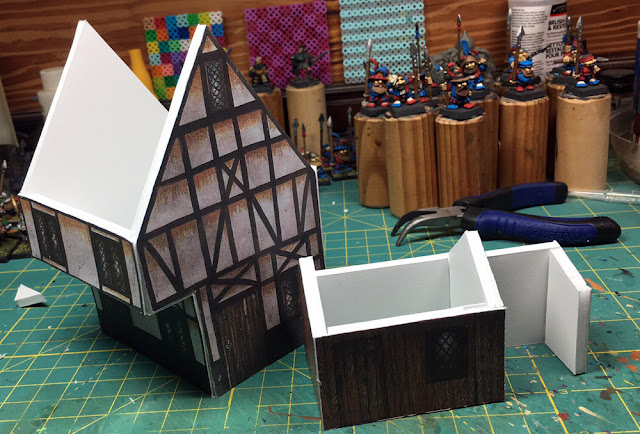 ...And then the timbering began! 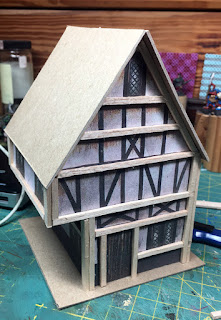 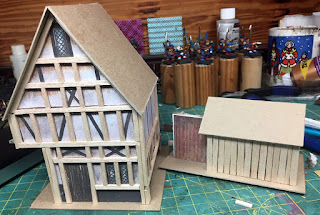 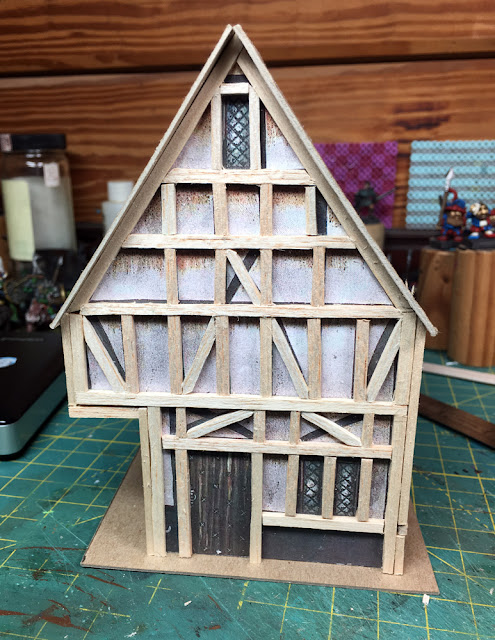 The amount of timbering on the Gabled house was quite daunting and took me several hours to complete...but it does look good when it all comes together.  I also helped pass the time by listening to the Last Kingdom audio book while I built...very motivating listening!

The timbering for the Hovel was also extensive but not as complicated. 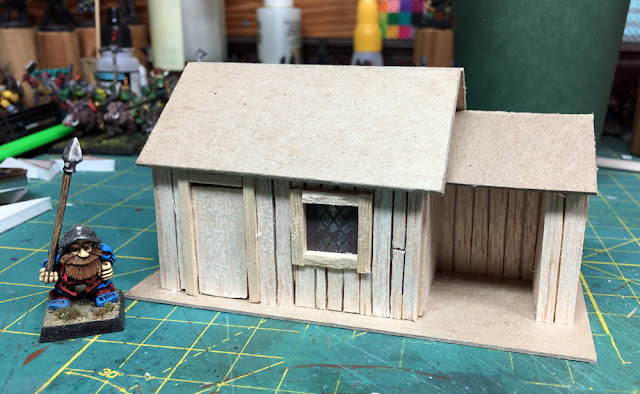 Once the timbering was complete the roof base boards were added and then the shingles... 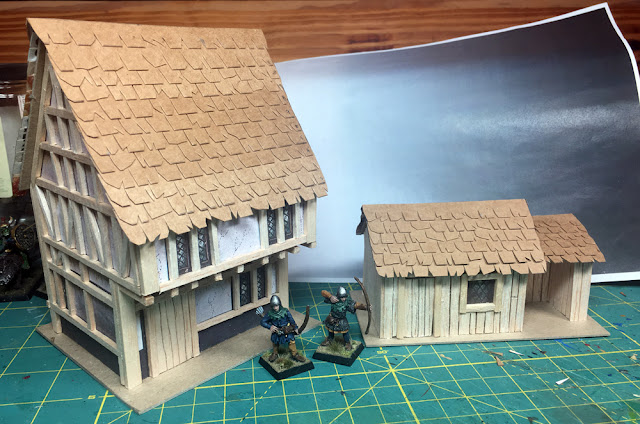 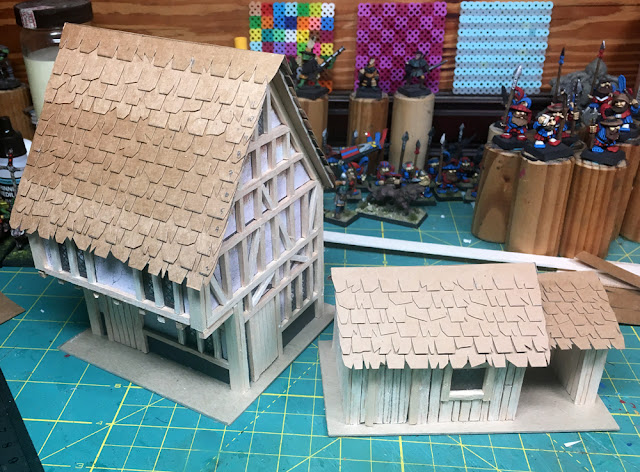 Finally with the timbering complete I moved on to texturing the Gabled house.  For this I employed Stucco Medium on the recommendation of New World Oldhammerer adyer.  (Note this same technique was also used for the Half timber house and Cottage) I applied this with a junky brush...you'll ruin a good one...and then used an exacto to clean any mess off the timbers and set it aside to dry over night. 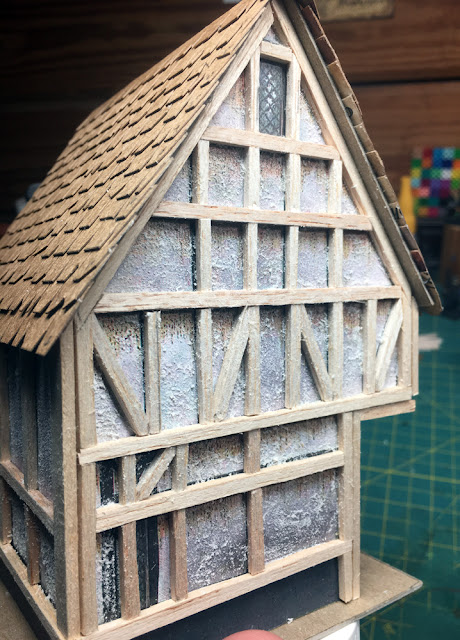 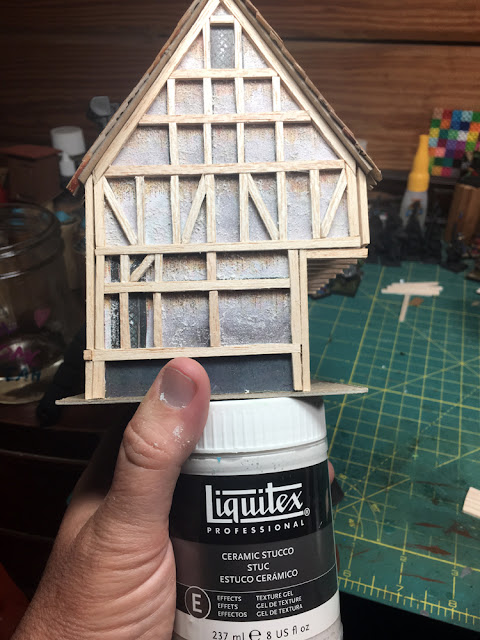 And now for the painting proper!

Since a considerable amount of paint will be used for this operation I relied on the interior latex tester pots I had made for my terrain board....all of which were colors copied from VMC paints that I also use on my figures and bases.

Note: These same techniques were used on the other buildings but not documented as well....the Hovel is basically a small version of the Rough Inn and the Half Timber Cottage and House were painted in a system that mirrors that of the Gabled House presented here.

I started by painting the stucco portions of the Gabled house with my Buff (Vallejo Model Color 976) paint. 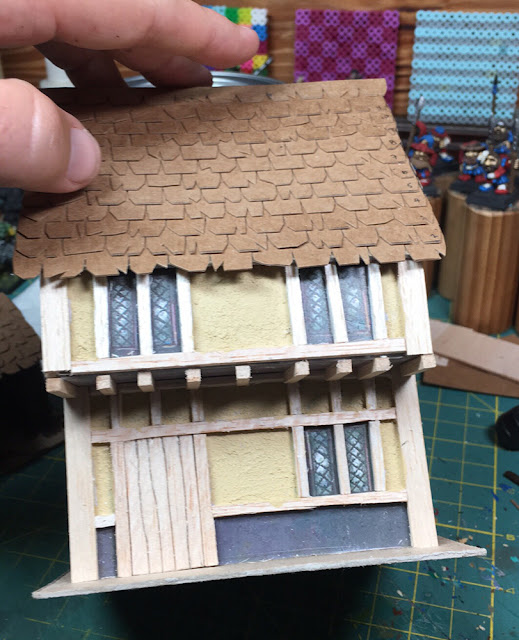 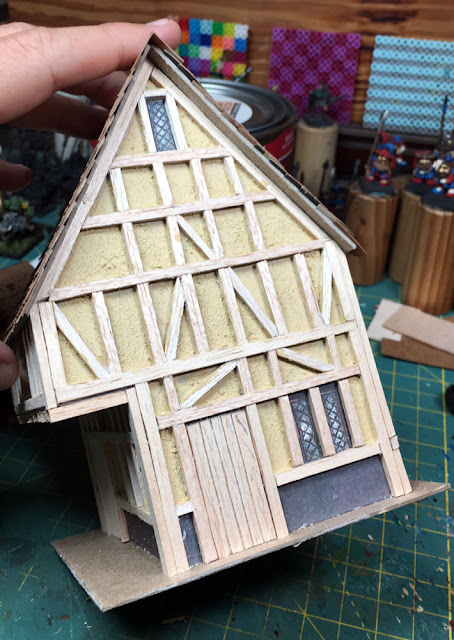 The Hovel and the timbers of the Gabled house got a coat of Chocolate Brown (Vallejo Model Color 872).  Painting all three exposed sides of every timber took FOREVER!  ...in the future I will explore painting the timbers before attachment...it was that painful. 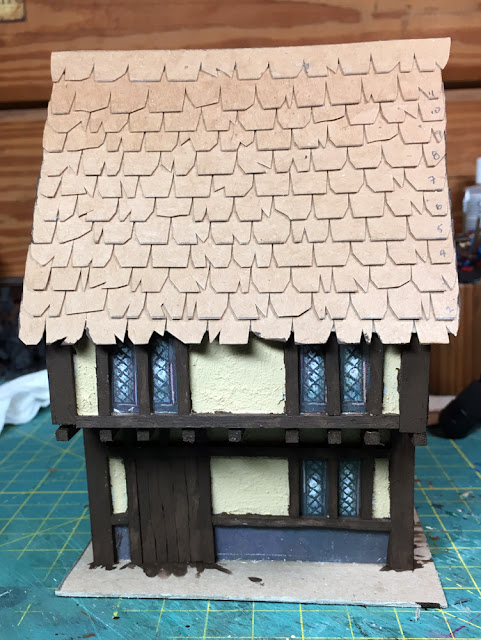 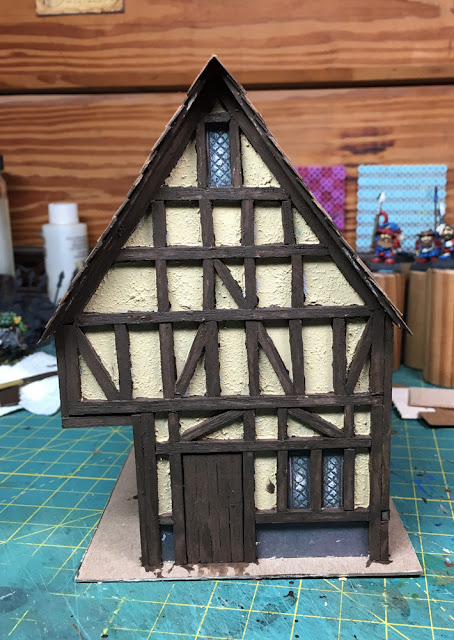 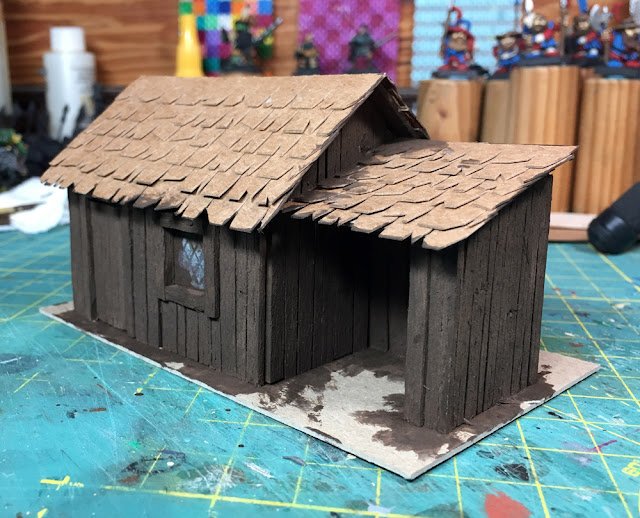 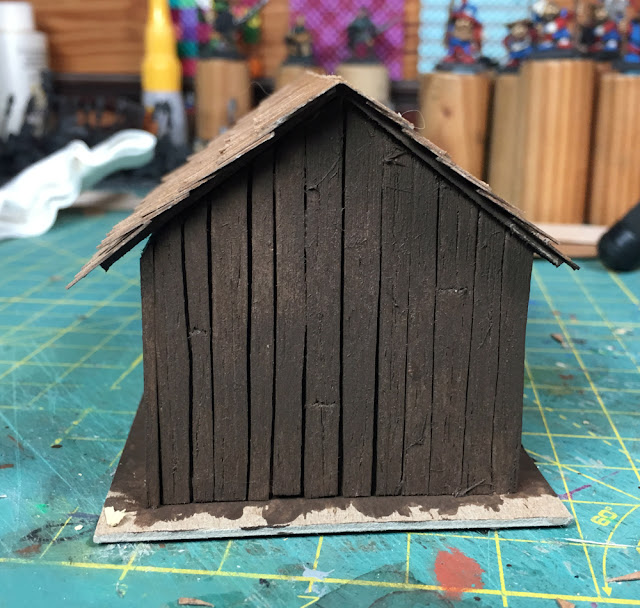 Next the Stucco areas got a dilute wash that is a mix of Black and brown washes... 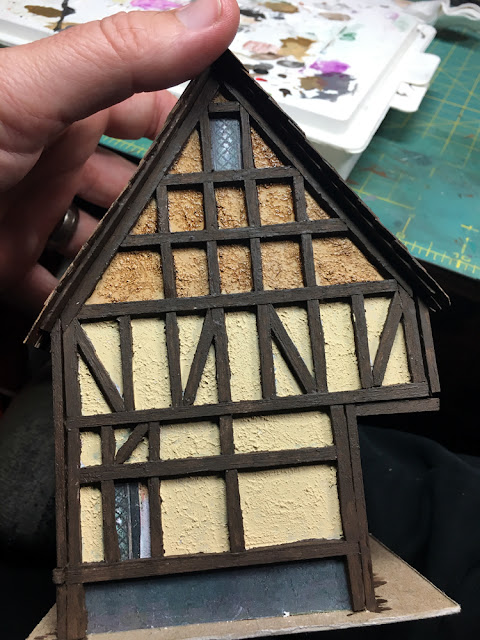 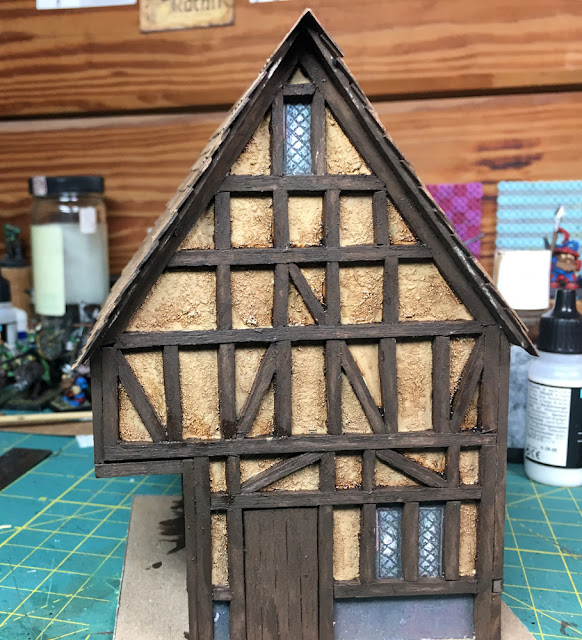 Next the stucco areas were dry brushed with Buff and Buff and White mix....the Stucco Medium gives just the right amount of texture so that dry brushing looks perfect and is quick.  Also, both the brown timbers on the Gabled House and the whole Hovel were then drybrushed with dark, and light gray to weather the timbers...again this is quick and effective. 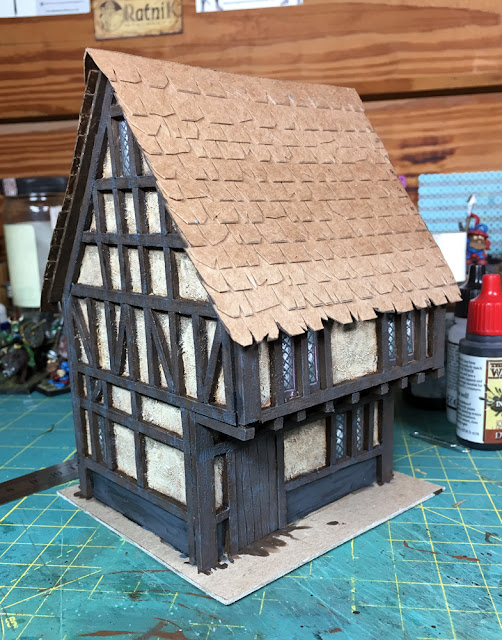 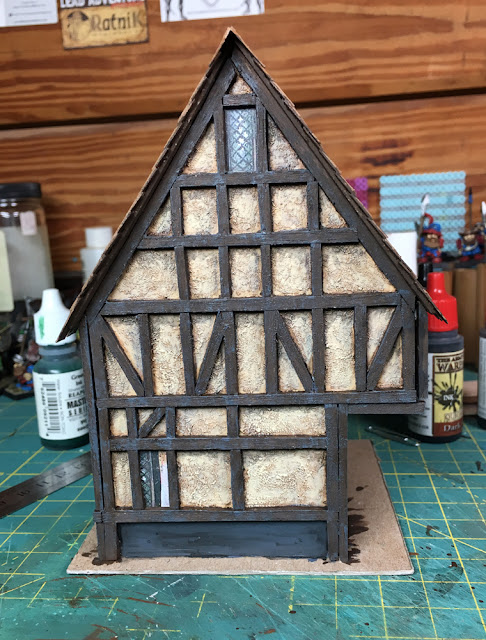 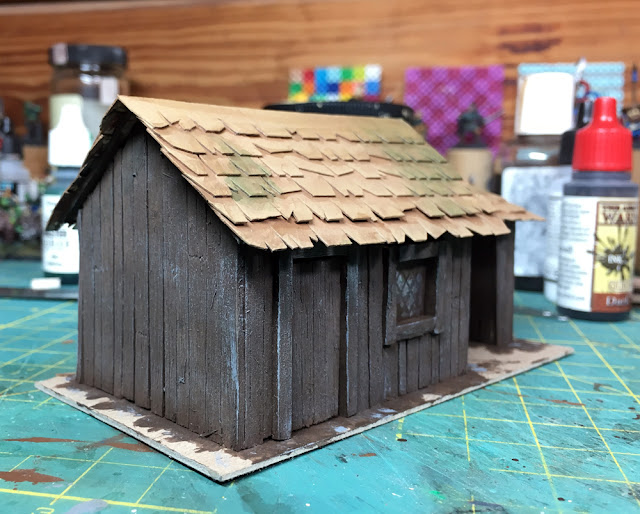 I didn't take step by step photos of the roof painting...but basically for the hovel I started with a dark tan base coat and dry brushed two lighter tans on top and then weathered it a bit with Brown and Green inks and used a little ground green pastel for a mossy effect in places.  The timbers of the walls were weathered in the same fashion.

For the Gabled house I used a Terracota color for the base and highlighted by adding Rust and Light Yellow rust to that base.  Drybrushing with a large brush makes this quick and effective.  I did less weathering on the gabled house as I want it to look a little better cared for than the hovel and most of the other buildings.  I will probably add some minimal staining to the roof in the future when I attach the Chimney...which still hasn't happened.

The narrow bases around the houses were textured and painted in a manner similiar to how I do my figure bases...Sand glued down with PVA and painted...Static grass and some flock added for variation.

So thats about it...Other than the windows and door knobs...These houses are done! Here are a couple of Glamour shots of each of the structures that I've talked about in this series of posts. 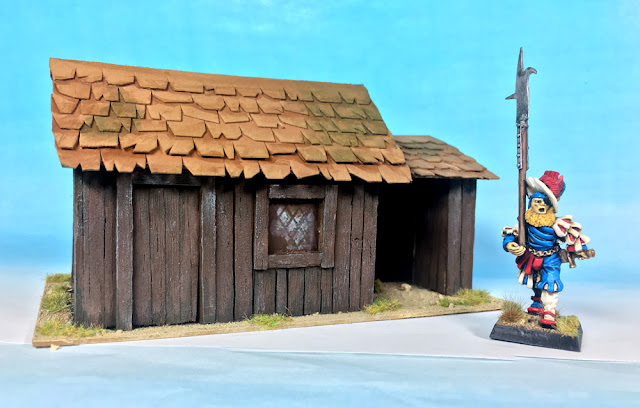 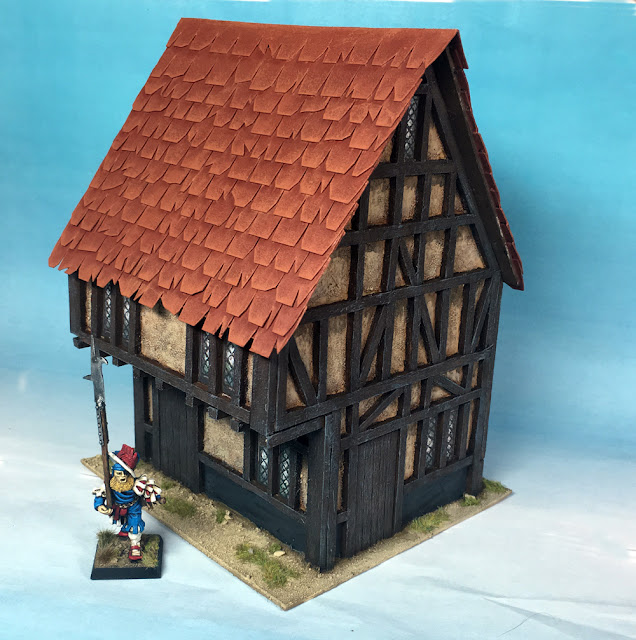 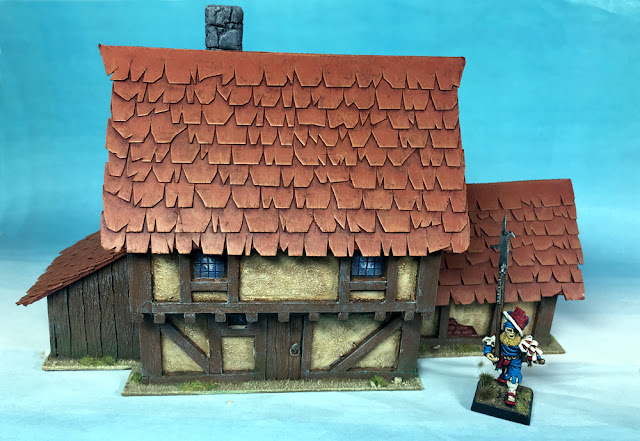 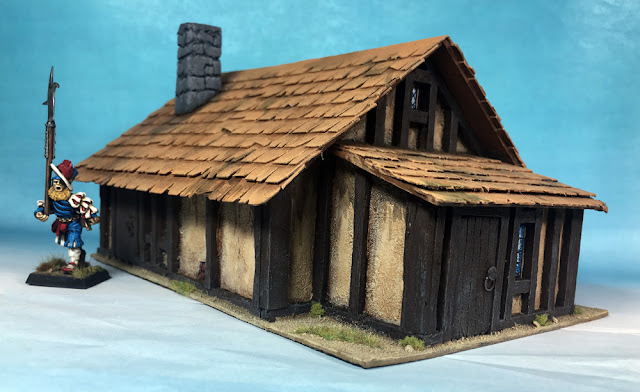 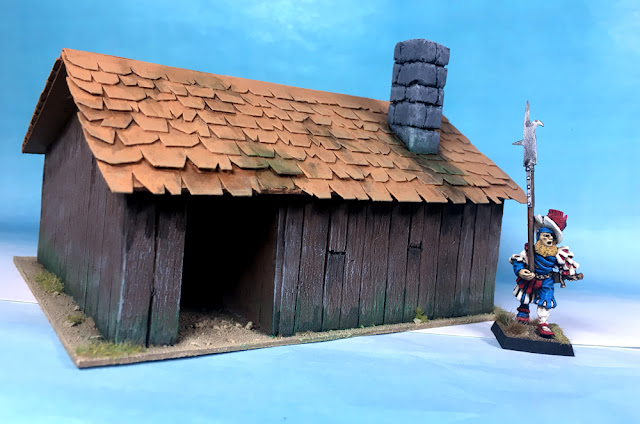 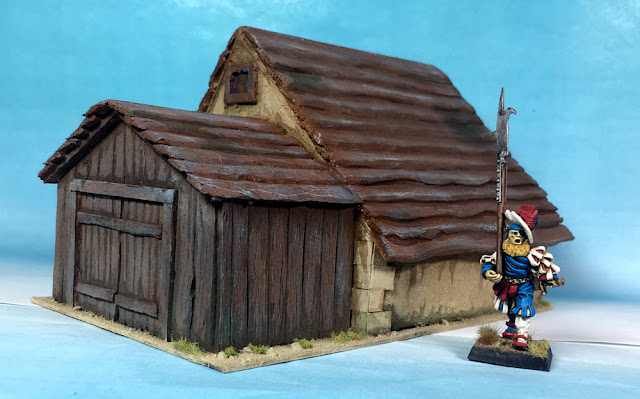 I'd like to close this series by saying how much I have enjoyed the building process and how excited I am to use these houses for games in the future.  If you have ever been hesitant to make your own houses I hope that this shows you it can been done even if starting with NO experience...I had never scratch built a building before...so dive in and have fun with it....the end result will be more immersive and appealing games for the future.