***Editorial Note*** this narrative story was originally posted in sections along with a detailed battle report.  As the length of those reports got to be a bit excessive I opted to remove the narrative bitz and lump them into a separate post here along with some of the images.
The battle report sections can be found here:  Part I Part II Part III
Louis' Tale
The dust caked Louis' throat as the marched.  The feet of the men and horses in front of him stirred the dry dust from the road surface, and the rest of the column quickly became coated with the fine powder.
...And still they marched.
The Marquis had gotten himself, and the Grand Armee, into a spot of trouble, somewhere off to the east.  And now Louis and his comrades were tasked with bailing him out of his mess.
Rumors had trickled back through the villages about the viciousness of the fighting, along with a trickle of wounded and broken men. Occasionally a dispatch rider returned to the garrison with official news and orders from the Marquis himself...
It was just such a rider that brought the order that had set Louis' unit in motion along with the other companies of men from the Garrison of Rhenes.  He and the other tired, dusty, men had been in motion, seemingly non-stop, for the past three days.  They marched from sun up till nearly dark passing through tiny villages, rich pasture land and rolling hills.  Their halberds and shields growing heavier with every step.  Ahead, to the east, there was war, but here the late autumn sun shown on fields ripe for harvest.
As it grew dark each day le Sergent had found them a field or copse to collapse in.  No fires were lit.  Hard bread and a hunk of cheese were the only sustenance they had, though Louis had managed to procure a mug full of the fortified wine that one of Toby's boys carried in barrel on his back.  Both food and beverage were wolfed down quickly before Louis fell into exhausted sleep, the aching of his blistered feet temporarily eased by the potent wine.
The next morning found them on the road again.  They were approaching yet another small village, really just a cluster of a few buildings and their associated fields.  Louis and his fellow halberdmen were in the middle of the column with a small cavalry unit and a unit of archers with their deadly bows to their front.  Behind were the unit of spearmen, the Rouge Cerf (Red Deer or Bleeding Harts) and finally Toby's lads with their hunting bows and potent wine. 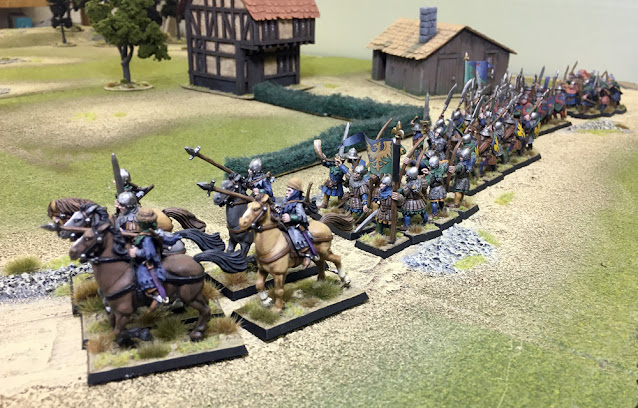 Oathmark: Battles of the Lost Age ...Part III: Game over!

**Editorial Note** Since its initial posting, I have modified a few things and added some details to this post. I also moved the Narrative section to a separate post all together, combining it with the other narrative section from the preliminary post.  The new Narrative section can be found HERE
Hi all,
I'm back with the third and final part of my Battle Report covering my first game of, and initial thoughts on, Oathmark: Battles of the Lost Age.  While I've yet to finish my story and the report...I think that the very fact that this single game has inspired me to write such a lengthy and detailed battle report...as well as an associated Narrative...should give you some idea of what of how much I like this new rules system.
Anyway, more on that later.  Lets catch up the story with our battle report.
The first and second installments of this report can be found here: Oathmark Post I and Oathmark Post II.
Read more »
Posted by Blue in VT at 12:03 AM 7 comments

Oathmark: Battles of the Lost Age ...Part II: Game on! 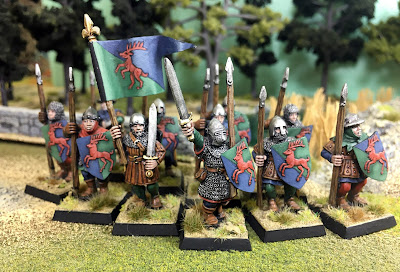 ***Associated Narrative Post HERE ***
Hi all!
After the big build up of the last post lets jump right into the game and see how it plays out.  Just a reminder that this is a follow on to the previous post which laid out the background and army selection for this game.  In these posts I am presenting my initial experience and thoughts about Oathmark: Battles of the Lost Age.  The intro post can be found HERE.
Turn One
Right away I knew it was going to be and interesting night when I rolled for the very first initiative roll and wound up with this insane tie.... 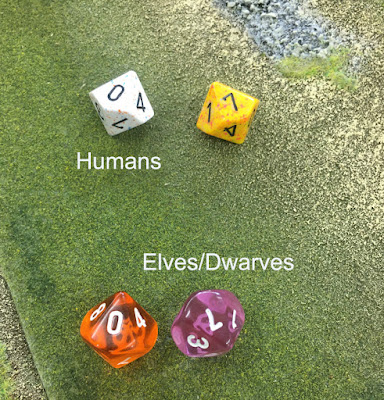 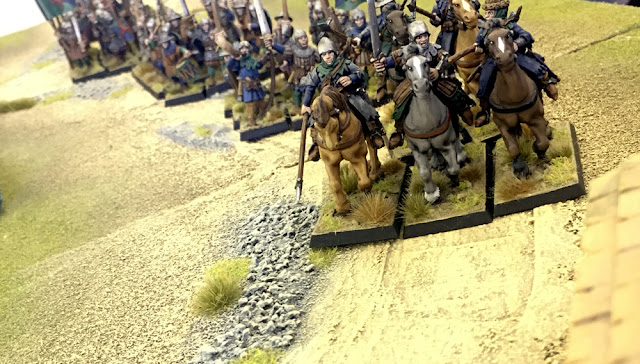 **Editorial Note** Since its initial posting, I have modified a few things and added some scenario details to this post. I also moved the Narrative section to a separate post all together, combining it with the other narrative sections.  That can be found HERE
Preamble
I've got a little something different for you all today...rather than the latest figures I've painted I'm going to share with you my recent exploration of the new set of a Fantasy Mass Combat rules, Oathmark: Battles of the Lost Age.

This new set of rules is put out by Osprey Games and written by Joseph McCullough (creator of Frostgrave).  While I am a die hard WFB 3rd edition fan, I do have interest in a set of mass combat rules that are more simplified and fast moving.  I've dabbled with Dragon Rampant, and Donnybrook but was not over joyed with either and they both had more the feel of a large skirmish game rather than a small unit battle.  Oathmark is the first new set of rules that I've tried that I think will "feel" more like what I'm looking for.
Read more »
Posted by Blue in VT at 10:36 PM 6 comments

Alrighty then...
Here we are again with another WIP post on the Citadel Wolf rider horde that I'm currently laboring away on.  Over the weekend I was able to get the last couple of highlights done on the Goblin Flesh portions of this group...
...and as some have expressed an appreciation of seeing WiP shots (and the fact that I find it motivating to post more often) here are a couple of pictures the horde broken down into unit types.
Here are the Melee Boyz...

Hi all,
Stopping by with a quick post to update you on the progress of the next large batch of wolf riders I've been working on.
I've made progress, but working on a grouping this large means that the pace is glacial.  I often only work on one highlight color a day...when you are applying it to 29 models it takes awhile! 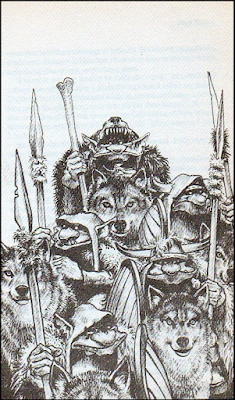 After finishing the Marauder Wolf Riders I shared last time I have decided to move onto the classic Kev Adams sculpted versions as my next major group of figures to tackle.

I'm really enjoying painting the goblins at the moment and I intend to just push on with riders for the moment and then have a massive wolf painting extravaganza later in the spring or early summer.

I have a goodly selection of classic Citadel Goblins...enough to make two units of fourteen figures...one a melee combat unit and one a mounted archer unit.    These units are made from a mix of the original wolf rider sculpts with the addition of some infantry archers and command figures that have been "converted" to be wolf riders.

All of these figures have been picked up on the secondary market over the last couple of years and most have been stripped of old paint jobs.

Here is the whole group after being cleaned of (most) mold lines and flash...and then drilled and pinned for eventual attachment to their mounts.