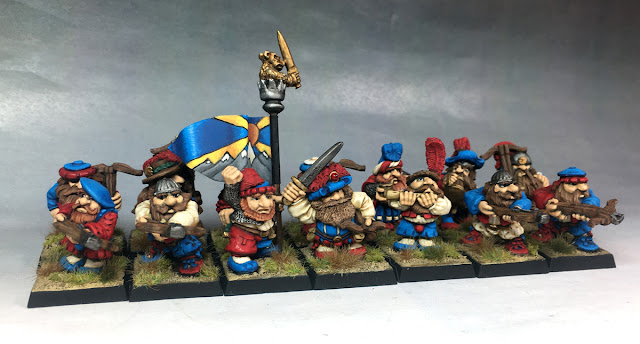 Well...I had fully intended to start bombarding you with posts about the puff and slash dwarfs...but I've gotten sidetracked again.  After completing the last two Renegades...and receiving a couple of new paints in the mail...I decided to crank out one more...just one more! :)

I recently chatted with one of my painting heroes, Stone Cold Lead, when he mentioned the purple recipe he recently used for the Ion Age Retained Knights...and I immediately ordered the paints he recommended and I decided to give it a try.  Purple has been one of my long term problem colors...and I hoped this was the info I needed to get over that hurdle.

For my first attempt with this new color I chose one of the classic Renegade sculpts, Three Eyes! 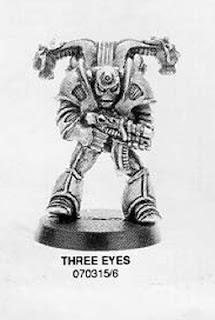 After a marathon of Puff and Slash dwarf painting (much more about this to come) I decided to take a brief break from that and finished up two additional Renegade Marines for the 3rd squad.

The first of these is one of those crazy bright paint jobs that I love to explore with the Renegade models....the second is much more subdued.

This one is one of the Heavy Weapons marines that is rocking a wicked cool visor...which became a bit of a hang up for me in the painting process.  I had had the majority of this figure painted for several months...just the visor was holding me up.  But after chatting with some talented folks I'm lucky enough to know, I developed a plan for conquering the visor and I dove in!  In the end it was fairly straight forward and not as complicated as I had feared.

So here he is...Heavy weapon number two for this squad and trooper number 6.