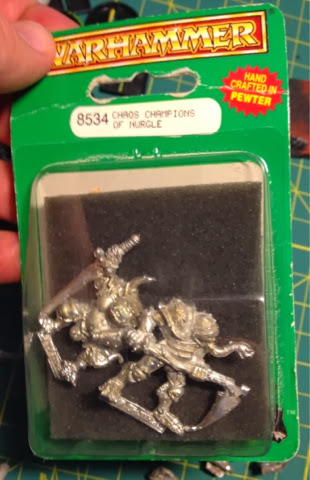 So...what did I buy? Dreadnought confusion...

So...earlier this week I picked up a couple of 40k pieces from eBay at a great price....namely two dreadnoughts.  I was only really interested in one of them but now I'm intrigued by the other.  Here they both are... 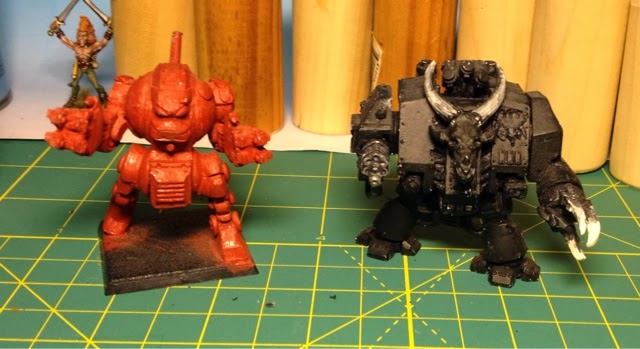 Quite a difference in style!
The rogue trader one on the left is the one I was really after.  I just really dig this guy and have for many a year...every time I look at this guy... 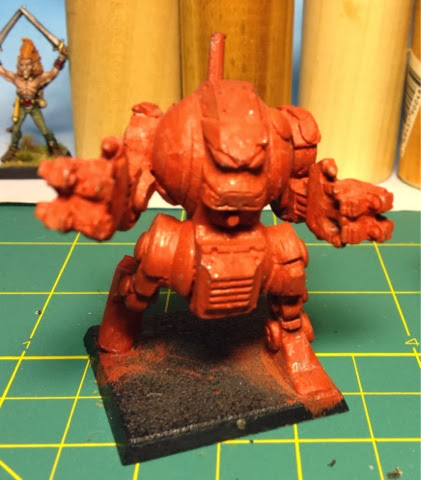 ...I think of this wonderful diorama from back in the day (the dread's down at the bottom). 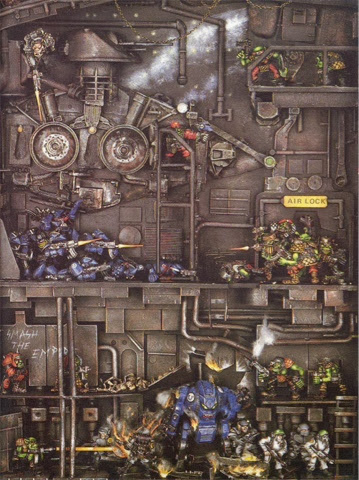 The other dreadnought is obviously of a much newer vintage...but my knowledge of such things is quite limited... 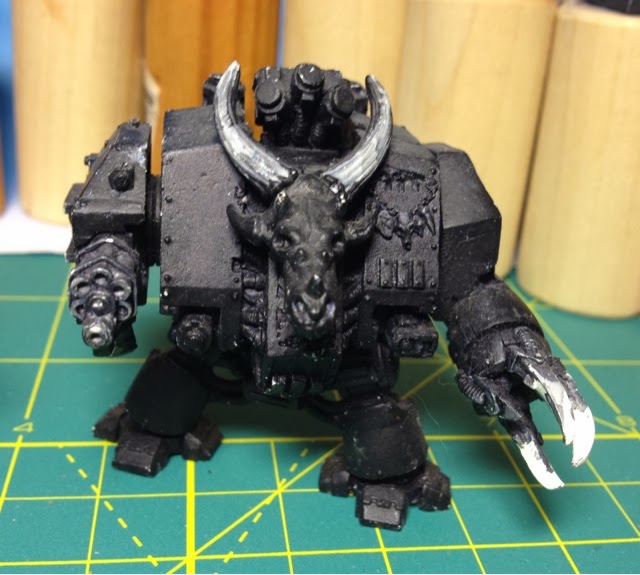 ...so what is this "goat skull" headed, Edward scissor hand having, walking shoebox of a dreadnought??  When was it produced?   It is quite a chunk of metal that's for sure!  I imagine I'll be passing him along...so is he worth much?
Any assistance is greatly appreciated...
Cheers!
Blue
**UPDATE!**
After reading the first comment I took a closer look at this dreads left arm and it has clearly been reshaped and filed down... Thanks for the tip Liam! 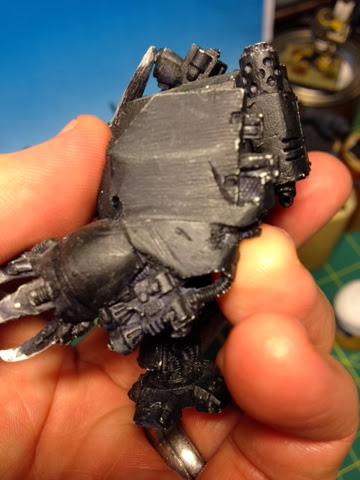 While I have tremendous respect and admiration of many of the sculpts from the classic period of WFB I've have never been a fan of the plastic crossbows that some of them were armed with.  These plastic pieces were used by troops of many different armies including dwarfs, empire, orcs, bretonnian, and chaos dwarfs....and they looked terrible in all their hands...

Time for a proper painting thread....it sure has been awhile!

As we are all now aware, the end of August saw the first of what I hope is many Oldhammer events...though this one will be hard to beat.  The Bring Out Your Lead event was held at the Foundry facility in Nottingham England...it featured all manner of Old School goodness....great games...displays of many epic figures and armies....discussions with some of the artists and games designers that made the games we all love so much unique... in short it sounded like a fabulous time.

So in a desperate effort to participate on some level I painted up a figure and shipped it off to jolly old England so that it could compete in the Golden Gobo contest at the event in my stead.  Thankfully Thantsants was kind enough to act as caretaker and transporter of my figure to and from the event.  I received the figure back from his trip to the olde world a couple of weeks ago but have only now had the time to take quality pictures.

I chose to paint the, to my mind, iconic wood elf wardancer Glam who was sold as the Champion to the ubiquitous Skarloc's Wood Elf Archers RoR.  As you know my heart lies with the dwarfy species of the Warhammer world...both Chaos and otherwise.  So the choice of a Wood Elf for this contest was a bit of a stretch for me...in fact I don't know that I had EVER painted an elf before this one...but I have to say that I thoroughly enjoyed painting this figure and can't wait for the excuse to paint a few more like him.  Jess Goodwin's talents as a sculptor are very well represented in this figure and have really captured my imagination.

...anyway...here is the final product.  Below you will find a discussion of how he got to this point. 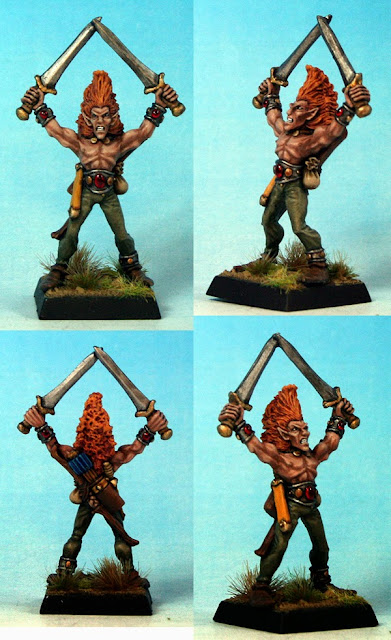 Alright...lets step back to the beginning.  Here we have Glam in nothing more than his Dark Gray primer and with a base color of VMC Chocolate Brown (872) applied to areas that would end up being gold, wood or leather. 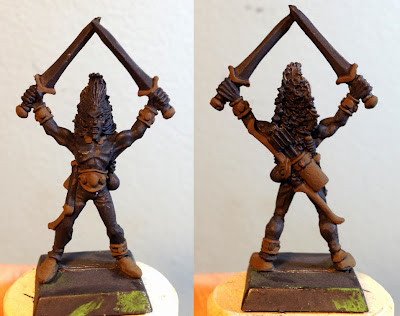 Here he is with most of the base colors in place.  For the skin I base coated with the old GW Foundation Paint Tallarn Flesh with a bit of brown mixed in.  The hair is Vallejo Panzer Aces Light Rust (301). Glam's Pants are another military color...VMC German Fieldgrey (830). 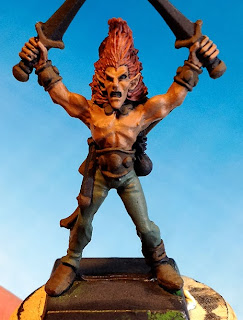 I highlighted the pants by adding Citadel Foundation Dheneb Stone to the Fieldgrey...I highlighted it up pretty far......too far in fact...

Glam was wearing a pair of faded out Dockers...sigh...(luckily I didn't take a picture of this travesty) So... in a bid to save this situation I quickly gave the pants a coat of heavily watered down Reaper Green Ink mixed with Delvan Mud.  This seemed to even the pants out a little and brought some green back into the cloth.  Crisis averted!

I find that the Reaper inks are quite glossy as you can see in places where it pooled like at his ankle cuff.  While this annoys me, and looks weird, I try to remember that the matte varnish at the end will even all that out. 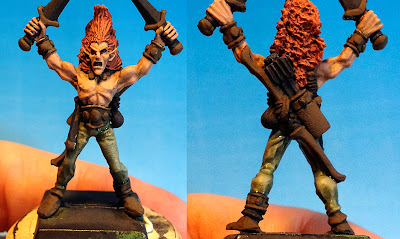 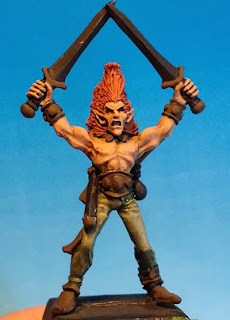 And more Deneb Stone is added to the flesh.  The hair was highlighted by adding a rich yellow to the Light Rust base color...I would tell you what that yellow was called...but it was months ago and I don't remember...:) 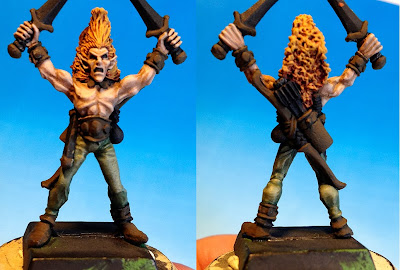 Next I got some base colors on the metal portions (Bolt Gun Metal, ancient Armory Gold Paint) and finally added some off white to his teeth and eye balls... that helped him seem a bit more life like. I also started to pick out some of the finer detail like the fletchings on the arrows and the scabbard for his dagger.

Note here that I painted the Oval decorations on his "belt" and wrist guards black.  I had originally thought to paint them metal but at this point I decided that they should look like gems...so I went with the black base color. 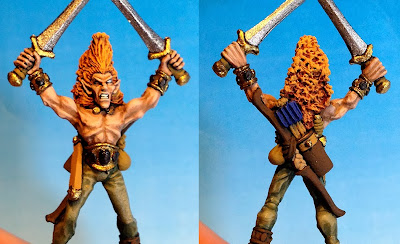 From that black base coat I highlighted the gems up through grey colors to bright white...remembering that that the shading of a gem is backwards from normal shading....the light actually collects at the bottom of gems instead of on the the top. 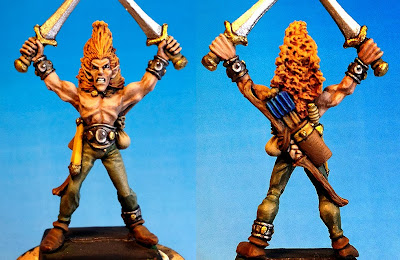 (In hindsight I probably should have gone a little heavier with this highlighting to make the gems a bit brighter but I'm still happy with the result.)

....this is where the Tamiya Clear Red (X-27) comes in....this is a neat product that is available in a  number of different colors and is great for getting realistic and quick gem effects with little effort. 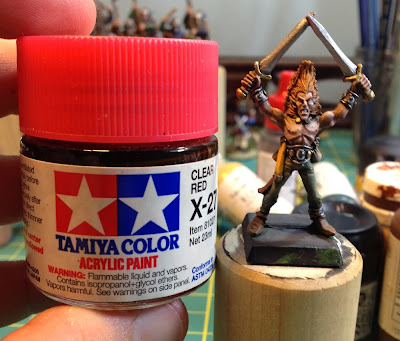 A fairly heavy "drop" of this was applied to each of the "gems" making sure to cover the entire surface  Since this paint is clear, the greyscale shading shows through the glossy red coating and and provides for realistic gems with minimal hassle.

Please keep in mind that this is a solvent based paint...this is not your friendly acrylic paint.  Use a throw away brush (I know you have some kicking around too...from the looks of my painting desk I think I have every brush I've ever owned since I starting painting in the 80's!)  Also...Don't try to clean your brush in your regular water mug....you'll just get your mug all gummy.  And for God's sake keep that paint brush out of your mouth! :) 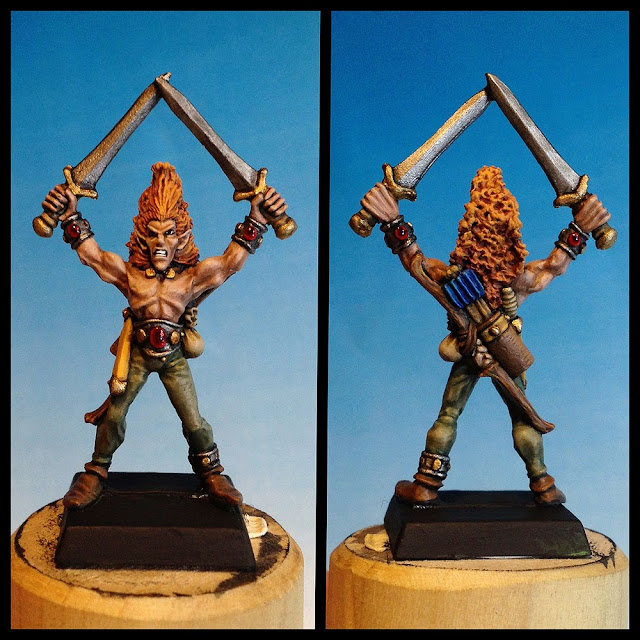 After the gems all I did was add the pupils to his eyes...highlight and wash the Gold and Silver portions.... matte varnish everything (except the gems!) and then applied my normal basing technique.

There is one part of this model that seems "not finished" ...and I would like to have your thoughts on ...I need ideas on some sort of decoration for the scabbard of his dagger...right now its just yellow...and flat....and begging for some sort of freehand...

I suck at freehand...particularly on something this small!

...I tried a few things and they just came out looking sloppy... but I'm willing to try again!

If anyone can suggest some examples of simple, elfish, looking designs (line art?) that might be appropriate here I would love to hear about them.

All in all its was great fun to paint this guy up and to have him represent me at the Oldhammer Day...I certainly look forward to painting up some more Goodwin Elves in the future...(those Mounted Personality figures are high on the list!)

My Brushes...a changing of the guard part II

Howdy all!
As stated in an earlier blog post from more than a year ago I've been using a batch of Rosemary and Co. Sable/synthetic blend brushes for the bulk of my painting.  To my mind these brushes offer a lot and ask a little.  They hold their point fairly well and have decent longevity....longer than my Windson and Newton series 7 pure K. Sable ones ever had....and best of all the price is crazy low...particularly if you live in the UK where shipping is quite cheap.  When I ordered my first batch of brushes from R&Co I ended up paying as much for shipping to the US as I did for the brushes...and still felt it was a good deal...but this time I wanted to avoid that.
So...as many of you know I sent a figure over to the Bring Out Your Lead Oldhammer event in Nottingham  at the end if August... that scholar and gentleman Thantsants agreed to receive and guide my figure to and from the event...as I knew he would be sending my figure back I thought I would take advantage of his kindness and also ask him to send along a new order of brushes for me as well...thereby saving the rather stiff shipping fees.
....With the reduced costs of shipping I might have gone a little nutty...but rationalized that this way I wouldn't have to place another brush order for a couple of years.  I purchased no less than 13 brushes.... 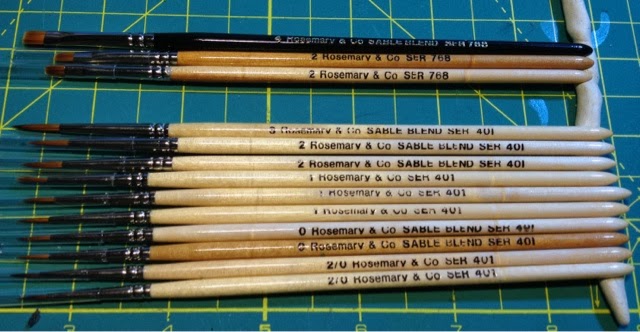 As you can see I got a range of sizes from 3 to 2/0...and then I got three flat brushes of two sizes as well.  I rarely need a brush smaller than 2/0...and if I do I still have a perfectly serviceable W&N 3/0 for that.  Of these the size 1 will probably get the most use (which is why I bought 3 of them!) with the size 2 and 3 being used for fast base coating and use on larger models and horses.  The flats are great for drybrushing...particularly on large areas of fur...I haven't tried these ones yet but as soon as I get around to working on some wolf and/or boar riders they will get a workout.
This whole batch of brushes cost me £20!  Not bad at all....you couldn't get 3 W&N Series 7 brushes for that much.
...now I just need to find the time to use them!
Cheers,
Blue
Posted by Blue in VT at 12:24 AM 4 comments

Email ThisBlogThis!Share to TwitterShare to FacebookShare to Pinterest
Labels: brushes, Rosemary and Co

Something Special up for Trade MM66 Reiksguard Knight

All right....it's time to get serious about moving one of my precious MM66 knights along.....these guys are very rare and fairly valuable particularly since it comes with a horse as well....it has taken me several years to collect 3 of the 5 sculpts but now it's time to focus on closing out some of my other needs..... so I'm looking for trade offers for this guy 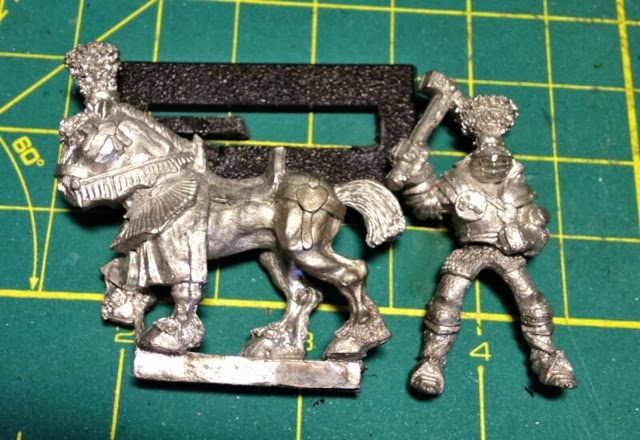 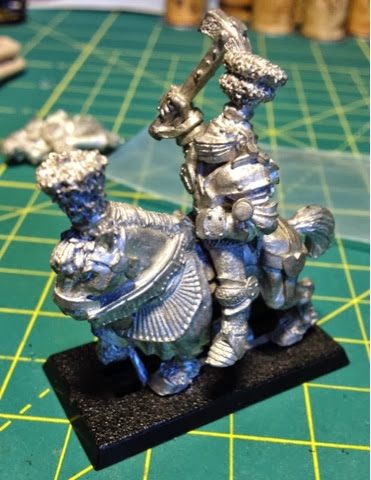 Here is a link to my wants album...anyone want to make a deal?
http://photobucket.com/albums/k285/csabick/Miniatures Wants List
Cheers,
Blue
Posted by Blue in VT at 9:42 PM 6 comments