I put the final touches on those three Chaos Warriors for HlH.  I'm quite pleased with how they came out.  It was a totally different experience to painting the colored metallics...and an experience I'm more comfortable with..;)

First up is this pair with the Mace...This MM90 model is a special one to me...as many of you know...my own version of this figure is the one I use as my avatar on many forums.  The color Blue on this one was a bit of a challenge to match just because its different than my usual blue. 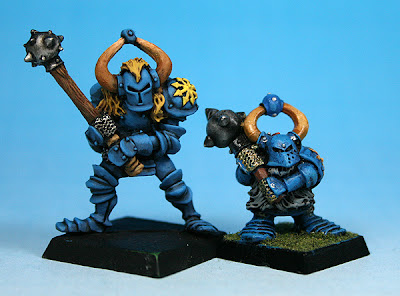 But I found a Vallejo paint that was very similar and went to town.  I think I got pretty close with the blue and really like the way it highlighted up.

Here he is Solo 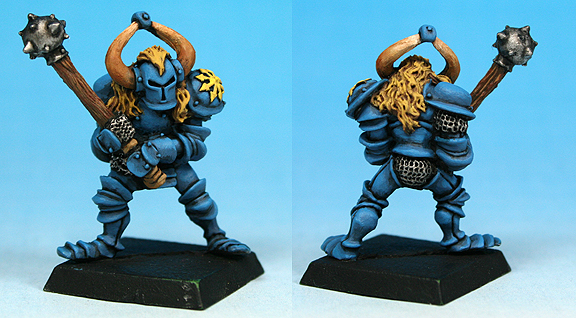 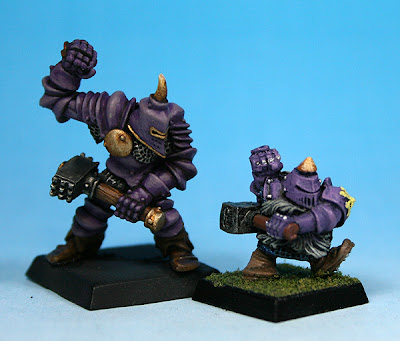 I like the way the Gold accents contrast the purple on this figure. 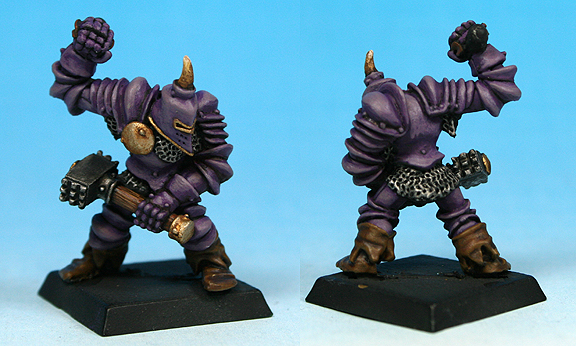 With the last Chaos warrior I drifted a bit from the MM90 I was working from.  The Rust color I achieved is a little less red but I really like the way it turned out...and I will also be using this color on some future chaso figures. 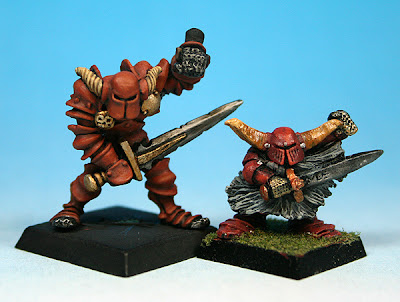 This may be the one case where I actually like the CW better than the MM90...but to be honest I think they are both pretty damn cool.  I'd love to see this guy completed with the shield.

So that leaves 3 more to do...Stay tuned for more!

Chaos...the BIG and the small...Part 3.5 Taking advantage of the daylight

This afternoon my wife was kind enough to take the kids and leave me home to fart around...BY MYSELF!  it was glorious!

Anyway...I got a little painting done on the next 3 Chaos Warriors...and they are coming along fine.  Being at my painting desk at a time of day when I'm normally at work I noticed that I get wonderful daylight at about 11:30 right now.

So I took advantage of the rare situation and snapped an "in process" photo using the day light.  I only had my iPhone available but it takes decent pictures. 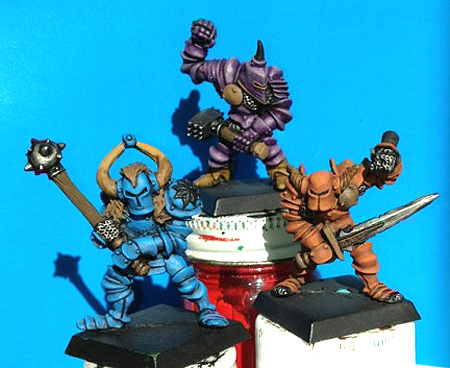 Hmmmm...maybe that blue guy shouldn't be photographed in front of a blue background!  Oh well...it was a rush job to get the pic before the light moved off desk.  Proper photos will come when complete of course.

These guys are about 80% done...mostly weapon hafts, hair, horns and gold/bronze bitz to go.  I hope to have them done in the next day or two...then three more to go...I'm sure HlH is begining to wonder if I ran off with his CWs! (sorry mate)...They're on the top of my list!....time permitting...;)

The Leagues are Coming!!!

So…one of my favorite times of year is upon us.  The stress and hassle of the holidays has passed…leaving happy children and an extra 10 pounds on my waist…;)  And now….its League Season!  “What League” you ask….well painting Leagues of course!  This year I’ll be involved in two different painting leagues and I couldn’t be more excited about getting back to the painting desk and cranking out some minis.

The Lead Painters League
For the sixth year the Lead Adventure Forum is hosting the Lead Painters League…a 10 week painting contest in which participants enter a new team of five painted/based figures each week…this team goes head-to-head against the team of another participant…points are awarded for each round and the participant with the most points at the end of the 10 weeks is declared the winner.  The contest is open to figures of any type and any scale…though 28mm are certainly the most common.
To liven things up a bit there are also a number of Themed Rounds in which participants gain bonus points for meeting the theme.  In two of the three themed rounds you also get bonus points for creating a 5-figure team of opponents to your original team as well.  The theme rounds are a lot of fun and really push ones creativity as well as painting speed….ten figures in one week may not seem like a lot to some people but is a REAL stretch for me.
The first Round of the LPL will begin on March 3rd…and is a themed round…Old Lead.  This theme requires that you use figures that were produced prior to 1991.  This seems to be causing difficulty for some members on the LAF…gladly almost my entire collection fits this category…so my difficulty will be deciding which old lead to paint!
With five weeks to go until the first team must be submitted I need to bear down and crank out as many teams as possible.  Last year I was constantly playing catch up because I didn’t get any teams “in the bag” before the contest actually started…that meant a lot of VERY late nights trying to frantically finish up my teams….I hope to avoid this fate this year.
The LPL is quite an endurance test…I survived last year but only just!  This contest is also interesting because it really pushes my photography and scenery skills.  Many participants place their teams in elaborate and effective scenes for photography.  Last year I relied on my painting skills alone…this year I hope to try my hand at creating a couple of “scenes.”   We’ll see how it goes….

The Brush Slave League
Over on CDO we have been conducting a monthly painting event called “Brush Slave” for the past year…it has been a very open and inviting format….but was beginning to feel a bit “stagnant.”  For 2012, event organizer Clam, decided to try a new model for the Brush Slave…and opted for a League style event.  The Brush Slave League is modeled off of the LPL but occurs over the course of a year…with a new round each month instead of each week…and employs smaller teams of three figures.  This will be a much more relaxed pace and I’m really looking forward to seeing what the participants over on CDO come up with for teams.  The members of that forum constantly impress me with their creativity and ability in converting, sculpting, and painting their figures.
The Brush Slave League will also build in at least one Themed Round…just to keep things interesting.  This League kicks off on March 1st
Conclusion
So…its going to be a busy couple of months for Blue!
My goals for these leagues include:
1.       Entering a new team for each round of both contests.
2.       Attempting some Scenic Shots for some teams.
3.       Selecting Teams that will compete well…but also forward the completion of my armies.
4.       Getting ahead of the Curve team wise so I’m not freaking out at the last minute each week/month.
5.       Having Fun!
As far as the Blog goes…both leagues stipulate that the teams must not be shown off on the web until they have finished competing.  This means that it may be a bit quite around here until the Leagues really get rolling…but then there should be a steady stream of new models on the blog for awhile.
In the mean time I have a few more Chaos warriors/MM90s to show off…and…I actually played a short game of WFB with a couple of friends right before Christmas…so I’ll work up a post on that as well.
Cheers for now!
Blue
Posted by Blue in VT at 12:33 PM 0 comments