While I still slave away in my giant batch of figures... (they are starting to look pretty good...but they ain't done yet...sigh)... I want to take a moment to show some pictures of a really cool figure I just received.  I think that many of you have seen examples around on the internet of Crooked Claw Miniatures Goblins...if you haven't then go check them out HERE ...When they showed off a new Goblin catapult a few weeks ago I knew I had to have it.  Plus the price was very reasonable.

I think that Crooked Claw is one of a small number of miniatures figure companies that are making new figures with the "oldhammer flavor"...and a nod to the Golden era of Citadel miniatures...much like White Knight's excellent Dwarfs/Goblins/Halflings (HERE).  The fact that Kevin Adam's is sculpting this range makes the quality of the work undeniably great...and this piece certainly lives up to that expectation

As you can see the set comes with a good sized stone thrower that is fronted by an wonderfully detailed and characterful "face plate" ...and three crew members as well as a small wind indicating flag.  The face plate certainly harkens back to the wonderful sculpting on classic Citadel war machines like the Lead Belcher and the Man Mangler both of which also sported excellent "face plates"

The wooden structure of the weapon is also covered with excellent little details.  Many of these details are reminiscent of the other classic greenskin war machine the "Skull Crusher" which was covered with similar faces.

Even the business end of the throwing arm has been given the "Kev Adams Treatment"  Check out this face? 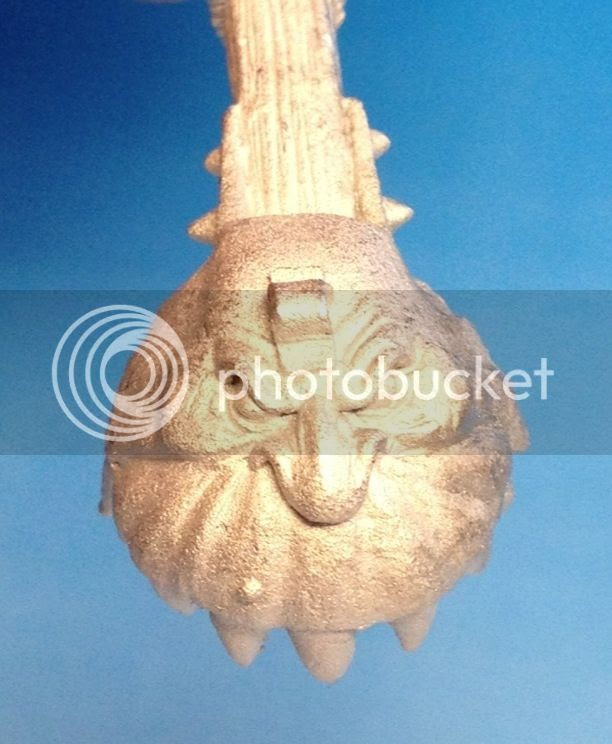 I don't often say that I'm excited to paint a warmachine...they are usually rather dull to paint...but this one is going to be a blast!  The hard part is going to be trying to decide what approach to take for painting all the faces on this wonderful sculpt.

The crew is also very characterful...particularly the commander...he is fantastic. 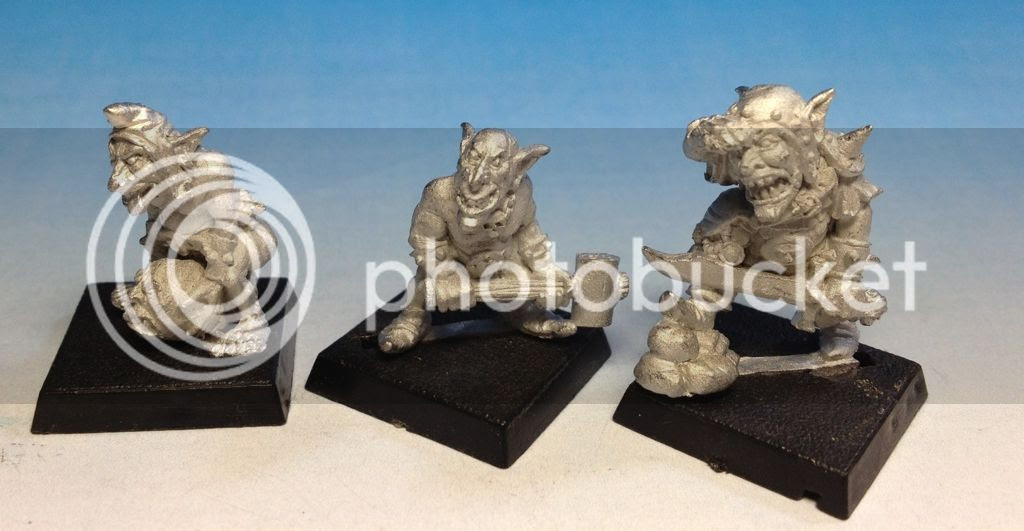 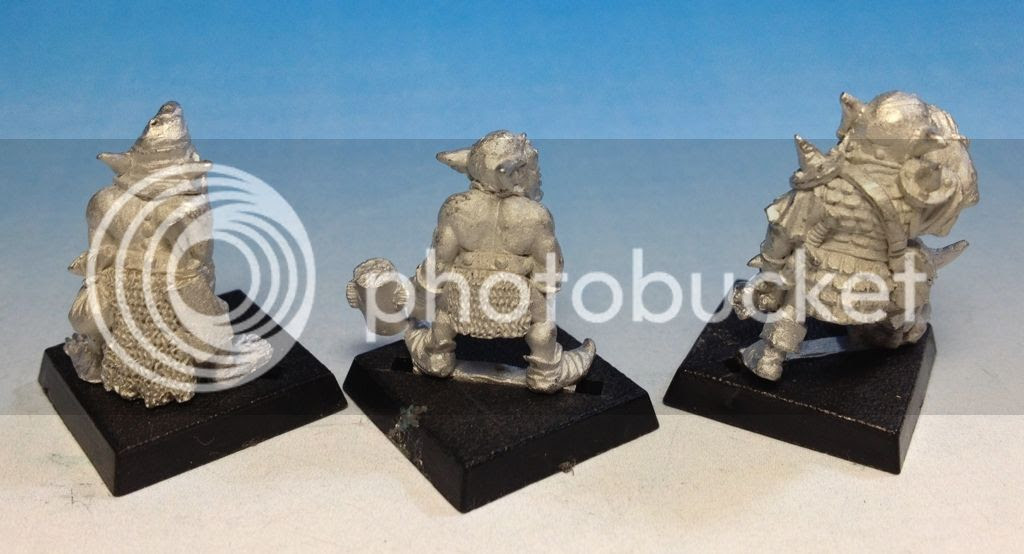 Anyway...if you need another piece of machinery for your Greenskin Horde...and you want a new take on the stone thrower that has a classic feel with new embellishment ...you should check out Crooked Claw.

As I am still in the midst of my batch painting madness I didn't come up with anything really original for this Brush Slave Entry but rather pulled three of my partially painted figures out of the batch and finished them off for the contest.

As you will recall I'm currently working through a group of about 35 figures that comprise a good chunk of the missile troops from my Bretonian based force...including a group of Squires with Bows, Mounted Squires and  Armored Bowmen.  I painted up a group of the Bowmen as one of my entries for the LPL last year and I've been using their color scheme as the basis for the scheme for my entire force...lets take a look at them... 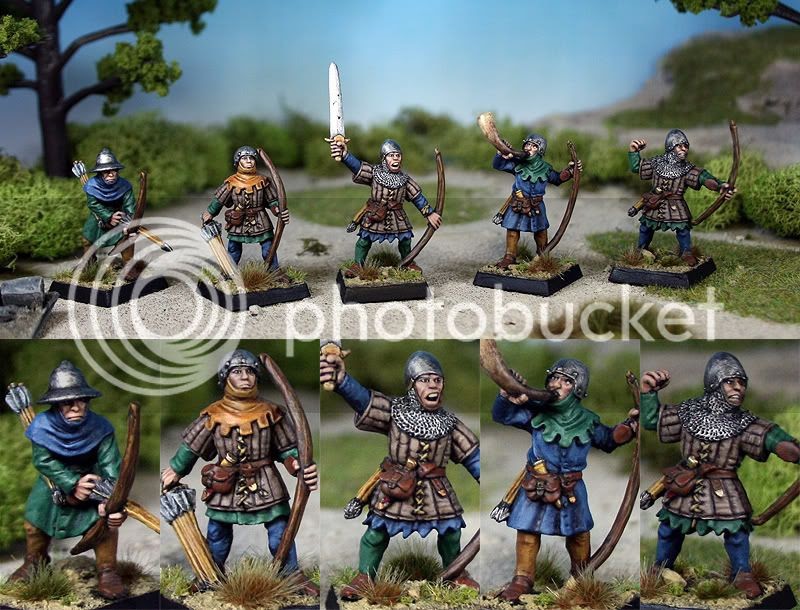 As you can see their uniforms are based on a fairly dark blue and a deep green with a tertiary color for their unit...in this case a tan/yellow.  I will try to continue the blue and green theme across all the non-knight units of this force...but I will try to vary the Tertiary color with each unit.

So...for the unit of Squires with Bows...which in my army will be the scouts...I chose to try a burnt orange color as their unit specific color.  As I have not worked with orange a huge amount I saw the Brush Slave deadline as a chance to crank through three figures with this color scheme allowing me to iron out the wrinkles with the color before I tried it with the other 15 figures.

And here are the results...

Not bad...the Orange is Ok...I think they will look better en mass than as a small group like this.

Overall the Batch painting is going very well and I'm making progress on this group.  At this point I have all the base colors on all the figures...and all flesh tones have been highlighted to completion.  Next I will knock out the highlights on the blue and green on all the figures.  Then I will break the big batch into smaller groups for each of the respective units to complete their tertiary color highlights and the fiddly bits on each figure.  Basing I may do as a bog batch again at the end.

I am certainly seeing the efficiencies in this type of painting as I've gotten a lot of figures a lot further along in a relatively short amount of time compared to when I was painting 3-4 at a time.  Its does get tedious painting one color all night...but not enough to make me stop...when I have a couple of complete units at the end of it it will all have been worth it.

I would love to show a picture of the progress but I'm planning on using some of these figures as entries in future painting contests...many of which forbid showing figures before they "compete"  So once I narrow down which ones will be competitors in the future I'll show the "bench warmers" as examples of my progress.

As the Batch painting continues to cruise along (perhaps 30 mini in a group is a FEW too many!) I thought I would fill the gap by posting the pictures of my Golden Gobo II entry.  For this contest I chose to paint a unique miniature in my collection...the classic Zoat Wizard sculpt.  A truly classic figure and a new challenge for me as far as painting goes...I've never painted a Zoat before!  Now I just need to finish collecting and assembling a Wood Elf contingent to go with this guy.

Anyway...here are the photos and below is a bit of Fluff I wrote about this character and his stat lines.

Spikk cowered under the over turned wagon.  Around him was a scene from a nightmare.  The rest of the orc wood cutting team lay in tatters around their work site, pieces of equipment and bodies were scattered about.  From behind him he heard the sharp sound of another blue bolt of electricity tearing one of the ladz apart.  He scuttled a little further back under the wagon.

Spikk whimpered uncontrollably, terror stealing what was left of his wits.  They were only cutting firewood for the armies’ camp over the hill!  They hadn’t harmed anyone or anything (well, today at least!)  The wood cutters had been hard at work when the creature suddenly emerged from the forest.  With an enormous mace in its right hand the abomination smashed anyone who was within reach; with the lightning from the red orb in its left it smote anyone who attempted to run.  It was a bolt of the lightning that had flipped over the wagon Spikk had been riding.  The wagon that now hid him from the view of the creature.

The tread of the beast was amazingly light considering its enormous size.  As it came around the wagon Spikk was not aware that it was drawing closer until it entered his field of vision.  It had a huge four legged body as large as a bull but with a torso, arms and head like orc attached to the front, but more “reptilian.”  It was mostly covered with thick dull grey scales which Spikk had seen the axes of his mates fail to penetrate.  The torso and head were more greenish in color but were heavily muscled. The monster’s face was surprisingly gentle looking considering the destruction it was currently inflicting on Spikk’s mates.  Perhaps more disturbing than its size or obvious power, was the fact that the creature had made no noise as it went about destroying the woodcutting party.  It had remained completely silent.

Now it was looking for survivors.  Spikk saw it examining each of the bodies to insure it was dead.  It also seemed to sample the air, its head and neck swaying from side to side as it sought its prey.  Perhaps it was his stench that gave Spikk away?  Whatever it was the monster’s head snapped to the right and peered under the toppled wagon looking Spikk directly in the face, its eyes glowed with massive intelligence, and flared with massive fury.
It turned and approached the wagon.

Spikk wanted to run but his legs wouldn’t respond, though his bladder did.  He was frozen in fear.  With casual ease the beast grabbed the edge of the wagon and flipped it up and off of the cowering orc sending it crashing off behind him and leaving him curled in a ball on the bare ground.  The reptilian centaur gazed at him for a moment, examining him.  Spikk felt as if the monster was looking straight through him at his black shriveled soul. Not knowing what else, but knowing he must break that aweful gaze, the orc gulped some air and managed croak:

The creature was roused from its revelry by the orcs words.  The orb in it left hand glowed and crackled with energy, it raised the mace in its right hand high, and the same time it lifted its right leg off the ground, the enormous “foot” casting a dark shadow over the whimpering orc.  Still it uttered no sound, but as the foot descended on him an enormous rage filled voice exploded inside the orcs head.

Equipment:
Loorassh carries only his large mace as a weapon (treat as a hand weapon) though he can choose to wield it with both hands if he feels he needs the S bonus.  The orb that Loorash carries was a gift from a woodelf mage, and though the item itself does not contain magic, it acts as a focal point for the Zoat’s own massive magical powers.  The Zoat wears no armor.