Well...after more than two weeks I'm finally emerging from my post-LPL exhaustion and finding the time, and motivation, to think about upcoming projects to tackle.  I still have a few lingering things that I need to finish up for other folks...but my attention this weekend turned toward a new contest that we have just set up over at Bugman's Brewery.  While we will continue with our normal monthly painting challenge there has been some discussion of having a Unit painting challenge as well.  So starting on June 16th members of the forum are encouraged to select and paint a unit of no less that 10 models including a command section.

Luckily for me on almost exactly the same day that these discussions were finalized I received a box in the mail from White Knight containing his latest Puff and Slash Dwarf offering....the Zweihanders!  These little guys are the dwarf equivalent of the Landsknecht Dopplsoldners or Double pay soldiers....who were often some of the largest soldiers...and they were frequently armed with large two-handed swords.

I've have been eagerly awaiting the release of these models and they do not disappoint...they are quite remarkable in the quality of the sculpting (thanks John P.!) and the cleanness of the casting.

The range includes a complete command section...with a dwarf bag piper!...though I have chosen a different leader for my force...as you will see below 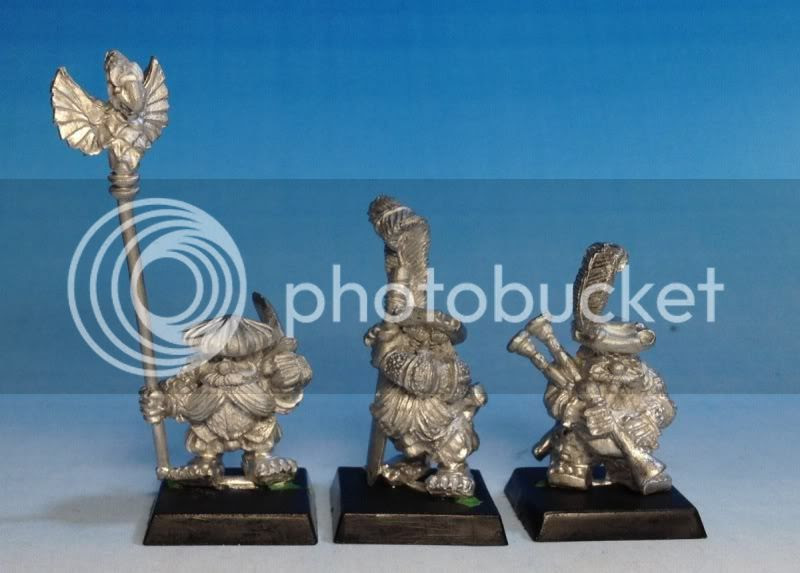 There are 4 single piece castings...some may call them the "action" poses 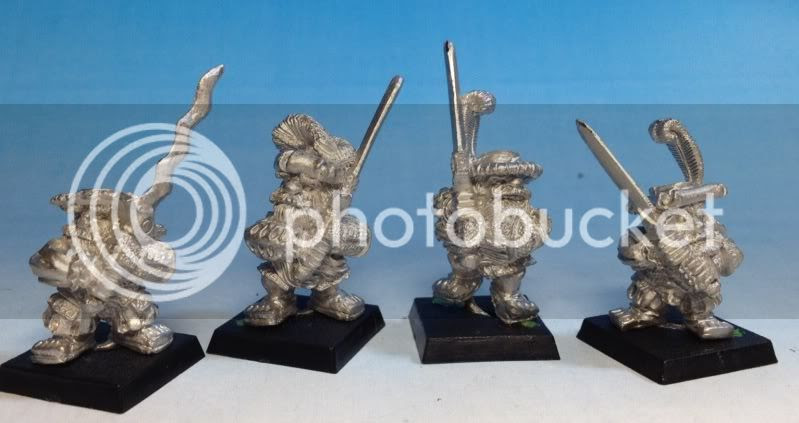 And there are 4 "unit filler" sculpts that have a more static pose and separate heads allowing you to make a variety of different "fillers"  While I love heads that came with the these two-part castings I had one sallet clad head left over from WKs infantry models that I was hoping to use....and luckily it took only a little modification to make it fit.  Here they are as built by me...

The second one from the lest is the pick of the litter IMO...He may be a new member of my top-5 favorite dwarf models ever....he is going to look bad-ass when painted up.  Third from the left...with the Sallet... is the guy I will be using as my unit hero.

I did use a bit of Green Stuff to ease the transition between the heads and bodies...this was not completely necessary but as these troops will become one of the elite units of my army I wanted looking their absolute best....The GS work is most evident on the backs of the models

So...if you have been counting...thats 3 command section figures....4 action poses and 4 unit filler poses...for a total of 11 figures.  11 is an uncomfortable number for a unit...so I decided to add one more great sword wielding dwarf to my unit.  I'll go out on a limb here and suggest that this guy might have inspired this whole batch of figures...he is one of the greatest Marauder sculpts produced in the late 80's and early 90's...one of the coveted MM15s 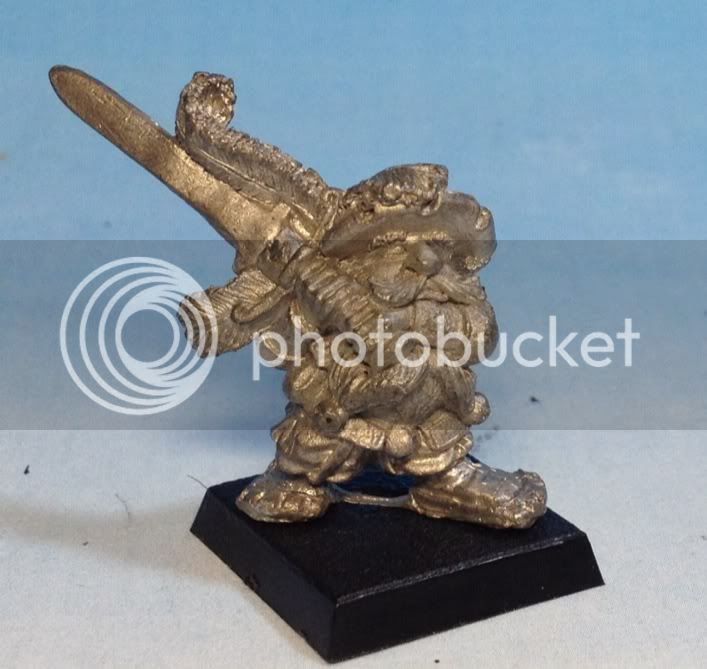 Despite more than 20 years, and different sculptors, separating this figure from the new WK offerings...you can see that he fits in perfectly....and here is the proof....a shot of the unit as a whole.

So...for the contest I will have to have all these guys painted up by mid August...I think that's doable...keep your fingers crossed!

Oh...yeah...and if you are interested in getting some of these wonderful figures for yourself make sure to stop by White Knights Miniature Imperium and look at all his wonderful offerings...click this link to see for yourself:  http://whiteknightminiatureimperium.blogspot.com/search/label/All%20posts

Cheers for now...I'll be posting WIP shots of these guys when I actually start slapping some paint on them.

Well the final round of the LPL has just wrapped up and I can present my final offering to you.  Round 10 was brutal for me...Ideally I would have completed two teams of 5 figures and a piece of scenery to maximize the number of bonus points I would receive.  In the Real World....sigh...I was laid low by a severe sinus infection and dogged by constant field work at the work place.  These factors added up to very little time for painting...so I was happy to even finish 5 figures to an acceptable standard.  I'm pretty happy with how they came out...sadly they went up against Abu Iskander's amazing entry which included all the possible bells and whistles.  My hat is off to Abu....his set up was top notch both in the painting and the photo composition.

Here are the figures I entered: 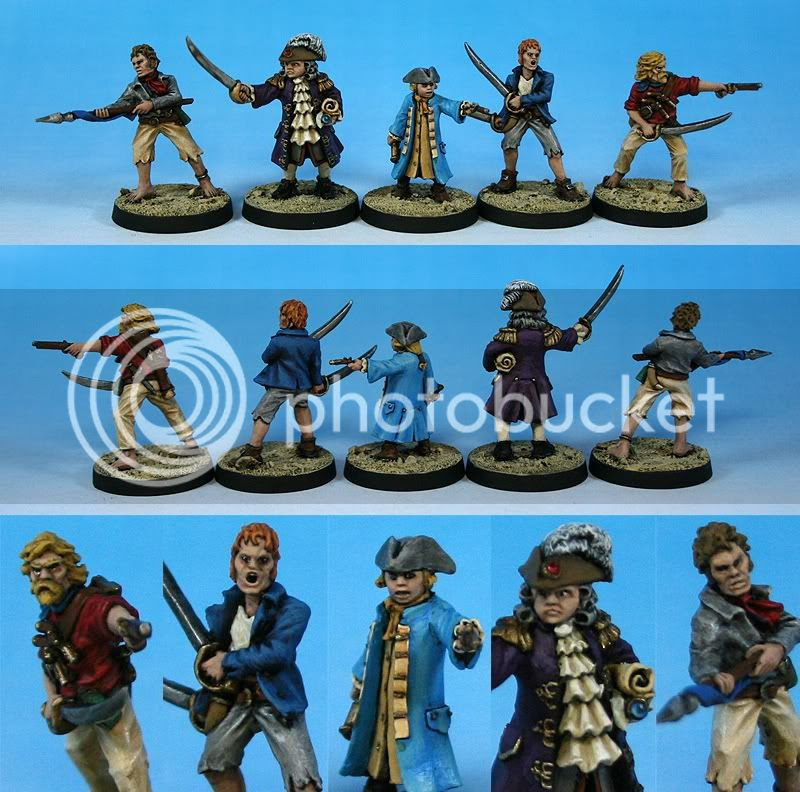 So that brings LPL6 to a close.  Its was fun....it was hard...it was instructive...and it was humbling. To be honest I'm not really sorry that its over....the pace was really hard to maintain this year.  Too many other things were demanding of my attention...but I'm looking forward to participating again next year...and I have a game plan for how to take some of the stress out of the competition.

In my next post I will have a more thorough discussion of my thoughts about the contest as a whole and about how I did on achieving the goals for the competition that I laid out before it started.

Once again sorry for the delay in getting the last LPL entry up in a timely fashion. The fieldwork I've been involved in with work has kept me awaY from home and from Internet access....plus I got pummeled in round 9...which makes showing off a team of losers a little less appealing. I'm trying not to take it too personally....I was up against Bugsda who is one of the consistently great painters that competes in the LPL...and my team was pretty rushed so I couldn't expect too much. For round nine I choose to do a team of Marauder world riders from the MM32/34 ranges. These are some of my favorite goblin sculpts and are a good counterpoint to the boar riders I did for an earlier entry. I'm also a big fan of the wolves that Marauder was producing at the time. They have great character and style...particularly when compared with the terrible plastic ones that eventually replaced them with later releases. Here is my entry photo and a couple of detail shots of one of the pieces...I'll try to get some more close ups when time allows. 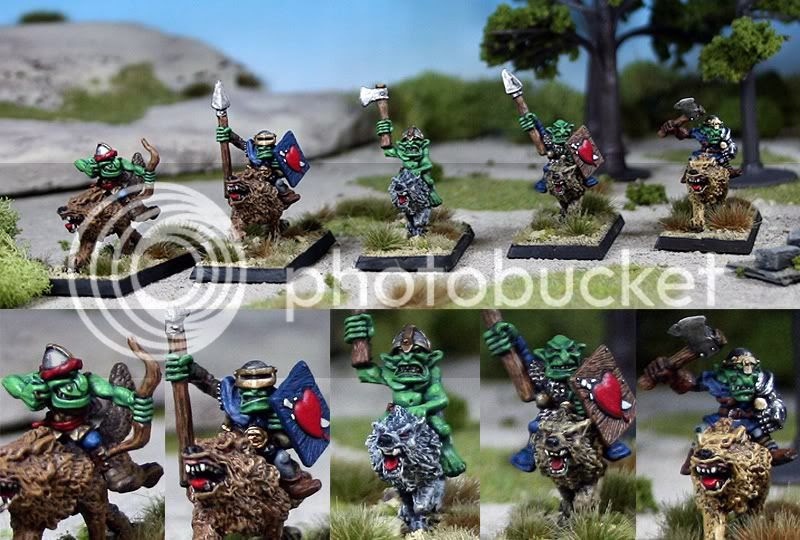 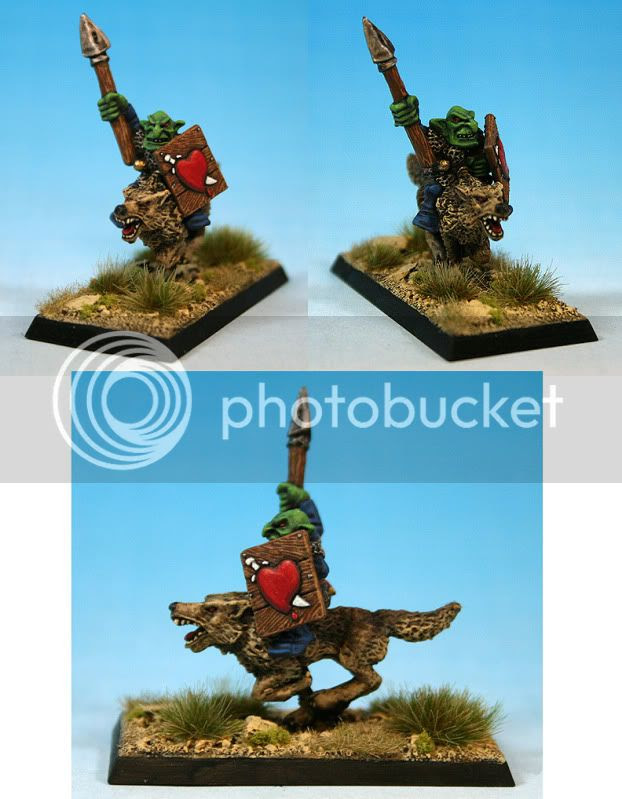 Sorry for the delay in getting this weeks LPL entry up here on the blog...once again "real" life conspires to make my life as difficult as possible.  I'm been spending at least half of each week out in the field getting nothing painting related done...and of course I am frantically trying to get the 10 figures for LPL round 10 done to a decent standard.

Anyway...here is my round 8 entry...consisting of a more of the excellent Marauder "Norse" dwarfs that have been assembled for my warband project.  This team felt like quite a rush job to me but it seems to have done well in the contest.  I was up against a wonderful entry by one of my favorite LPL contestants: Lt. Hazel.  His works are a constant source of inspiration and this one was certainly of very high quality.  In fact I was quite surprised that voting went my way this week...so I would like to take the opportunity to applaud Lt.'s work on his entry.

Well after all that...here are the dwarfs...once things settle out a bit I'll get a shot with the first group of Dwarf Adventurers. 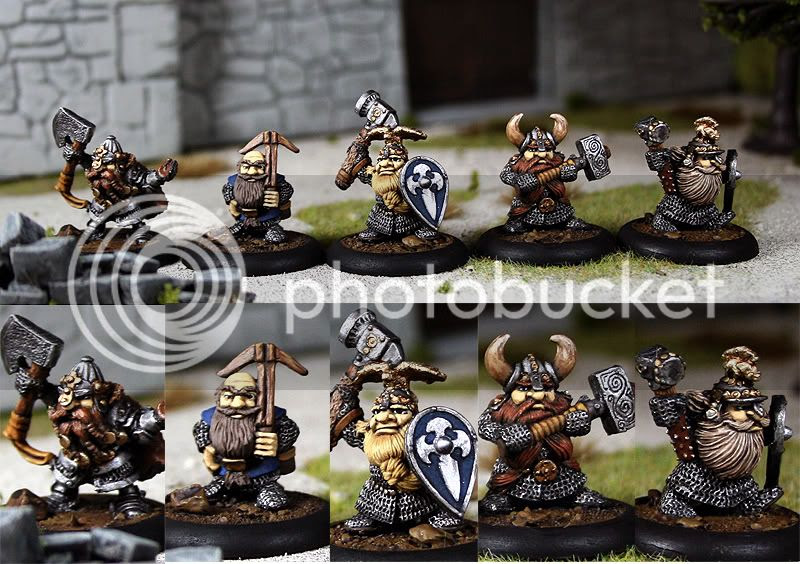 Ok...off to work on round 10 some more...I can't wait to get some decent sleep when this is all done with!