Merry Christmas to all! And to all another night...

...the fire from the wasteland nomads slackened for the first time in what seemed like days...there was a loud series of explosions and gunshots from their lines and then a few moments of relative peace.  The siege of Old MacDonough's farm had lasted for days and moments of peace had been few and far between since it began.
Skeezics took the moment to slap one of his last two magazines into his smoking auto gun and then peered over the top of the baracade again to see if he could discern the source of this moments respite.  But in the chemical and shell blasted remains of the crop fields he could see nothing.  In the small clump of battered woods beyond he heard another series of explosions and cries from wounded nomads.  Skeezics couldn't see who....but some one was giving the nomads hell.  This brought a breif smile to his face...the first of those in many long days as well.  Frankly he didn't care who was killing nomads...he was just happy they were dying.
Suddenly from the billowing clouds of smoke and fire that now filled the woods beyond emerged a strange figure.  He was trotting nonchalantly across the blasted wasteland toward the defenders baracade.  Skeezics drew a bead on the man...but realized that he wasn't armed and didn't seem to be a threat.
"Hold fire" he shouted to the few remaining defenders of the baracade and glanced to either side to ensure that no one blasted this stranger before they determined his intentions.
Suddenly several lines of tracers emerged from the woods directed toward the stranger.  He increased his pace and sprinted nimbly toward the baracade.  Skeezics could now see that he was dressed in a red coat and hat and seemed to be carrying a large sack of some sort over his shoulder...his face covered by a gas mask...a reasonable precaution when traversing the chemical wastelands.
The defenders stared in shocked silence as this strage figue approached and then hopped over the baracade...bringing his heavy load with him.  As the defenders gathered around, the stranger said nothing but reached into his sack and handed each a package. Some received boxes of ammo others med kits and some were given MREs.  They all muttered their surprised thanks at this unexpected, and much needed, resupply but received no response in return.
Once each defender had received their packaged the strange man gathered up his sack and hopped over the baracade once again and disappeared into the fog of war...he hadn't said a word...but as his silhouette faded into the mist they heard:
"Merry Christmas to all and to all another night!"
The defenders all stared at each other in stunned silence...not sure what to make of this unexpected experience.  But the moment of peace was suddenly shattered as several mortar rounds exploded near the barn and nomad fire once again began to shred the baracade behind which they sheltered.
Skeezics checked his weapons load...racked a round into the chamber and peered back over the baracade looking for a target, the surprised smile still on his lips a new found feeling of confidence that they might actually survive to see another night... 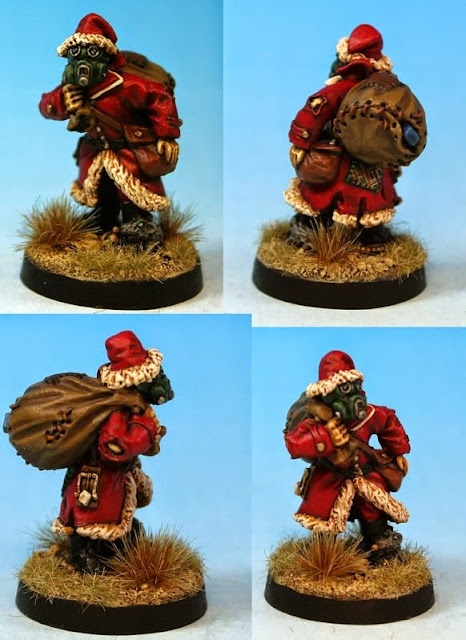 Merry Christmas and Happy Holidays to all my Oldhammer friends...I hope you all enjoy whatever time off you have and get a lot of painting done!
Cheers,
Blue
Posted by Blue in VT at 9:42 AM 6 comments

After I finished up working on Johann (pic forthcoming once I finish his base) I turned my attention to working on some of the Dragon Bait Miniatures from their ongoing indiegogo campaign.  https://www.indiegogo.com/projects/dragon-baits-second-28mm-fantasy-campaign
In particular I've been slapping paint on the executioner figure and his halfling helper. I'm really loving these Tim Prow sculpts.
So before I left for my Christmas holiday back in Ohio with my parents I managed to get the flesh and black cloth areas finalized.  I'm not sure how well the shading on the black will show up on these iPhone pics but here is the current status of these two figures. 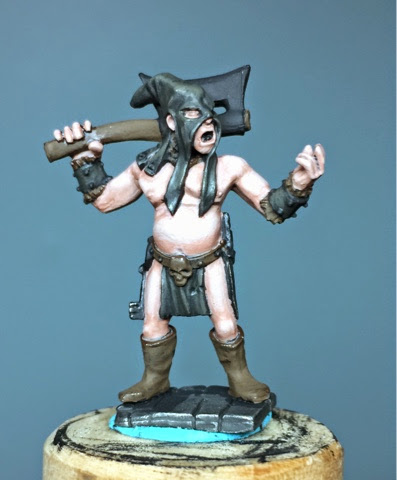 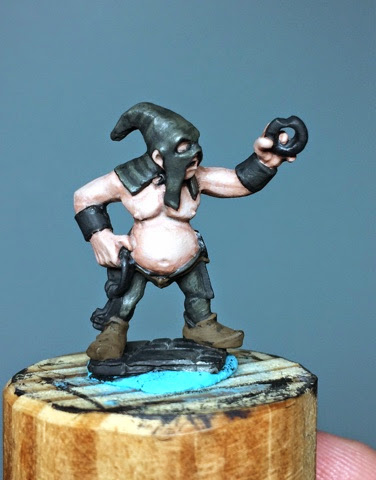 Work will resume in these as soon as I am back in VT after Christmas.
Be sure to stop by the Dragon Bait miniatures indiegogo campaign page and offer your support if you want some character figure to use in you Dungeoun adventures.
Cheers,
Blue
Posted by Blue in VT at 1:44 PM 1 comments

Just a quick update to show how Johann is coming along.

All that is really left to do are a couple of touch ups and the base.

I've been plugging along with the variety of models that I previewed in my last post.  My main effort has been focused on finishing up a copy of Johann from the Ewal Dvergar Range that Clam has graced us with.

I've had this miniature for way too long...mostly because I've had a hard time figuring out what color to paint him.  Obviously I painted my copy Blue...but I couldn't decide what would look good on this copy.  Finally I decided to go with Dark Green armor with Copper/Gold and Grey accents.  To this end I set in on Johann's armor first and then got to the base coats on the wood, metallic, and grey areas....

Here is how he looks right now...

Not looking particularly stellar yet...but once I start to highlight everything else up it will improve greatly....

...However...I really put a lot of work into his shield.  As I mentioned when I painted my own version of this figure the Shield is one of the best parts...John Pickford really seems to have enjoyed making this fantastic face.  With looking at the design of the shield ...and the fairly tame colors of the armor that I chose for Johann... I decided to go a little wild with the shield colors.  In really staring at the shield for quite awhile I really started to see how it looked like flame...

...perhaps this is a demonic piece of armor containing a fire daemon of some sort? ...forced by one of the Chaos Lords to protect Johann from harm....

This turned out to be a lot of fun to paint...and it took a TON of layers to make it look convincing.  Having never really attempted to paint flame before I'm pretty happy with the results.  The main portion of the shield is orange flame while the eyes and tongue are meant to look like blue flame.

Here is a quick look at the final product....followed by a short movie showing the steps of the process.


For those who are curious about such things...here are the paints that I used to achieve the flame effect...


And here is a shot of my wet pallet showing all the different layers that I created with these paints and their sequence (ignore the green...that's from the armor). 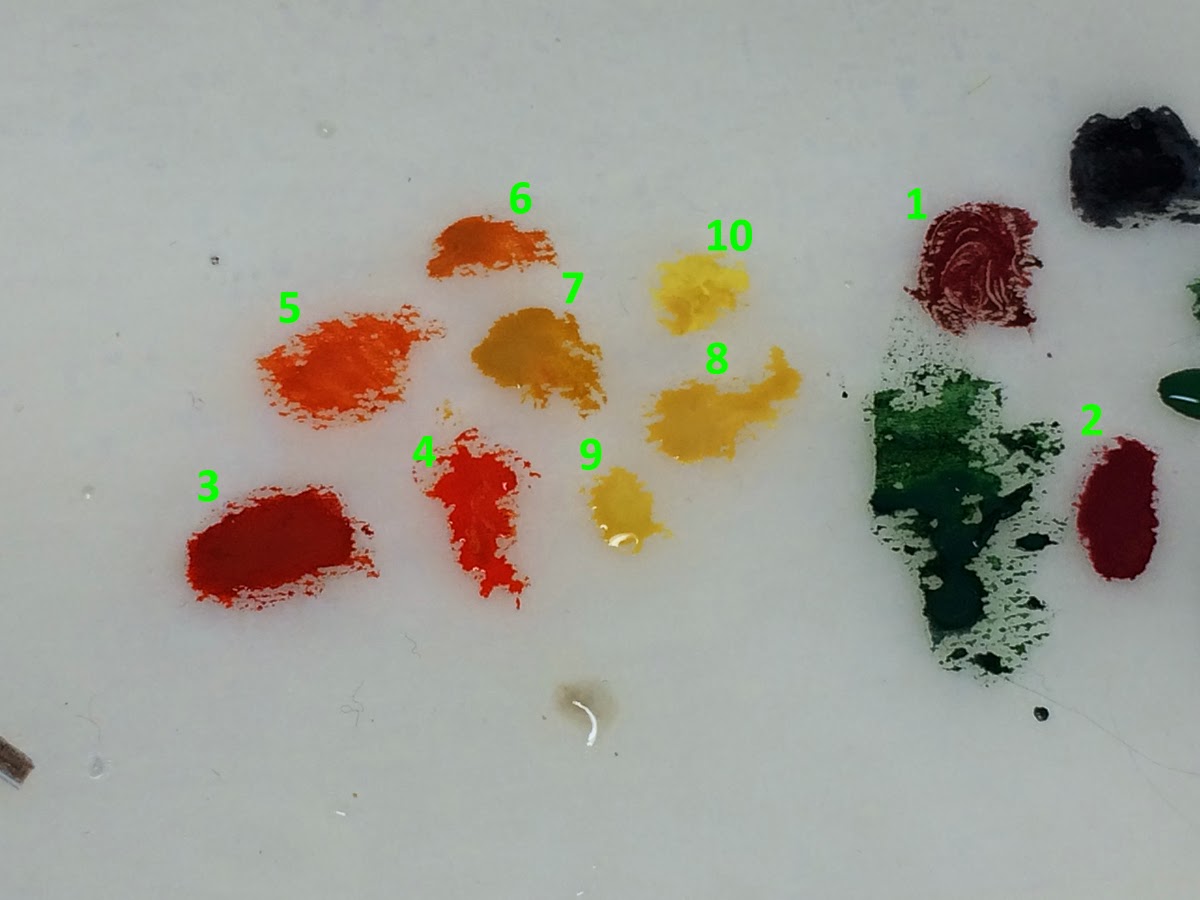 I think that is going to look pretty sweet on that green armored model...so...

I better get back to it! 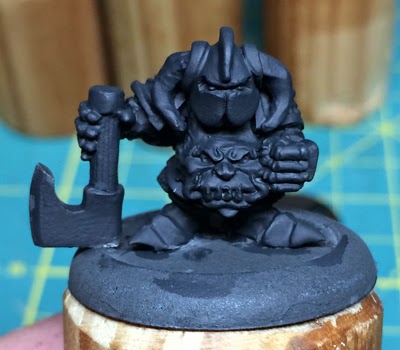 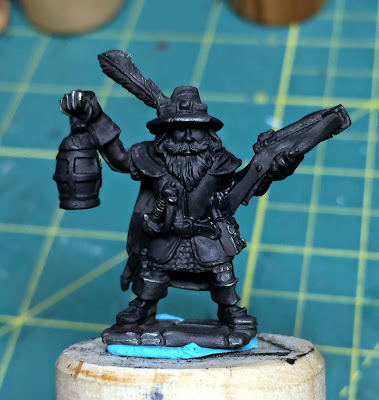 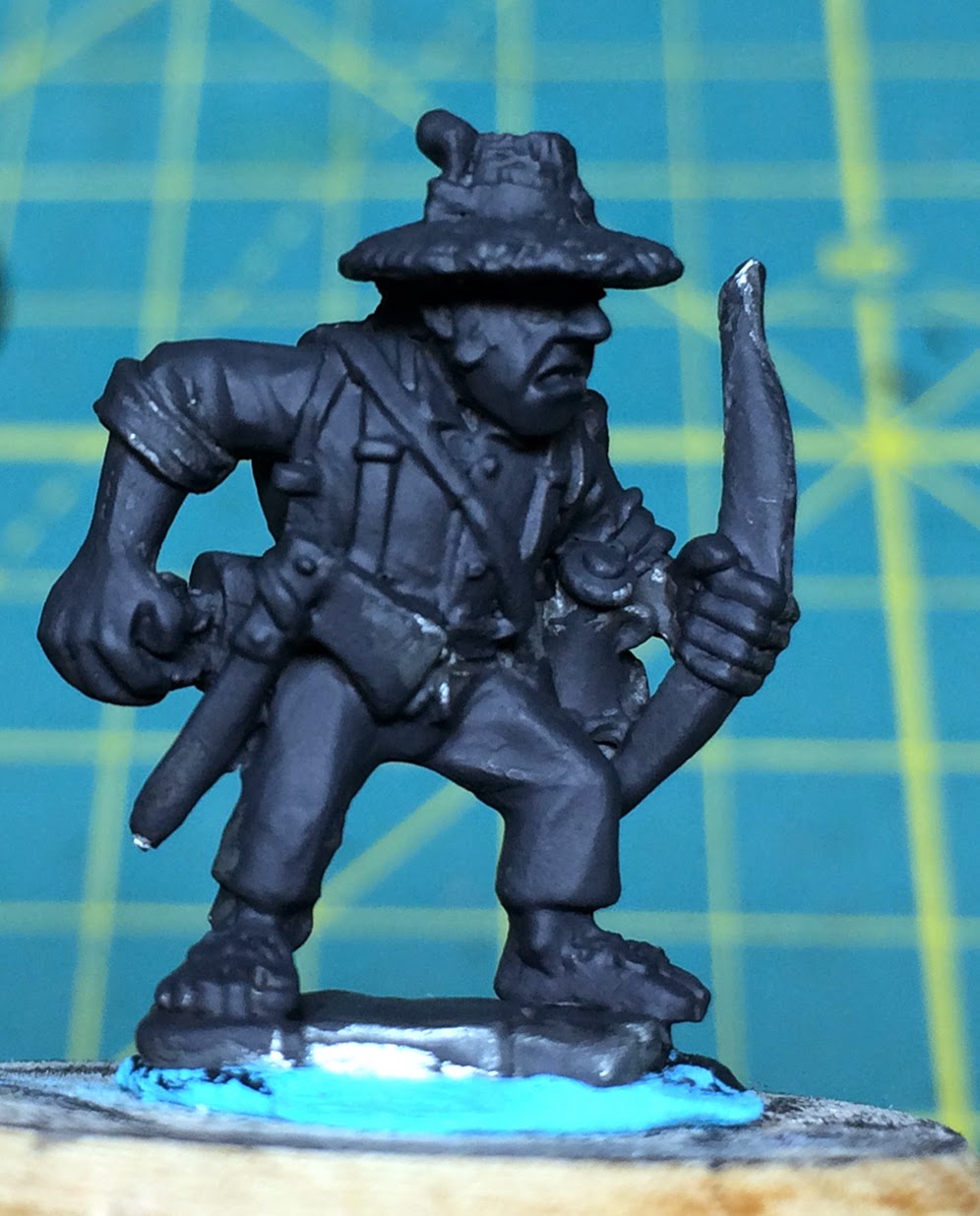 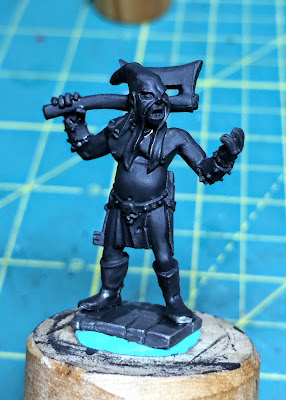 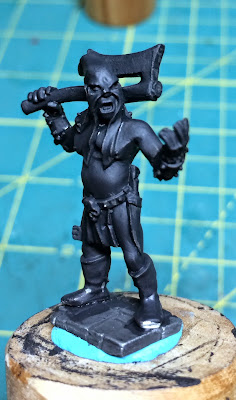 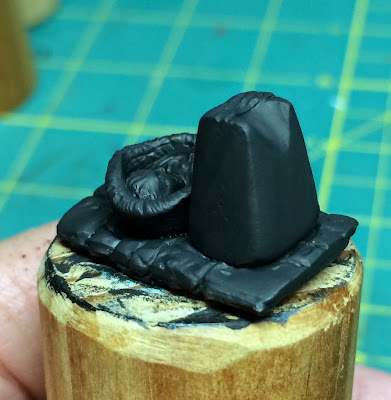 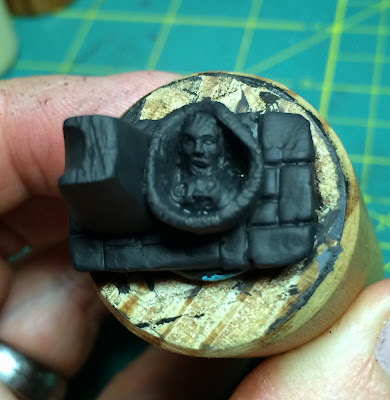 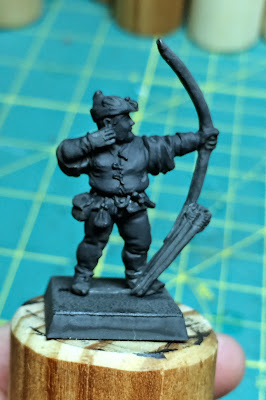 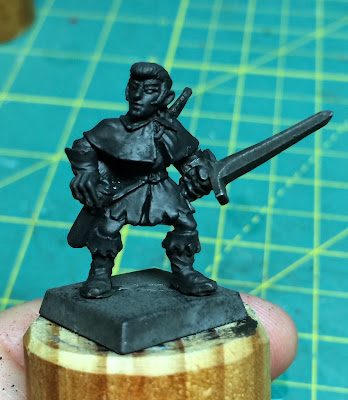 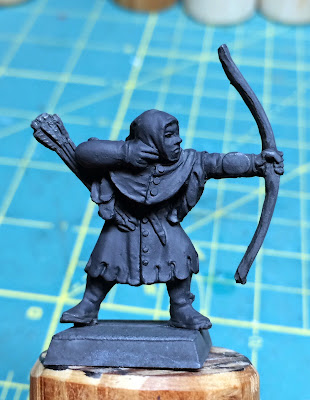 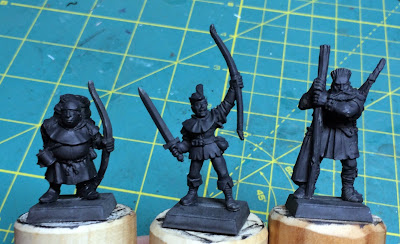 Just a quick post to show you the basic setup I've put together of my Battle Systems Sci-Fi terrain.  I've had this stuff for months now and have just not had the opportunity to put it together and start enjoying it.  This week I forced myself to spend several evening focused on producing at least a basic board to play on.  With the help of a couple of committed friends we produced this set up. 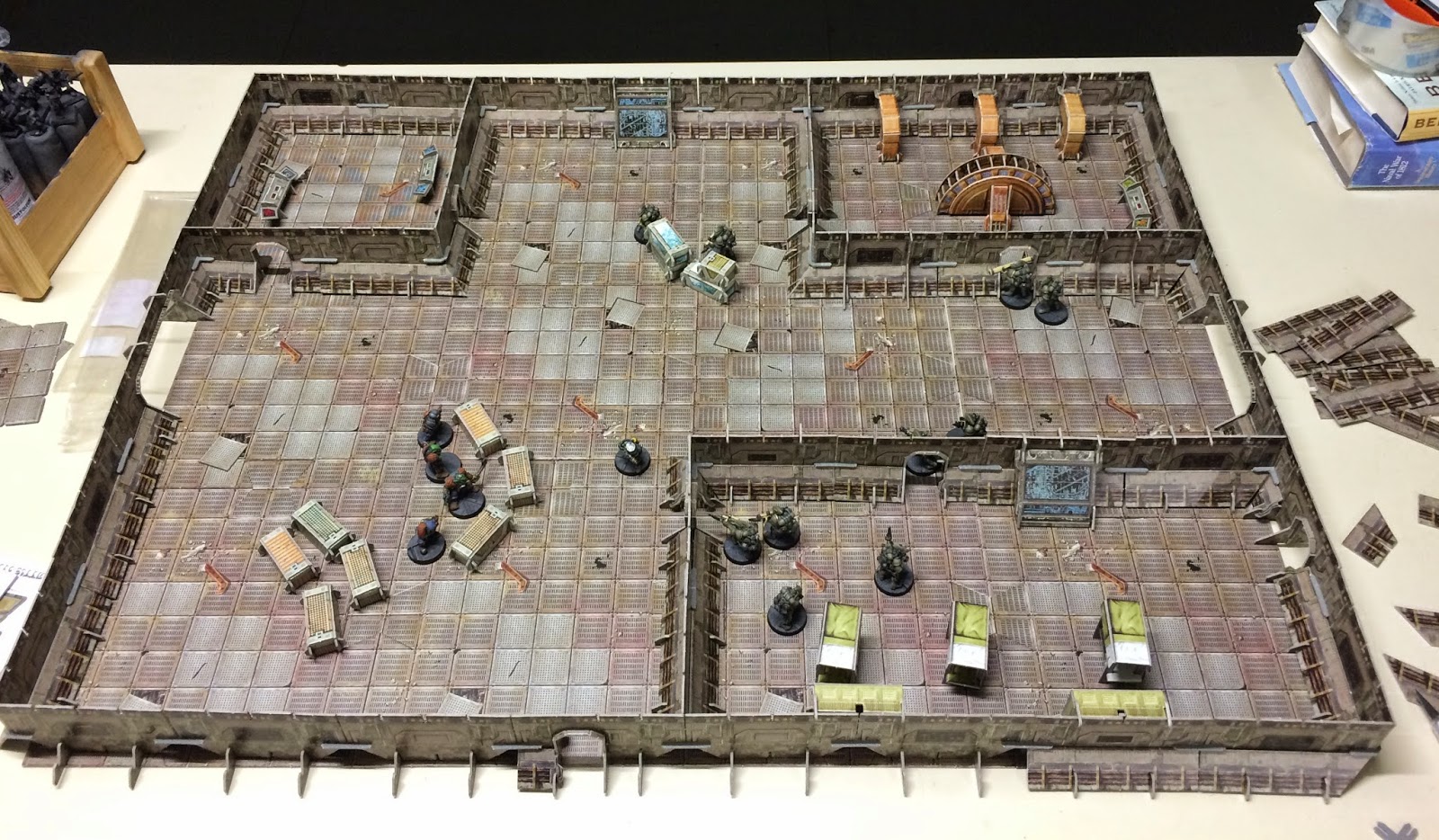 I will try to get a few more room items put together before things kick off but either way this will be a fun little set to get some experience adapting the RT rules to interior spaces.  I see running a number of quick scenarios tonight...snatch and grab, meeting engagement, sabotage the reactor, Get to the Chopper!, etc.  With only 2 1/2 squads of figures painted up they will obviously be limited in scale but should allow for fairly fast games that we will learn a lot from.

Here are some more pics of some of my troops trying out the terrain.  Please forgive the iPhone pics. 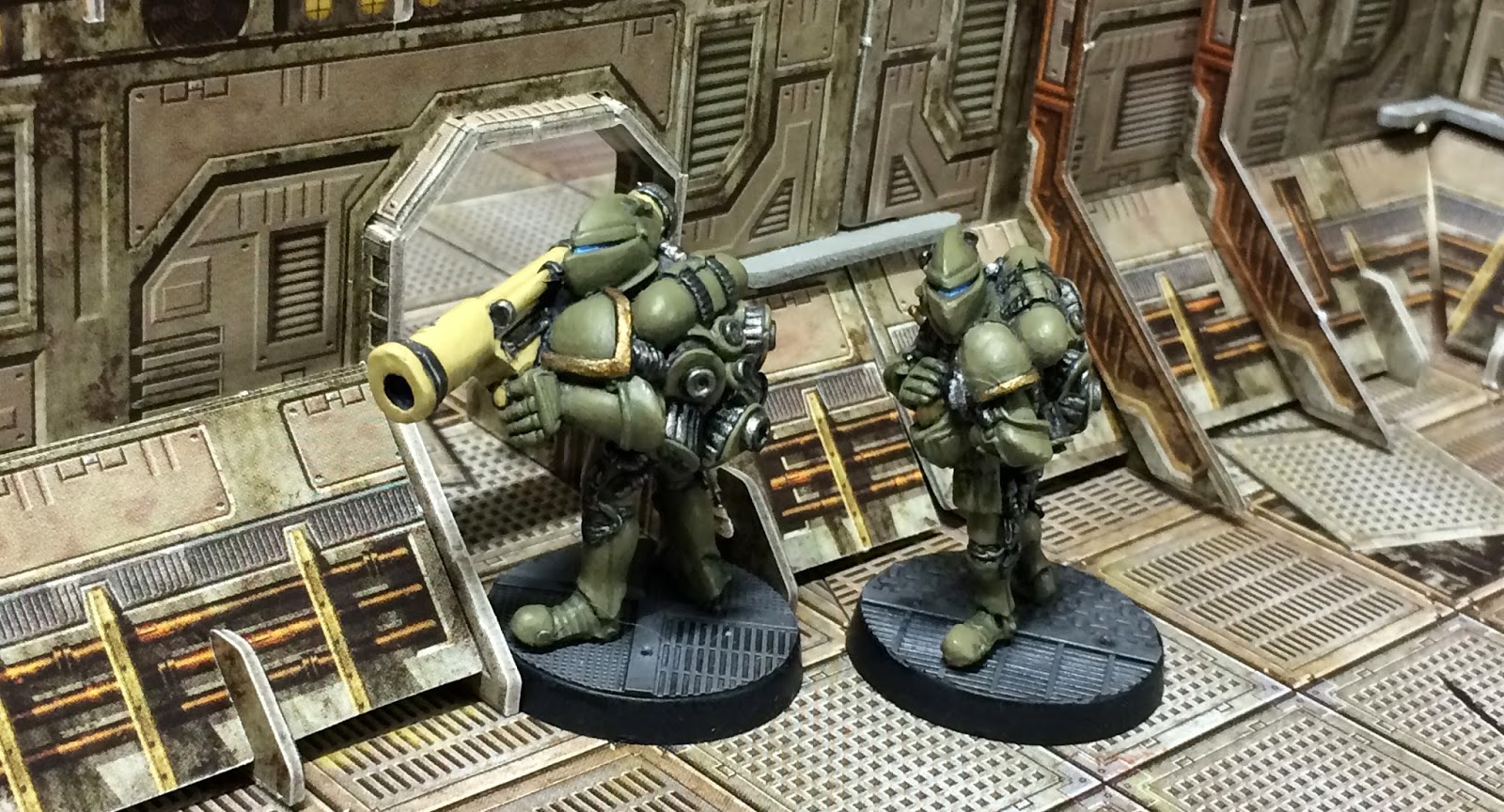 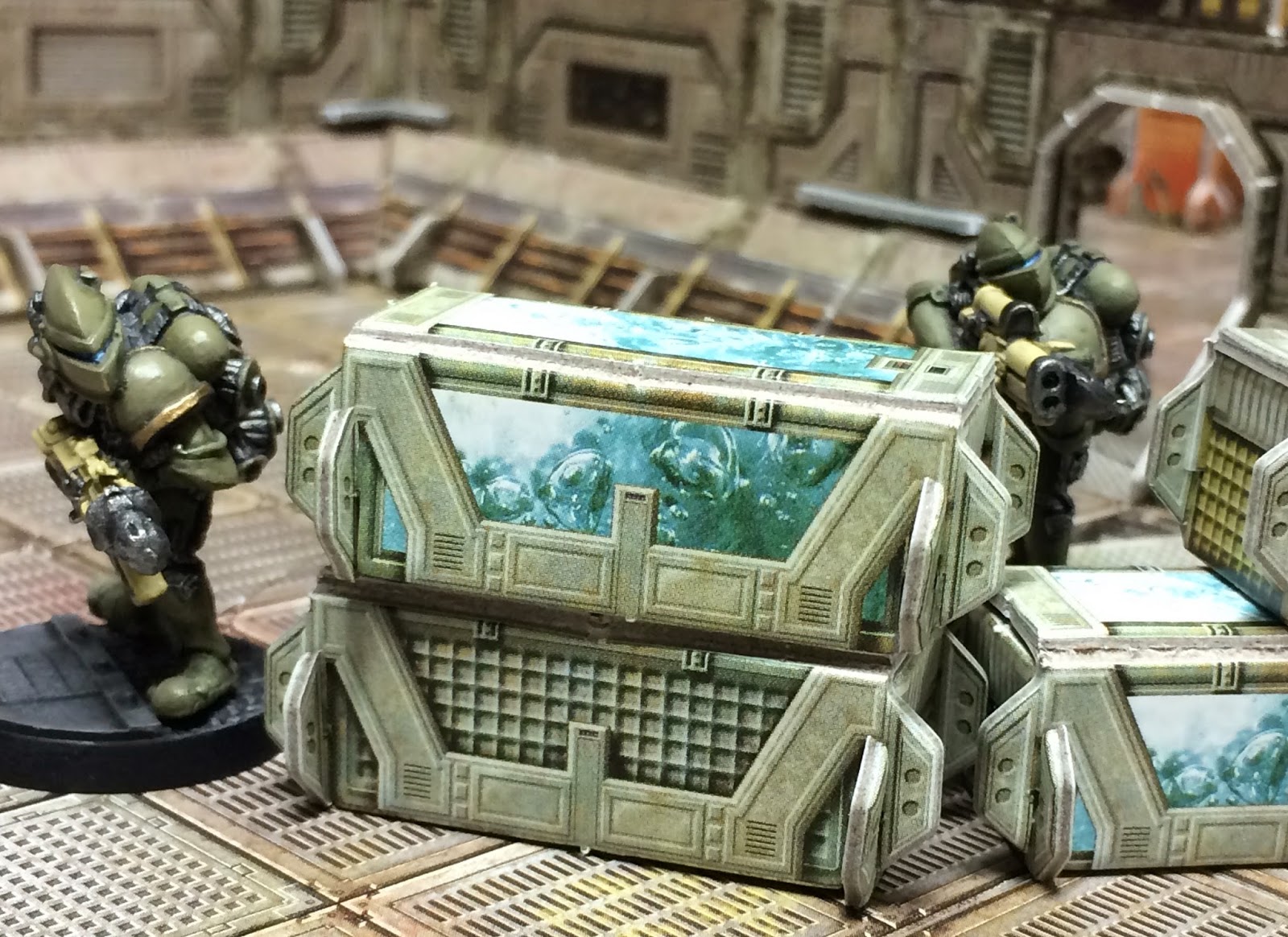 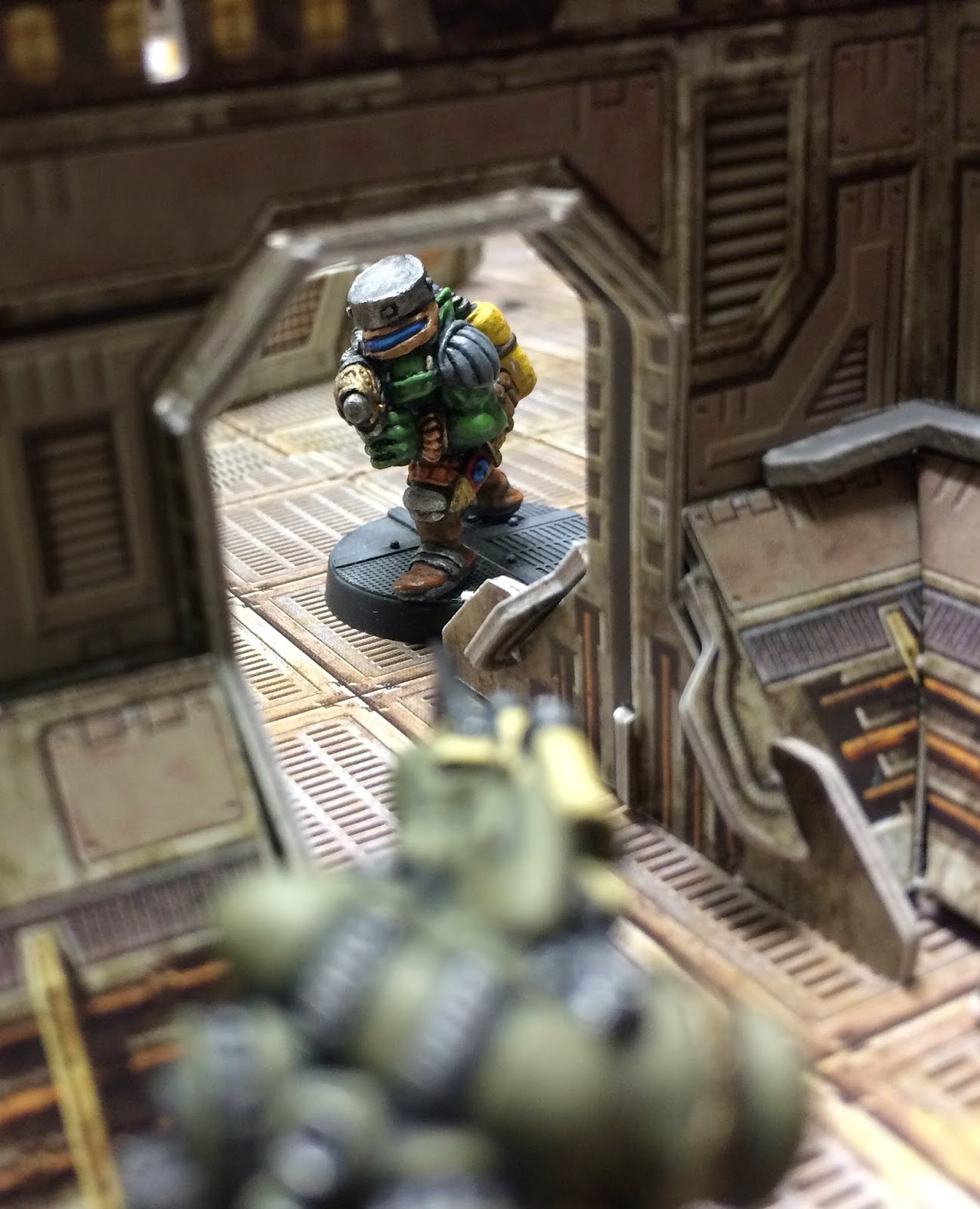 I'll post up some pics and breakdown of the nights events over the weekend!

Despite the lack of obvious evidence in the form of Blog posts...I have been plugging away at a number of hobby projects but have failed to finish anything of late that is worth writing a post about....

...So I'll do a quick post about my continued efforts to find decent horses for my 3rd ed Brets....and show that I actually have been painting.

I've never been a big fan of Citadel's plastic horses...They vary drastically in proportion depending on release date and the number of variants possible is usually quite low.  For this reason I've been searching high and low for some decent metal horses that I could mount my knights on.  After a detailed discussion of this topic on the Oldhammer Forum...and encouragement by fellow Oldhammerers who have trod a similar path I've placed a sizable order for 20 metal, barded horses in a number of poses from Front Rank Miniatures...


...and they showed up while I was away for Turkey day!  here is what I received. 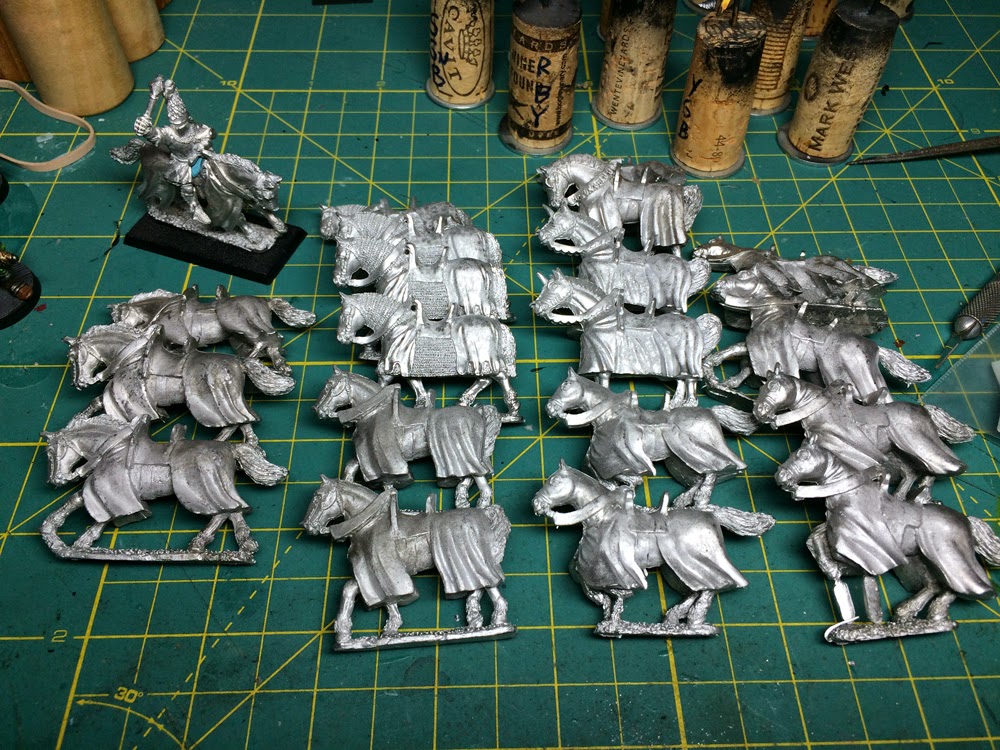