Well folks by faithfully following my little slice of the blogosphere you have seen me accomplish a bit of painting, followed some of my obsessive collecting, and seen me try out new games like Cavern Crawl...what you haven't seen is me actually playing a game of 3rd edition...well that is about to CHANGE!!

On the Tuesday before Thanksgiving I bribed (with food) three of my buddies into joining me in my geek cave (basement) for a basic game of WFB 3rd edition.  I have given up on trying to find current WFB players in my area that are willing to play 3rd edition...its just TOO frustrating...and I've decided to make my own Oldhammer Players by brainwashing some of my friends.  These guys have heard about my collecting habit and some have seen me putting my "toys" in baths of various solutions at work in a effort to strip off the horrible paint jobs, but none of them have any experiece with the game itself....so they have not been tainted by the competitive, list driven, crap that passes for WFB these days....perfect fodder for 3rd ed. brainwashing!

To this end I whipped up a couple of quick lists based on the figures that I wanted to play with...they both ended up in the region of 1400pts...based on the Warhammer Armies book.  The units were uniform in their composition...no heroes, no banners, no musicians...and each army was lead by one Character model, or general.  Additionally each army had one big gribbly.

On the "good" side, led by Alex (and me where needed), we had a force of dwarfs which consisted of:
On the "evil" side, led by Tom and Brian, we had a force consisting of Greenskins and Chaos Dwarfs..as follows:
Here is a Picture showing the Battlefield and some of the forces to be involved...These are all iPhone Shots...and the lighting in my "cave" is pretty bad so try not to cringe too much...Also There are a lot of naked figures on this table...sorry about that...I'm working on it!  You know I'm a slow painter...:-) 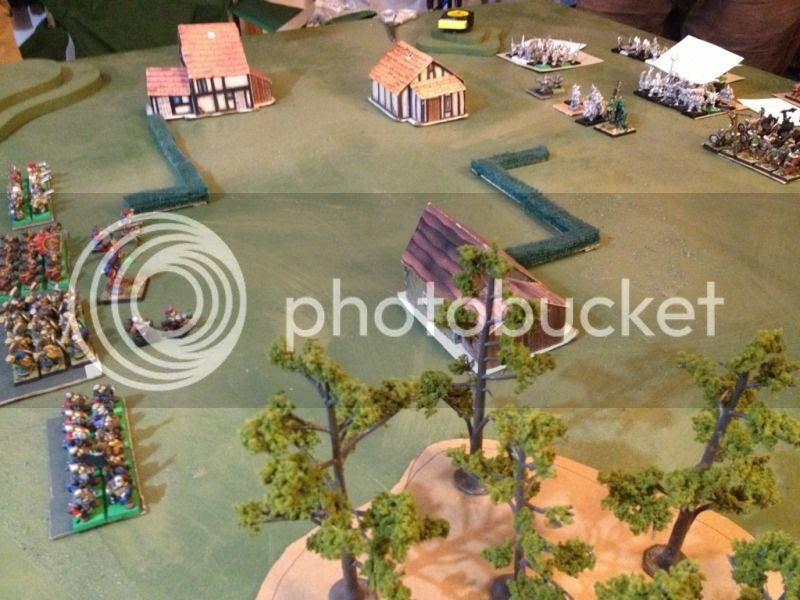 As you can see we have some quality "dish scrubber" hedges in the center....some beat up old Card houses from back in the day scattered about...and a sizable forest on one flank.  Not clear in these pictures are a number of smallish hills mostly around the outside edge of the table.

I failed to take enough pictures or notes to write up a clear battle report but I will try to illustrate what happened in general with the pics I have.

Here we go...Tom and Brian sent the Boar Riders around on their right flank and the wolf rider around their left flank....the infantry headed up the middle with the Goblin warriors, Big Un's and Chaos Dwarf warriors clogging things up in the middle while the Orc Boys headed for the gap between the brown house and the forest.  The evil artillery advanced up the small hills in each corner of their deployment zone in order to get the best vantage point of the field and rain death down on their hated foe.

The Dwarfs carried out a general advance with the Thunderers taking up position behind the hedge and Bugmans squeezing into the space between the brown house and the woods.  The two units of Warriors advanced to hold the center and the Hammerers remained in reserve.  The stunties knew that a good defense was their armies best option against a fast moving foe.

Missile fire for the first few rounds was pretty much ineffective...with only a few casualties caused on both sides.

As the threat to each flank became apparent Alex (Dwarf commander) positioned his hammerer to await the Boar riders and his slayers and swivel gun to receive the Wolfriders.  On a side note the Chaos Dwarf Bazuka team blew itself to smithereens...they only got one shot off...and it missed.


As things progressed the Goblin warriors were pushed to the front of the traffic jam in the center of the table and they took on Ulther's Draagon company...an easy victory for the dwarfs right?!  Wrong!  amazingly the Goblins were able to push back the Dwarfs no less than 3 times!  The Marauder dwarf clansmen to Ulther's right were clobbered by a Mortar round and bolts from the Chaos Dwarf shooty tyes...when they were then charged by the Troll they decided to head off to the local pub for pint....sadly the Troll smahed most of them with his club before they could get service....

The Wolf riders were help up by the Swivel gun crew long enough to get charged in the flank by the Slayers...and the Boar riders got stuck into a slow grinding combat with the Hammerers. In the center Ulther's finally sent the Goblin warriors on their way but were promptly charged by the Big Un's...a much more challenging foe. The Ogre Bodyguard swept in and faced off against the troll...a true clash of the titans!  The Ogre inflicted a lot of wounds and the troll regenerated them...over...and over again  He also puked on the Ogre's shoes...which just made him even more angry!

Bugman's was charged by the Orc boys and fell back before the larger unit.  Things were starting to look a bit rough for the Goodguys. 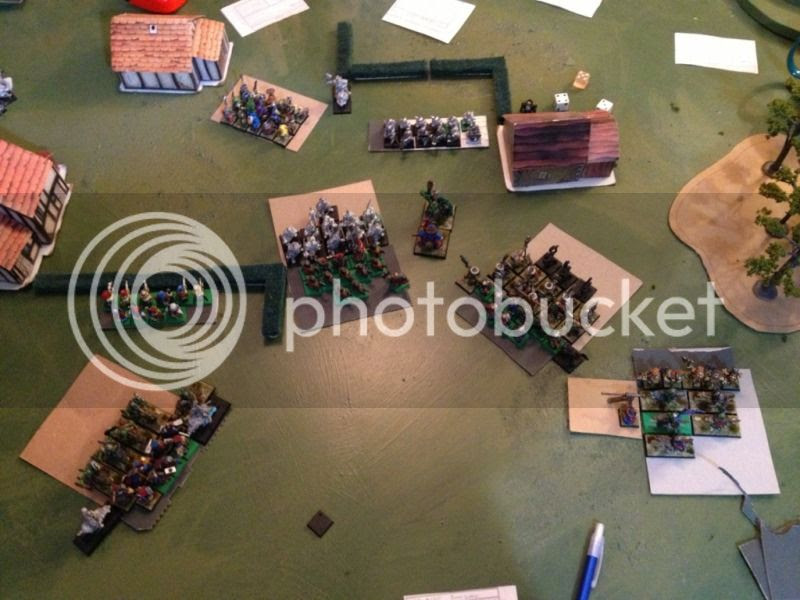 But the Dwarfs gained a brief respite when the Slayers managed to drive the Wolf riders off the table and turned their attentions to flanking the Orc Boys engaged with Bugman's.  The Hammers managed to fight the boar boys to a draw.  And to add injury to insult for the baddies the CD mortar blew itself up as well.  Was the momentum changing? Were the dice finally warming up for the dwarfs?  Of course not you silly fool.... 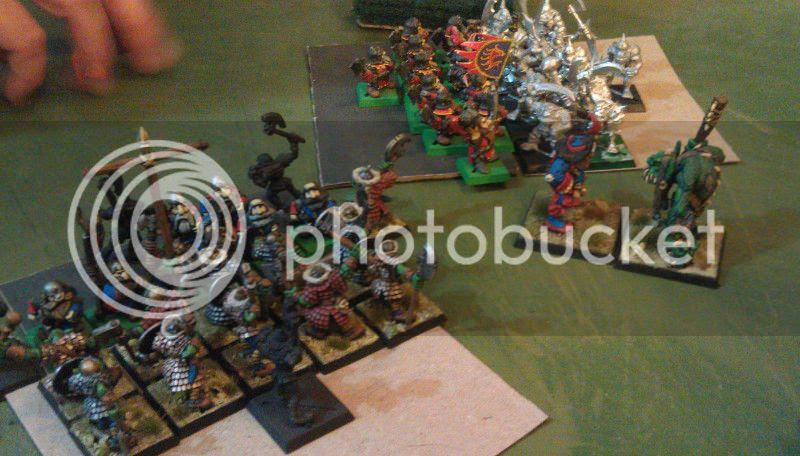 In the next turn the boar riders pushed back...and then broke the hammers....the still engaged Ogre champion was charged by the Orc General and the whole unit of Chaos Dwarf Warriors and Ulther's was slowly getting ground into mincemeat by the Big Un's....sigh

Plus it was getting really late...so Alex "threw in the towel" and ordered the retreat of the surviving Dwarfs.

Victory to the Baddies...but it was a near run thing...if a few die rolls had gone differently the battle could have easily swayed the other way....but it didn't and the evil army won the day.

Most importantly the guys had a great time and all are anxious to do it again...thats the best outcome of all!

Next time I'll take better pics...I promise....off to do some painting...naked figures look terrible on the table top!