I'm continuing to fill time before the kick off of the OWAC in January...

This month that "free time" took an odd turn from what I had been working on...and into a brave new world for me...convert/sculpting with Greenstuff. This is an area of the hobby I've dabbled with but in a very minimal fashion.

But, first...let me back up little.  The reason I became interested in converting some figures is founded in my current interest in the Oathmark rule set.  The world in which Oathmark is set is meant to represent a Dark Age level of technology and therefore the rules do not support Crossbows or any gunpowder weapons.  Bows are the only missile weapon option.

I have lots of painted Crossbow dwarfs for my current army, but I have zero Bow armed dwarfs.  Now, so far I've just used those crossbow dwarfs as Bow armed troops and carried on with the game...and will probably continue to do so...but the visual here has continued to bother me (yes I know..obsessive much?).  I feel I really need to be able to deploy some actual Bow armed dwarfs.

Frustratingly there are very few Citadel or Marauder dwarfs that are armed with bows...and while I've managed to find enough for a small unit I really needed a larger variety to be able to create multiple units.

...so my mind turned toward converting some.  When I began to consider this option I started looking around for appropriately sized and armed figures to base my conversions on.   In this process I came across my stash of 4th edition Imperial Halflings and Lumpin Croops halfling mercs...both of which are armed with bows.  I've always had a fondness for these figures...and have collected a number of both types ...but have never felt the urge to paint them, mostly because they are HUGE for halflings.  I much prefer the scale of the older smaller Marauder halflings and C-series citadel halflings.  These guys tower over those and out weigh them by about 50lbs when you compare them.

...but maybe they would work as dwarfs!

A size comparison with marauder dwarfs show that they are of a size...and in some cases the halflings are actually larger! So the size works.

Stylistically, their goofy bare faces and bare feet were the most obvious concerns. ...also apparently not one single halfling is capable of wearing a shirt sufficient to cover their entire bellies...maybe its a cultural blind spot? Anyway...what ever...its stupid.  And it certainly doesn't work for dwarfs to look so inept...so I'll have to fill those in as well to keep my sanity intact.

Here are pics of my first attempt. 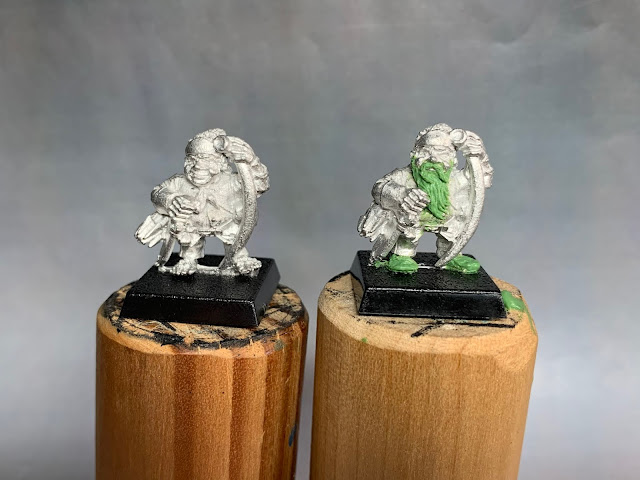 Encouraged by the results, and not daunted by the many flaws I saw in this example, I persisted and worked through an entire unit of 15 rangers including command. 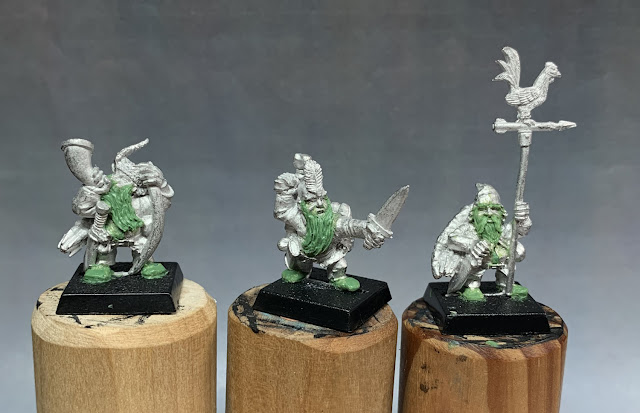 Here are the converted trooper models shown with an unmodified version of each figure. 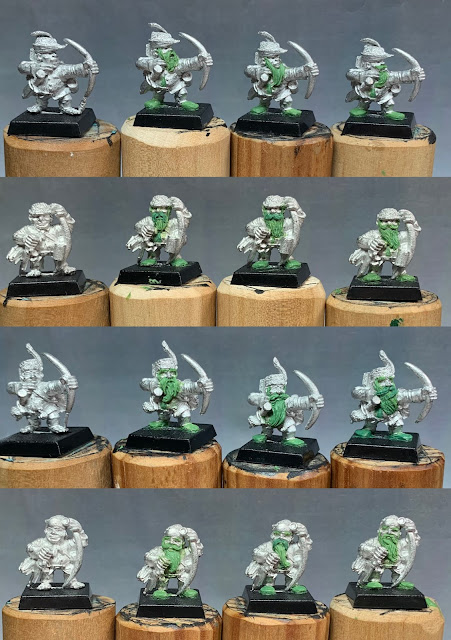 When I shared these "greens" on fb as I worked on them...it was pointed out that the banner pole topper didn't really work with the dwarfs and that it should be replaced with something like a stag.  I quickly raided the bits stash and converted the banner pole... 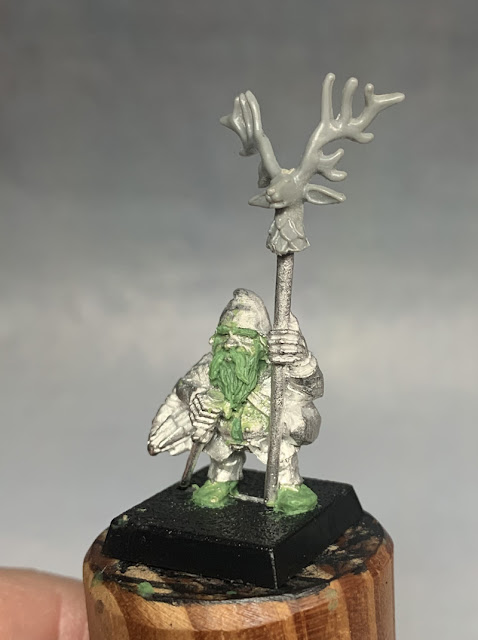 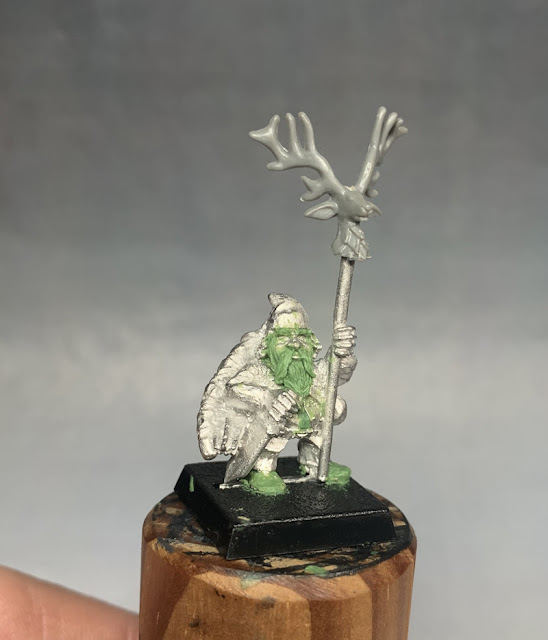 Anxious to see how they looked painted I picked one of my favorites and got down to priming and painting him.  With this guys jaunty cap and feather he is certainly throwing off some Robin Hood vibes...so I combined that with the Roger's Rangers inspiration I was getting off of other members of the unit...and opted for very earthy colors. 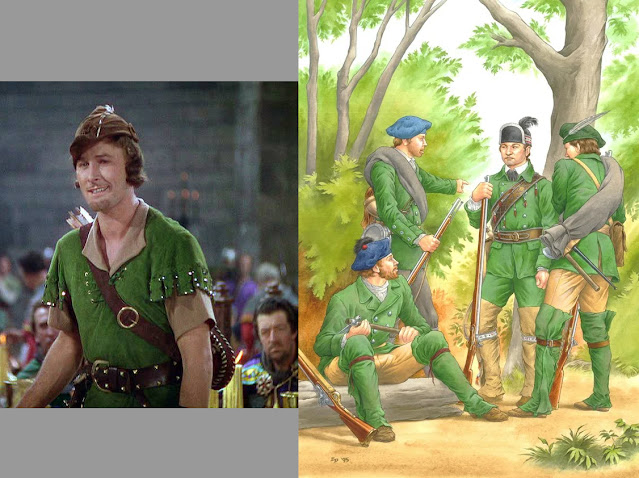 This is a massive shift from the rest of the army and its Red and Blue color scheme....but a pallet much more fitting for Rangers.

Here is the completed model! 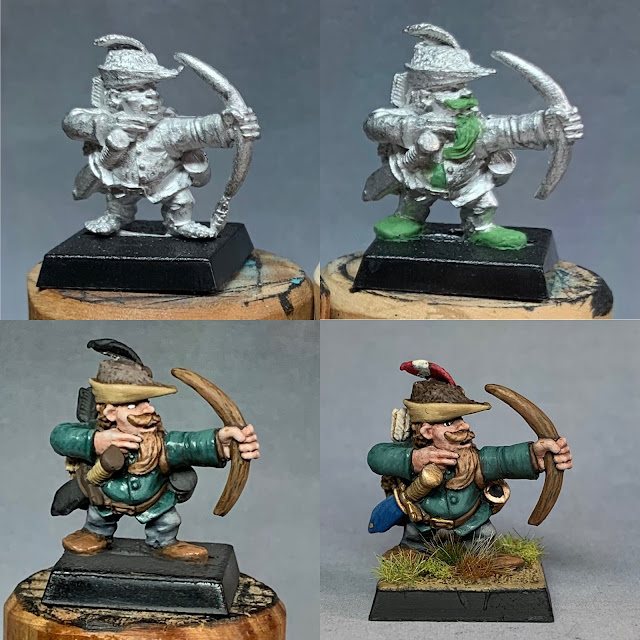 I found this excursion into converting an entire unit of figures to be a lot of fun...and I will probably press on and work to convert some of the Imperial halflings as well.  Working with Greenstuff is still a very much a learning process... but one that I enjoyed and look forward to continuing.  I might need some proper tools though...this was all done with a tooth pick! 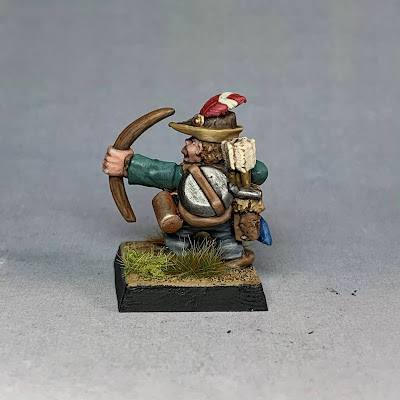 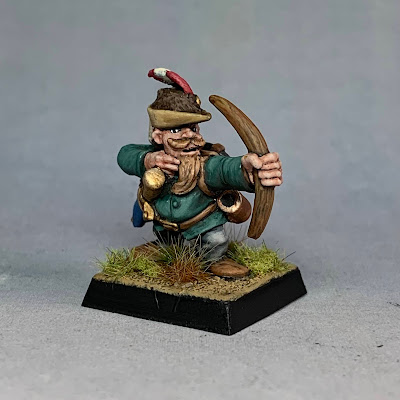 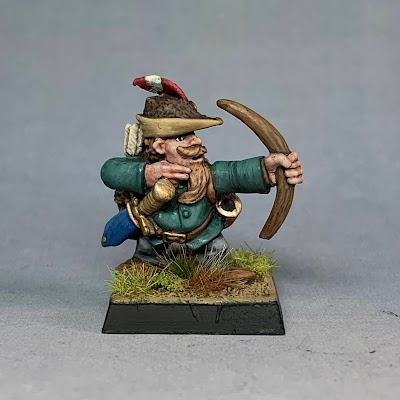 I do realize that these are not everyone "cup of tea"...I got a lot of push back from people upset that I had defaced such precious sculpts.  If you feel that way...well..frankly...they have just been sitting in a box for years now...and if converting them means I'm going to paint them and get them on the table for a game...then I have NO issue with converting these halflings. ...plus they're my figures...you play with yours the way You want and leave me to mine...