I managed to get a fair amount done on my batch of spearmen over the last two days.  I finished highlighting all the cloth areas (though I may add one more layer to the blue..) I highlighted up the padded armor and then gave it a good wash with a mix of Gryphone Sepia and ancient Chestnut ink...gives it a nice reddish brown look.  Then went back and picked out all the studs in the armor with a spot of black followed by some bolt gun metal.  I also highlighted the blades and armor with Mithril Silver and then washed these areas with a slightly diluted Badab Black wash (approx 75% strength).  Lastly I got the first highlight on the leather areas.  They aren't done yet but they are starting to come together. 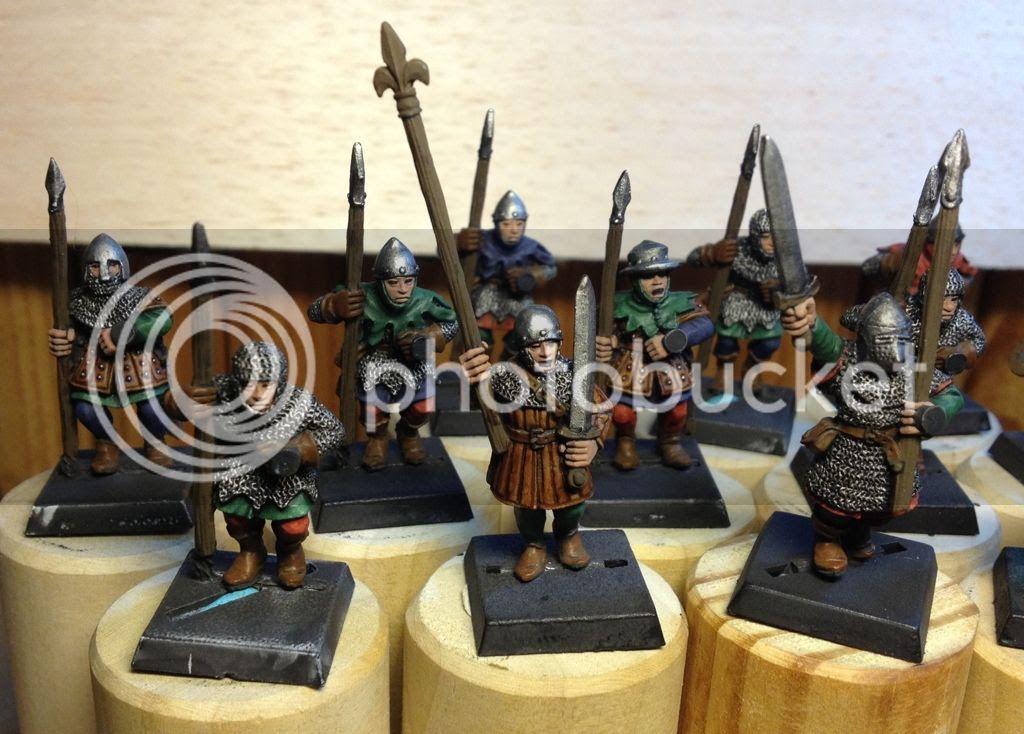 ...so just the brown areas to highlight...and then the faces and fiddly bits....oh yeah...and shields!  I haven't really thought about the shields! shit!

The seventh edition of the Lead Painters League was announced on the Lead Adventure Forum this week... I greeted the announcement with mixed feelings.

First of all the downside....the timing couldn't be much worse for me...I'm right in the middle of painting this unit and have to finish it before I can start on any more teams for the LPL.  Also, the late start this year means that the contest will stretch into June!  As a working archaeologist my summers are extremely busy and I'm often on the road and away from my painting desk. Then there are all the late nights and stress of trying to get a team done EVERY week...for 10 weeks... I dunno...its a tough call...

On the other hand...competing in the LPL pushes my hobby to new levels...both in the speed it insists on...and in developing my photography and terrain making skills (both of which need work!).  There is also a very collegial atmosphere to the League that is really fun to be a part of.  Plus at the end of it you have a lot of painted figures...which is the point of the whole thing right?!  I have no illusions of winning this contest...the skill level displayed by the top-tier challengers is out of this world!  Its more like a marathon...you know the Kenyan is going to win...but you have to compete and finish...just cuz!

So...yeah...I'm going to do it....you know I will...  I actually have three teams mostly painted and one complete and even photogrpahed.  that puts me in a better starting position than I've ever been before....and I still have the week and a half after I turn in my Bugman's unit and before the end of the LPL submission deadline to get more teams in the bag....I hope.  If I could have 5 teams painted and 3 photographed before the contest actually starts I would be feeling pretty good about my chances of having a new team each round.

The special themed rounds this year are fairly straight forward.  The first round theme is to depict a command element of some sort....I already have this one taken care of.  Round 5's theme is "Historic Civil War"....this is the one round that I will need to buy figures to paint...and I have some real jems in mind...in fact I've been looking for an excuse to buy/paint these guys since I saw the greens for them on LAF.  Round 10's theme is Sci Fi....this will see me dipping into my extremely small collection of RT era minis...we will have to see what pops out?!