Chaos...the BIG and the small Part 5

Well its only been 6 months since my last update on the Chaos project that I've been working on...so lets get to it!

To remind everyone what I'm talking about...I've been working on a 12 figure commission for a mate from CDO (HlH) who wanted me to paint some of his classic Chaos warriors to match his already painted MM90 Chaos Dwarfs....the sculpts of which were inspired by the corresponding warriors.

So this post brings this project to a close...it took much longer than I expected to complete these and I must applaud HlH for his patience with me while I finished these off for him...he has been very gracious.

First up we have this guy who is wearing the skin of some sort of saber toothed cat over his Chaos Armor...here we see him with the corresponding MM90.  Keep in mind the HlH will be taking care of the bases and shields so that they match his existing figures. 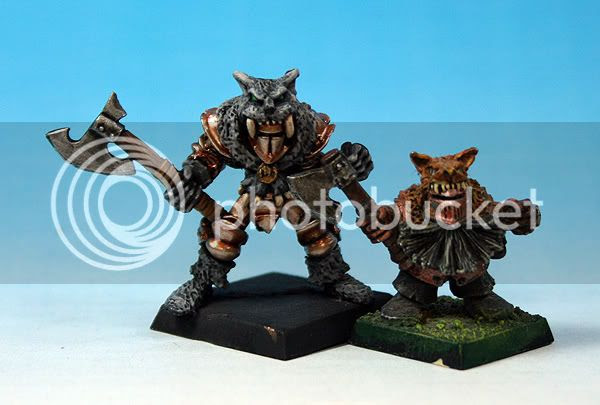 As you can see I mixed things up just a little....instead of painting the pelt tan like on the MM90 I chose to use the grey of the dwarfs beard for the Warrior pelt....I felt this contrasted with the Bronze armor a bit better.

Here are the detailed shots of the Warrior...

Next up are my favorite pair of this group....the Skull Face boys.  I love both the MM90 and the Chaos warrior versions of this sculpt.  The fact that the warrior version is an uncataloged release just makes it more interesting...it took me quite awhile to get ahold of a copy of this one for my own collection.  I was not even aware that he existed until HlH mailed me his copy to paint.

Paint job wise this one is fairly faithful copy of the MM90 supplied. 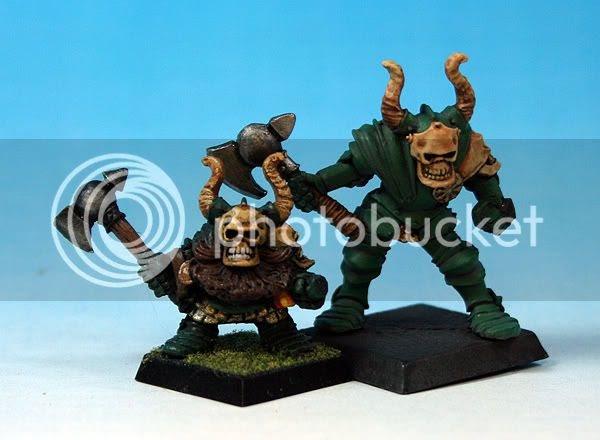 Here is the individual shot of the Chaos Warrior.

Alrighty then....that brings us to the final figure....the Mage!  I must say that this one intimidated me the most...for a couple of reasons.  First of all the two sculpts, while similiar, have more differences than the previous pairs.  Secondly the MM90 Mage is by far the coolest dfigure in that range...and that is saying something!  And lastly HlH's PJ on the MM90 version had a lot of bright color that I feared trying to duplicate.  But as my Dad used to say "there ain't nothin' to it but to do it!" So...in this case I tried to stick with the same color pallete to get a similiar feel... but did not try to slavishly follow the mini-me version.  Here they are side by side. 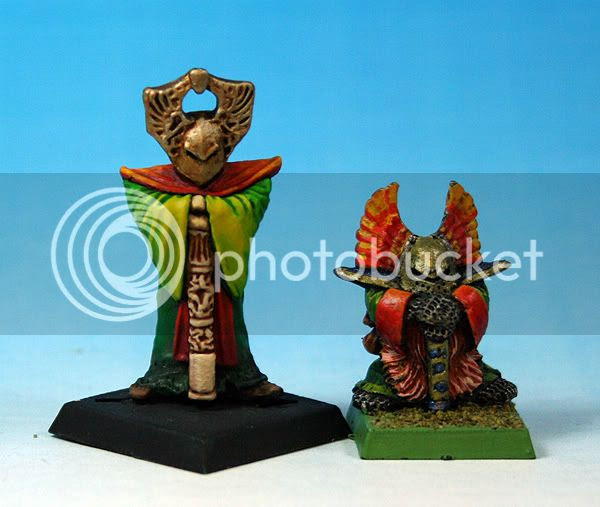 And here is the Chaos Wizard (Amon Dul) Solo... 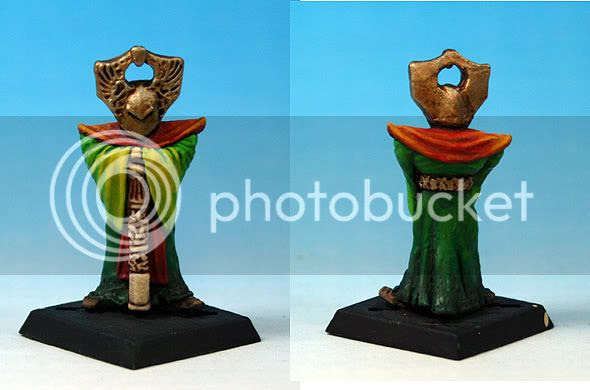 And just for fun...here are all 12 of the comission pieces together in one group.

This has been a fun project...and these were hard to package up and send away...but they are gone now and I can get on with trying to collect my own copies of them....hehehe.