I am forced to pause just before finishing my modular terrain boards due to lack of appropriate working space.  For the water feature pour I need to have stable warmish temperatures for at least a day or two...I also need sufficient ventilation so I don't poison myself and/or my family.  So factoring in those concerns the best place to do that work is in my garage...but it is too cold out there right now.  We are expected to be up in the mid sixties next week...so I'll try to knock that out then.

But...While I've been waiting for the proper conditions needed to finish my boards, I've been keeping myself busy with making some buildings to use on the table when it is finished.

...now I hadn't intended to make my own buildings...the last thing I need is another distraction from the hundreds of minis I should be painting...but circumstances conspired against me and I took the plunge.  First of all I shopped around for Resin pieces...I certainly appreciate the Table Top World buildings that everyone seems to be in love with at the moment.  But, when I saw some in person it seemed to be slightly under-scaled to my eye.  They seem much more 25mm...than heroic 28mm....at least the normal buildings...which are the ones I could easily afford and wanted most...  So I passed on those and field to find alternatives that really excited me.

That convinced me that I would need to have buildings made by a professional...so I started to research terrain builders...and sold some figures to fund the expense.  I decided to contact two different builders to see if they could help me within my budget.  In both cases contact was established...basics were discussed...and prices decided...and then...

I was ghosted by BOTH of them!


...so that soured the prospect of have buildings made for me...and left me with making my own.

Back in the day I was perfectly happy to play using some of the card buildings from the Citadel Townscape book....a real treasure trove of buildings for the cash strapped 14 year old. 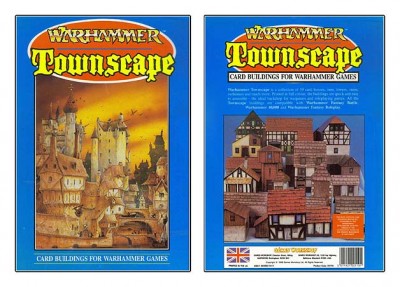 I've actually used some of those same buildings over the last 4-5 years since I got back into gaming. 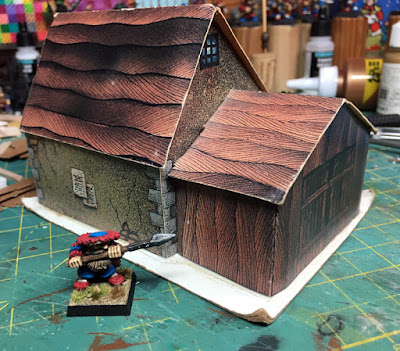 But with the completion of the terrain board nearing, I really wanted some buildings of similiar quality to put on it....but...I also still wanted that "Oldhammer Feel(tm)" that you get from the Townscape buildings.


So that led me to making my own buildings using the Townscape pages as templates.

With this goal in mind, I procured a .pdf of the Townscape book 😉...and printed out the pages that held the pieces of several buildings that I wanted to build.  These I attached 1/4in foamcore using spray adhesive. 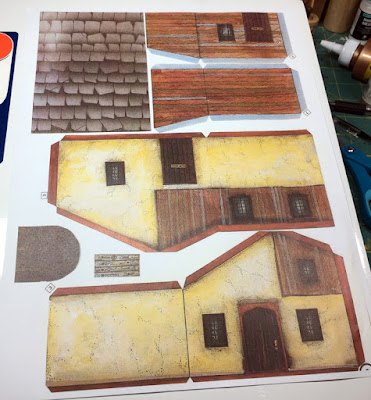 I then cut out each of the "panels" of the building using a metal ruler and a sharp blade (I prefer clickable, break off, box cutter type knives to Exactos for this)...I found the best way to get a clean cut was to use a wicked sharp knife and at least 3 passes to make a cut.  Don't try to cut the whole thing in one go. 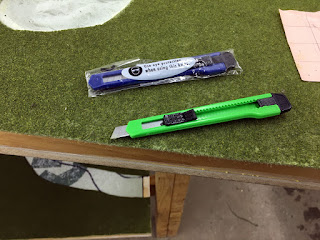 With the pieces cut out it was time to assemble the sides of the house and mount it to a base.  Being the impetuous type...and not really having all the best supplies I could want on hand...I chose to mount my building on thick card stock (mdf or plasticard are probably better options...).  I scavenged this stuff from some posters we got at work...we must have had 500 or so printed and there was one of these between each hundred.  Its beautiful flat thick card.  But it is card...and I have concerns about warping....

I assembled the sides and mounted them to the card base using thick PVA...actually that wonderful North American crafting staple: Aleene's Tacky Glue. 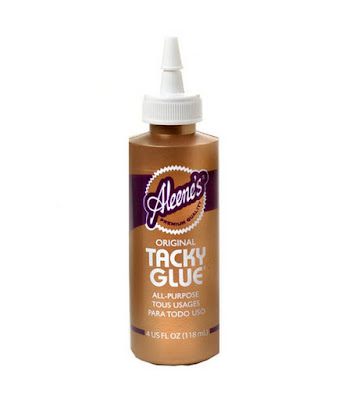 This stuff is thick...which is good for tacking quickly, and holding the pieces together almost immediately...and once dry it is quite strong and yet, not brittle.

It was here that it occurred to me that the Townscape templates were designed to be made with card...not foamcore.  This led to the dimensions of the cottage "growing" by 1/2" (two times the thickness of the foamcore) in one direction (length in this case).  While this left some gaps in the template coverage and altered proportions a bit.  I was unbothered by the matter and carried on (it was not until later experiments that I realized what a big difference change in proportions could make) For the Half timber cottage here I didn't mind a bit of extra size.

With the boxes of the building built I moved onto adding the timber framing.  For this I used a balsa that was about 3/8" wide and an 1/8" thick...which I split down the middle and trimmed to length as needed.  The Aleene's was great for this task too..a very thin, even spread of glue on the back of the timber and it stuck right in place.  This seemed a tedious task at first but I found that I really enjoyed it as I progressed...this really brought the model into the third dimension. 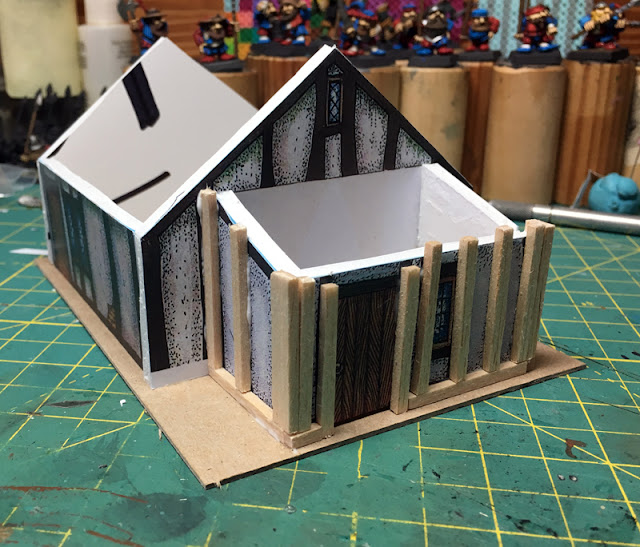 After the timbers were in place I moved on to the roof.  First some more of the card I used for the base was cut to fit (with 5mm overhangs) and glued down onto the foamcore box as the base of the roofing.  Now it was really starting to look like something. 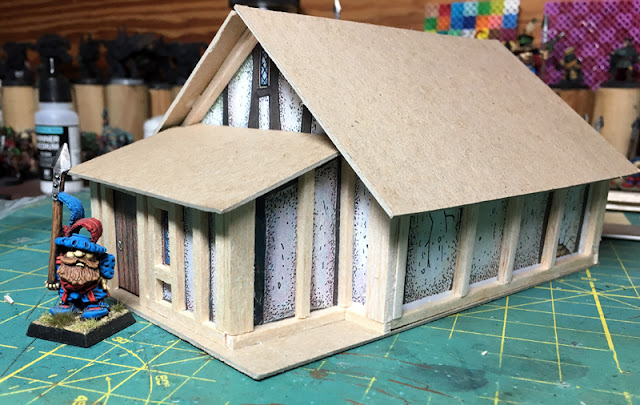 For shingles I used strips of slightly thinner card (from a pizza box)...this was cut into strips about 1.5cm wide and as long as the first roof panel plus a couple of mm.  Each of these strips was then marked at approx 1cm intervals that designated the width of each shingle.  That may seem too wide at first but it will get trimmed.

Using a small pair of sharp scissors I made curved V-cuts at each of the 1cm marks that extended about 3/4s of the way through the card strip.  This left me with a perfect string of shingles.  To give them some more character I then went back in and clipped corners...put in cracks...cut off some shingles at odd angles...left some perfect...basically messed them up...but not too much! 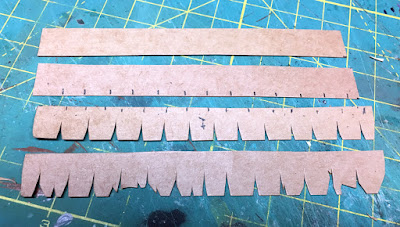 Once I was happy with the amount of "character" I had given a strip of shingles...it was glued onto the roof baseboard...starting at the bottom on either side and working toward the peak.  Each strip over-lapping the previous one by about 1/4.  Also for each strip you want to shift the shingles by a 1/2 width to avoid creating continuous seams in your roof (you don't want any water to get in do you!?) 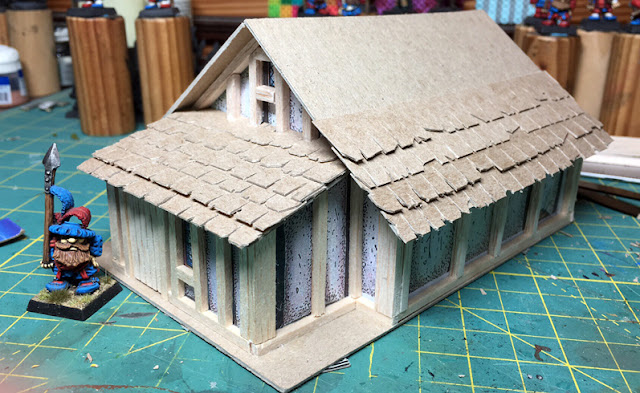 This seems like very tedious work...but I got pretty fast at it and the addition of characterful tiles to the roof really brings the model to the next level...so it is worth the effort.

At the peak of the main roof I cut a double wide piece of card (3cm wide) which I scored down the middle and folded.  Then I carved shingles out of both sides using the procedure described above and glued this down to complete the roof build. 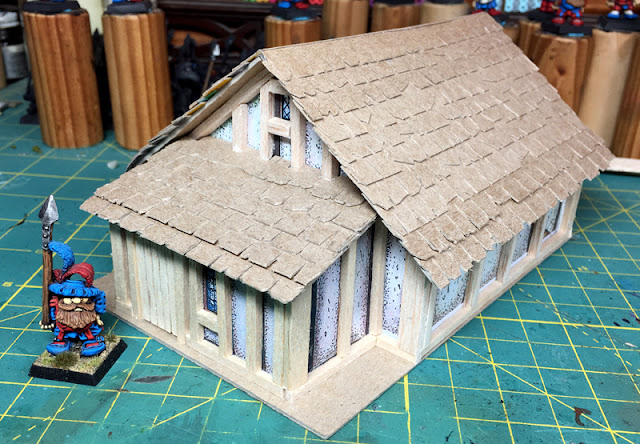 Next I turned to giving the structure some doors...in this case two of them.  For these I used a a piece of Balsa plank that was cut to fit the opening.  I then used a sharp mechanical pencil to score several lines into the balsa to give the impression of individual planks.  To this I added a small blob of Green Stuff with a copper wire loop embedded in it...making a simple but effective door handle. 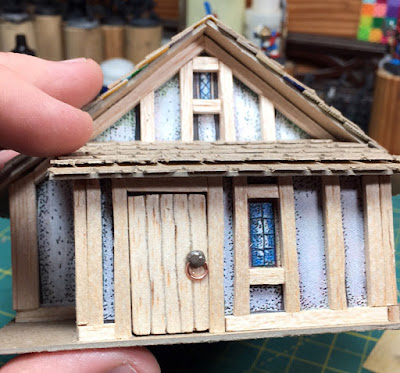 And that's were I left this one and moved onto the next. 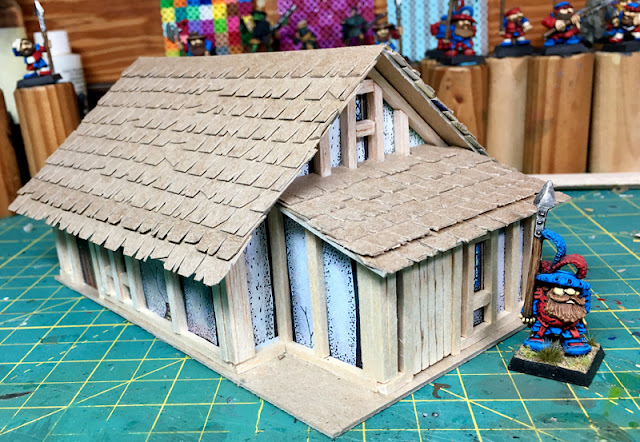 There are still a number of details to finish up on this before I consider painting it.  I should really add a chimney of some sort....and I need to texture the plaster parts of the sides (between the timber frames)...and I need to figure out how to do the windows...

Anyway...I really enjoyed making this building and found it very satisfying to produce such a good looking building with my own meager skills and supplies.  In fact I enjoyed it so much that I immediately dove into my second build...

PS. I must acknowledge the tremendous support and advice provided by Matt S. ...he has been like a coach thru this process and his advice has proven extremely helpful and encouraging.  Thanks Matt!
Posted by Blue in VT at 8:10 PM