As most of you probably know I have spent the past six months painting frantically for the second Old World Army Challenge.  It was, once again, a grueling effort but I did manage to finish and add a significant new contingent to my Puff and Slash Dwarf Army...which is my oldest army and one of the largest.

As I was finishing the challenge and and preparing to take some shots of the entire 1000 point force that I had managed to paint...I thought it would also be a good idea to combine them with all my other Empire Dwarf figures to show the current status of the entire army.

This proved to be a lot of fun and, though the set up and prep work took some time I think it was worth the effort.  Now this army is NOT complete...several of the units will be further expanded....several have a few partially painted figures....almost all units are still lacking banners...and there is one entire unit not represented at all in these pics.  Despite these deficiencies I find this kind of photography to be very inspiring and feel that it really gives me a feel for where the army as going as well as indicating what needs to be finished up.

For this photo shoot I used two of my modular terrain tiles and a number of the houses and walls that I scratch built in the last two years...as well as a portion of the Might Fortress.  I'm still having trouble with the backdrop situation, but for the time being I used a sheet of green foam board as my backdrop...less than ideal but sufficient for now.

Here is the Dwarf line of battle for the Grand Army of Salsburg.

And the Army from Above!

An Impressive looking force if I do say so myself!

As with many dwarf forces of any size...the main battle line is proceeded by a swarm of disgraced dwarfs in the form of slayers....surging forward in a frenzy to attempt to redeem their honor through a glorious death.

From the painting I accomplished for the OWAC I was able to add an entire second Pike Block to my force.  This once composed of some the excellent White Knight sculpts that are currently sold by TAG miniatures.  These ones all have sallet helmets and many have breastplates so I will run them as having heavy armor...they are also slightly larger than their Marauder Pike cousins next to them so I have also been toying with the idea of using them as Clansmen (+1 shock elite) to give them a little more hitting power.

These pike blocks are protected on the flanks by two Swivel guns...the classic Marauder one on the right and a White Knight one inspired by it on the left.

In front of the Pike Blocks we can see the grizzled dwarf general  and the Army standard bearer (this is one model that I plan to replace soon). 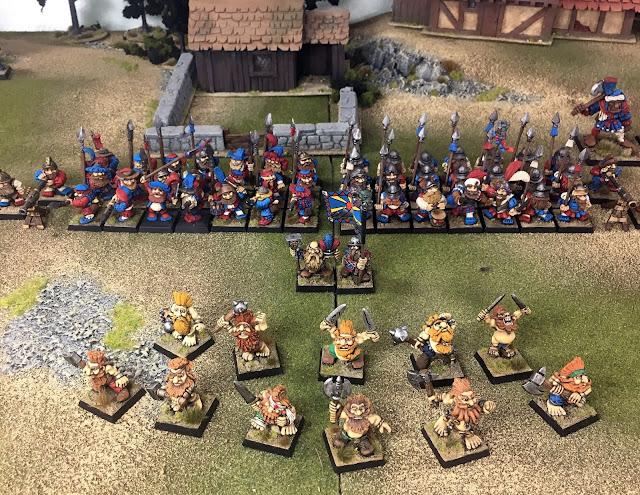 The right flank of the army is supported by a unit of Crossbow Dwarfs (soon to be expanded to 14) and two three man cannon.

The crossbows and the cannon on the left are further products of the OWAC.  I really like the figures of this unit which is entirely composed of Marauder figures and has great variety and characterful sculpts.  This is a unit drawn from the country side around Salsburg and their style of dress is not quite as ornate as the city troops.

In front of the missile troops on the right flank are the Zweihanders...the OWAC has allowed me the opportunity to bring this unit up to its full strength of 14.  While 12 of these figures have been painted for a while (all White Knight sculpts) I've added the fantastic MM15 Marauder Zweihander and one from the Runecast line of sculpts, which are sadly hard to find these days.

This unit is a real power house in this army as I run these figures as Hammers (+4 shock elite) with heavy armor. 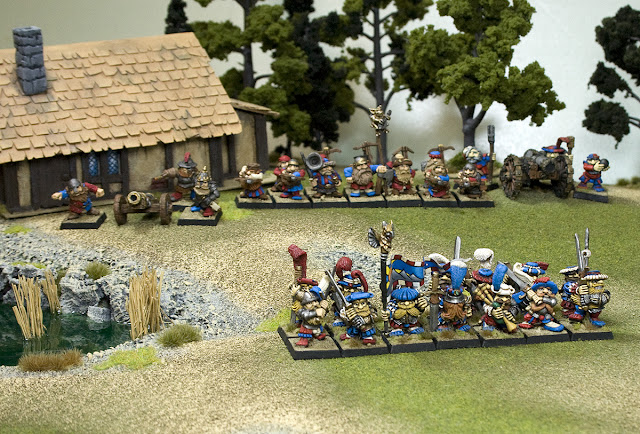 The left flank of the army is further supported with missile weapons in the form of a unit of thunderers and another unit of crossbows...this time in the fancier puff and slash style that marks them as a unit of the city guard.  Both of these units are made entirely of Marauder figures...as are the five Ogres standing behind them that give the left flank its muscle. 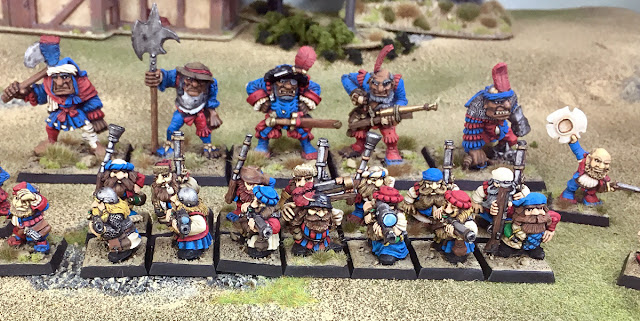 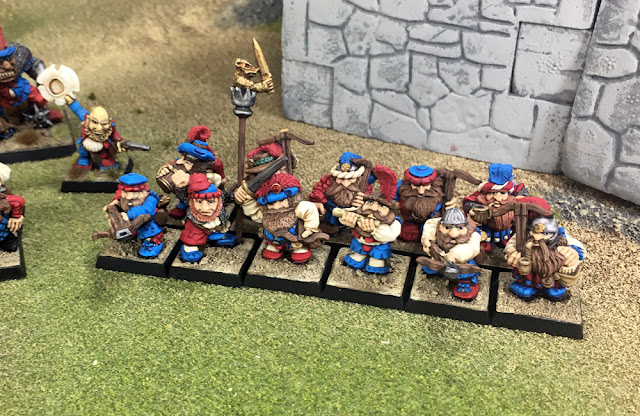 Both of these missile units will be further expanded...the crossbows to 14 and the hand-gunners to at least 18...and possibly into two separate units. I also have two more of the spectacular puff and slash Ogres to add to the force.


The other infantry unit that will be added is another unit of heavy infantry....this one made up mostly of Marauder Hammerer figures...though I will be using them as Iron Breakers (+3 shock elite).  Eventually I will add a cavalry wing consisting of one unit of Light Cav mounted on ponies...and one unit of Heavy Cav mounted on barded ponies!!!  I'm very excited about that.

I would call this force about 80% complete...but it is already looking quite spectacular and I'm very excited to push this through to conclusion.  The puff and slash style dwarfs have always been a favorite of mine and its fair to say that I started painting this force in the late 1980's early 1990's...so it is an army 30 years in the making.

Moving forward I will do individual posts on each of the units in the army a discuss more about the figures that make up the unit and start to flash out the fluff for the army.