A Return to the Dark side...

Hello All!  sorry for the long time between posts...RL has caught up with me in a large way this summer and painting time has been hard to come by...add to this the general painting exhaustion I've been suffering after the wrap up of the LPL and...lets just say...I haven't gotten any painting done for the better part of a month.

But...when you are in your darkest hours it is often your friends that come through in a pinch.  In this case my good friend Clam came along to get me inspired.  Clam is one of those rare internet friends that you have an immediate connection with...even though they live thousands of miles away and speak another language most of the time.  Clam is always up to something interesting and has wonderful taste in miniatures.  We met over on CDO a couple of years ago and have traded many dozens of PMs since then...None more exciting than one I received about a year ago now.  Clam clued me in to a little project that he was working on with John Pickford to create some new Evil Dwarf figures that would compliment the classic 2nd and 3rd edition Chaos Dwarfs produced by Citadel and Marauder.

The idea sounded like a pipe dream at first...but through Clam's dogged determoination and John Pickford's immese skill this dream has just recently become a reality.  About a month ago Clam let me know that the first Mastercasts of his new babies had been produced and he wondered if I might paint up a few...I of course jumped at the chance to see these top secret babies in person and readily agreed.

A couple of weeks ago a small package arrived from Denmark...where Clam resides...containing 4 bodies, 8 weapons and 10 heads (plus a few other tidbits I'll mention another time).  As my wife can attest...when I got the package after work I immediately retreated to my man cave and she didnt see me until the next morning.  I fiddled with all the heads and body combos...I tried different weapons on each sculpt and generally had a good time.  And within less than 24 hours I had my four Ewal Dvergar built and ready to be primed.

Here they are in their "raw" form 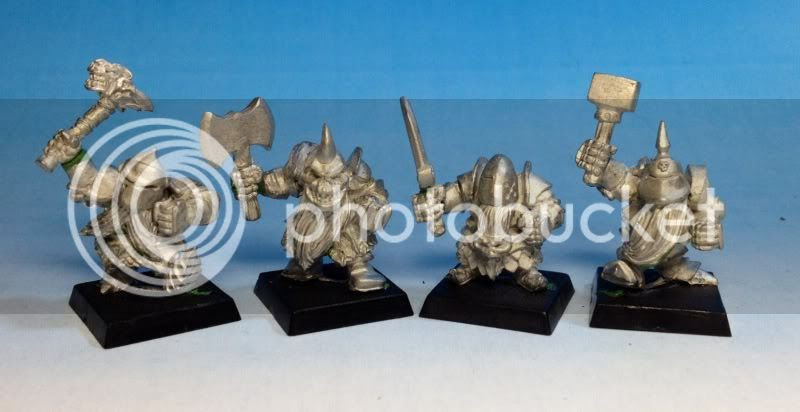 The sculpts are gorgeous and the quality of the casting is fantastic...I had very little in the way of flash or mold lines to remove.  You may spot a couple of bits of greenstuff in this picture...that is there mostly from my botched attempts at pinning the weapon hands to the arms...I apparently need more practice at this task.

Next came the ever delicate task of deciding on a color scheme for each figure.  If you have seen any of my previous posts about Chaos Dwarfs you will know that I'm a fan of the bright colored armor favored in the 3rd edition for my chaos figures.  I've employed this technique on a fair number of Citadel and Marauder MM90s over the years...so I wanted to make sure I didn't duplicate any colors that I had used previously...you can't have your Chaos troops looking too uniform right?! :)

For the guy on the left I was shooting for a Blue-Grey armor color...but as occasionally happens with these things...once I started highlighting the color took a slightly different course than I had originally intended...thankfully it was a course that I'm quite pleased with...to me he looks a lot like a Storm Trooper from Star Wars...except shorter of course...and hairier...:)  The Yellow Beard brings a bit of color and contrast to the finished product.

The Deamon faced hammer this guy is swinging is one of the better weapon options for these figures...its a great detail that really adds some interest to the sculpt as a whole.

The next one from the left...Mr. Skull face... I really liked right off the bat...I knew the skull was going to be a great focal point for the figure so I choose my signature blue color for his armor as a good contrast to the bone.  As his armor and helmet were so prominent I chose a fairly subdued brown for his beard.

The third figure is the least dynamic pose of the four bodies but makes a perfect base for a rank and file trooper...I really liked the "egg" shaped helmet and though the curved sword he is holding seemed an odd choice it just felt right with this guy and I'm pleased with the result.  Colorwise I went with a more subdued brown.  I had great success with a tan MM90 awhile ago and wanted something similar but with a darker brown color...I was concerned that the gold scale mail would get lost in the brown but after highlighting and washing it I think it contrasts nicely with the plate armor.

Lastly is my favorite of the bunch...the guy with the spiked Helmet.  This figure reminded me of WWI German helmets...which made me think of military colors...which made me think of OD green...which reminded me that Clam has an affinity for green armor...which led me to this color scheme.  Since the Green is fairly subduded I opted for a bright red beard and it really made the figure pop nicely.

All-in-all these are just lovely, character-filled figures.  My only complaint is that I didn't have more bodies to use!!  There are plenty more excellent heads to choose from in this range and I'm itching to give them a go as well.

These figures will be getting shields...they are on the painting table now...I'll be sure to post pictures when they are completed.

Here they are ranked up... 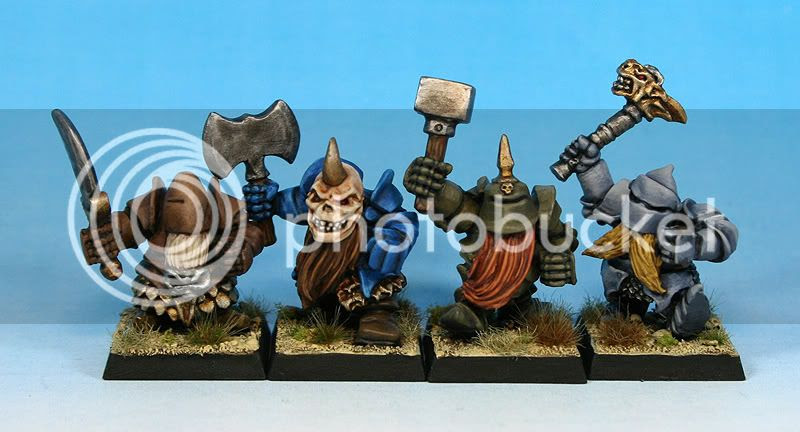 And here they are ranked up with some of my classic Marauder MM90s...I think they are a perfect fit in both size and style.

So if you are now wondering..." How do I get my hands on some of these beauties?"  Well the answer is simple...check out Clam's Blog here: http://claminiatures.blogspot.com/  Right now supplies are limited to the extra master casts that he has but there is hope that these will reach production casting sometime in the near future.  Further discussions with Clam have suggested that this may not be all the sculpts we see from this range either...but I leave that news to the man himself....:)