Howdy all!  Sorry for the long delay between posts.  The summer is always hectic in my world and the last couple of months have been proof of this fact.  That said I have managed to complete a few painting and modeling tasks.

One of my favorite Fora on the web is Chaos Dwarfs Online (CDO) where I have been a member for over a year.  The CDO hosts one of the best painting/conversion contests that I am aware of...its called the Golden Hat.  I have competed in several of the contests up to this point but the level of skill exhibited by the members there is unbelievable...not just the painting...but the conversions in particular.  However, the subject of the last Golden Hat XV was a simple Chaos Dwarf Warrior...something that I felt I could achieve with my minimal Green stuff skills.

So I looked to my bits box and came up with a plan.

Some time ago I purchased a large lot of Marauder MM90s Chaos Dwarf figures off of a forum and included in this batch are several that I strongly suspect are recasts.  They exhibit less than crisp detail, deformed weapons, and odd tabs...but I got them at a great price and they were duplicates of figures that I have original copies off so I saved them for times like this.

I started with a recst copy of this figure: 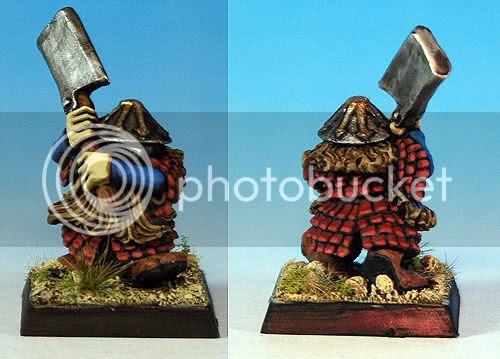 I went after him with a vengence and took off his cleaver blade, his head and helmet and his beard.  After much elbow grease and lots of sawing this is what I had left 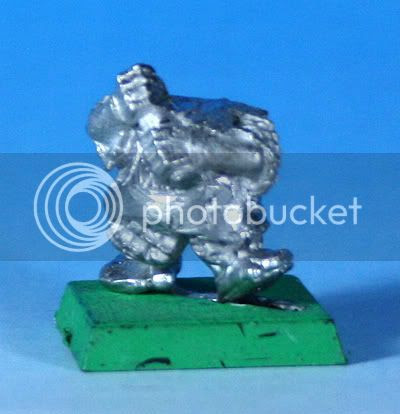 And here are the bits that I chose to use to remake my warrior.  You can see his deformed cleaver on the left, In the middle is an extra sallet helmet (with beard removed) that I had from White Knights recent dwarf releases and a two handed sword blade from a broken 3rd edition Citadel Chaos dwarf sculpt.

I started my rebuild by pinning the sword blade onto my models hands and the helmet onto the shoulders.  I used Green stuff to fill in numerous gaps in these areas then started on the beard.  I choose to give my figure a coiled beard for a couple of reasons.  1st I wanted it to look different than the beard that I had just removed...and 2nd it was easier to sculpt..:).  I reffered to a number of great tutorials on CDO and went to town.

When the "construction" was complete I set about to painting.  I've been working on my MM90 unit for about 9 months now and each dwarf has a unique color scheme...like the ones shown in the catalog image I remember from my youth.  So...as I saw this figure joining that unit I wanted a bold color scheme for him too....I settled on Green.....here is the finish product. 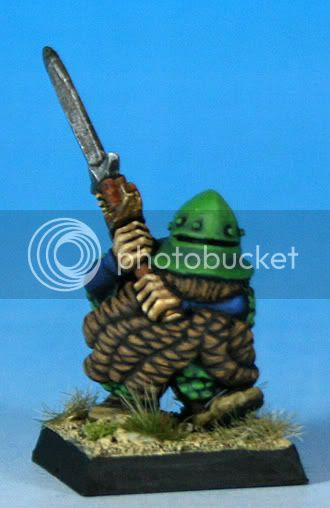 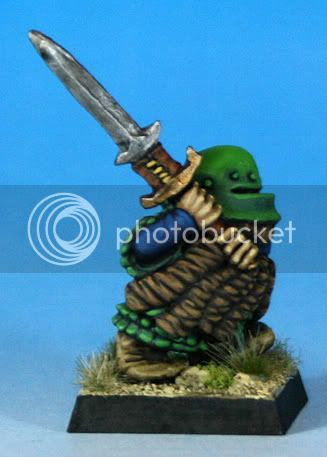 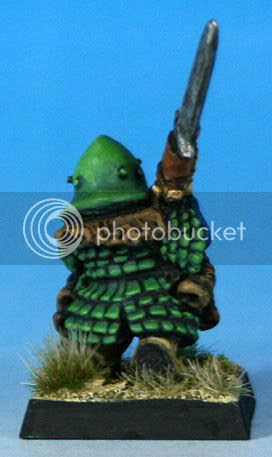 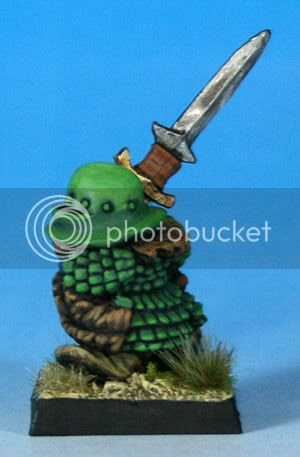 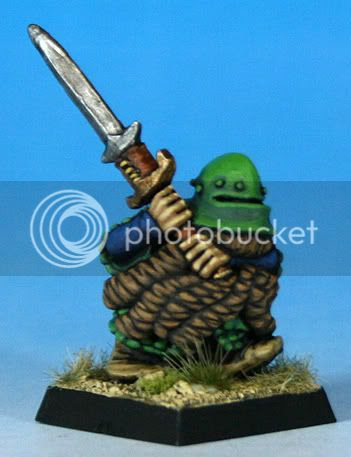 My compatriots over at CDO were gracious enough to award me a Bronze metal for my effort.  I hope you like it too.
Posted by Blue in VT at 11:25 AM