Well...after enjoying painting that MM15 Dwarf with the Pike for the Paint it Forward event...I've felt the strong urge to build and complete my Dwarf pike blocks.

The Marauder Pike Dwarfs were, and are, some of my all time favorite figures from the Golden Era.  They are the figures that hooked me as a child and continue to do so today.  Though they have been long discarded by modern Warhammer Bullshit fluff they will always hold a holy place in my Oldhammer dwarf army.

After completing the MM15 I pulled out my current pike unit...a 15 strong force that is mostly sporting paint jobs dating to the Regan administration.  To these I added another 13 unpainted pike dwarfs and this is the resulting unit. 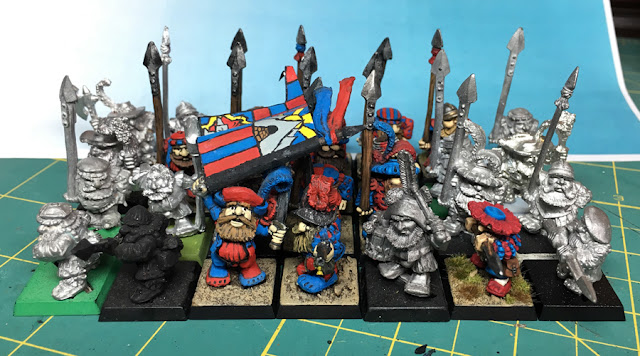 28 seems like the right size for a true pike block!!!  No one likes a puny pike Block!  Four ranks of seven will provide a formidable force on the field and act as a major deterrent  to any mounted troops looking for easy infantry to pick off.

I'll be using my painted MM15 and some of the modular Marauder dwarfs for the front rank...in addition to the command section of course.  I've also chosen to switch out the dwarf fife player that originally came with this unit for the MM15 drummer...who is one of the greatest Marauder sculpts ever...period.  In hopes of diversifying the unit as much as possible I will also be converting a couple of crew members from the Marauder Siege gun into pikemen and adding the wounded MM15 dwarf (to stand under the banner in the second rank, as well as the MM15 with the Halberd to act as the sergeant in the back left rank.

My real question for this unit is what to do with the old Paint jobs...?  The painting isn't bad...but it is not up to my current standards...but it is done....its a tough call.  I think I will attempt to "freshen" up the paint jobs on the rank and file guys with some washes and highlighting...particularly for those in the back ranks.  For the Commander and the standard bearer that will be front and center....I will probably strip those and start from scratch.  I will however preserve the banner to use as a guide for its replacement.

So...time to get these guys primed and on the table!  I feel some batch painting coming on!!!

Not being satisfied with having one pike block....I've decided to add a second to my army....this one composed of White Knight Dwarf pikemen (now owned by TAG miniatures).  I've painted a few of these back in the day...and while they fit very well with the marauder pikes...they are slightly larger than their marauder cousins....therefore I've decided that they need to be in a unit of their own.

I'll run these as the elite pike block with slightly heavier armor....to represent this I've picked mostly helmeted heads for these troops.  This did require stealing some helmeted heads from a variety of WK troop types including some of his mounted light cavalry troopers.  All in all I think this will be an impressive and HARD hitting regiment when it is complete. 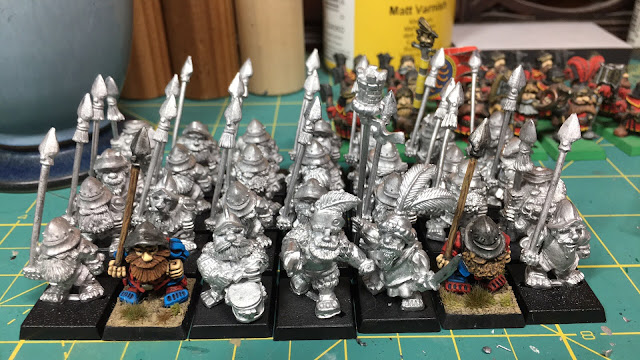 Anyway...stay tuned....this winter is the puff and slash season!!!  I would really like to make significant headway on my dwarf/empire army this winter before some anxiously awaited releases by Clam of his Ewal Dvergar Boar Riders...which are bound to divert my attention when they hit my mail box.