Recently there has been a initiative on the forums and Facebook groups that some are calling "Paint it Forward".  The idea is that you offer up a nice model for someone else to paint...you ship it to whomever accepts your offer...and they are obligated to paint that figure and offer another figure to a different painter...who would then paint that figure and offer another up for grabs...you get the idea.

When Bill from the wilds of western New York offered up one of my absolute favorite Marauder Dwarfs as his Paint it Forward figure...I couldn't resist and jumped at the chance to paint this fantastic figure. 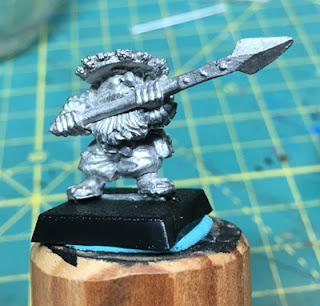 As you know I'm an absolute sucker for the Old Marauder puff and slash dwarfs...the pike armed ones in particular...and this is one of the best of the bunch.  He comes from the much sought after MM15 Warriors range.

As I will be using this guy as a front ranker for my Marauder Dwarf Pike block I painted him in my standard Red and Blue.  Here is how he turned out.

Since I have been away from my Puff and Slash Army for a couple of years now this was the first time in quite awhile that I had to paint with my old Flesh system which is based on an ancient bottle of PolyS Flesh paint....and I realize how much I hate it....but I feel stuck using it for this army due to the fact that there are several other units in the army already painted that use this system.

...I much prefer my current flesh system...but I went with the old and tried to liven it up a bit.  One complaint I have about the PolyS paint is that it is fairly pale and somewhat "lifeless" feeling in comparison to my current Tahlarn Flesh based system.  In hopes of adding some "life" back into the PolyS base color I attempted a thin Ogryn Flesh glaze at the end and I think it really helped...I may be going back and adding that to the completed units!  Its still not great but it looks quite a bit better IMO.

I enjoyed painting this model so much...that I offered another copy of the very same figure as my Paint It Forward offering and it is currently winging its way south to Georgia to be painted by another talented artist.

After I finished this guy I had to get out the rest of my painted Pike dwarfs and mess around with them..here is a quick pic I snapped of the small group.


Painting this guy, and snapping these photos, has gotten me all excited about the Pike dwarfs all over again...and I've started the process of getting more ready to go...