I'm back with yet another Renegade.  While I had intended #14 to be a filler piece while I readied a unit of dwarfs for priming and painting ...I couldn't help to squeeze in one more of these guys....plus the prep work on the dwarfs is taking longer than expected...


As I've mentioned before I have about a dozen Renegades primed and ready to go on my desk so my habit has been to pick them up randomly...decide on one that strikes my fancy at that moment and get to work on it.  This time the figure that stood out to me was one of the Nurgle Marines...in the 1991 Blue Catalog he is called "Tentacle Arm Skull Head" NICE!  This guy has got it going on!


...and like all the Nurgle Renegades is just Perfect Sculpting.  It was the Skull head, in fact, that inspired the paint scheme.  With that skull helmet I knew I wanted Bone White to be a predominate color for the armor...


...the fact that bone white is about as far from a "traditional Nurgle" paint scheme was also quite appealing...:)


Deciding on the color for the Armor trim was a little more difficult but after thorough discussion with my color consultant this is the scheme I settled on. 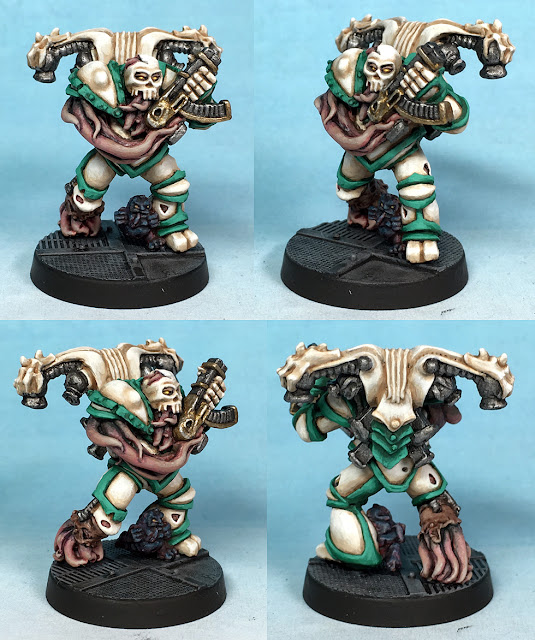 The tentacle arm, leg, and "beard" offered me another opportunity to work with inks and glazes...this was a good follow on to my experiments on the mutated arm of Renegade #14.  This time I started with my normal flesh tone and a strong highlight with Dhneb Stone.  Over this I applied a whole variety of washes...Ogryn Flesh...??? Nightshde...Reaper Purple Ink.... Reaper Green Ink mixed with Badab Black etc...Ancient Citadel Blue ink...etc... I really wet to town!  I did end up highlighting the tips of the tentacles after finishing up with the inks.  I was quite nervous about how it was working out right up until the end...  but I think it worked out quite well and gives a good contrast between the organic tentacles and the synthetic armor.

Also...the name...Tanglefoot...Obviously his right foot is a mass of tentacles so it probably gets tangled on things... but I also chose this name because "Tanglefoot" is the nickname of one of my gaming buddies.

This ones for you Tom