Here is something a little different from the renegades I've been bombarding you with.  Late in the fall the folks from Westfalia Miniatures announced on their FB page that they would be selling some limited number of seconds from their recent Halfman Kickstarter castings.  This was a very successful KS that I watched closely and was sorely tempted to jump in on...but held off for a number of reasons.  But when the seconds were offered, and at a very tempting price, I took a shot and ordered a batch to mess around with.

Though the castings are in Resin...and as you know I'm a die hard Metal figure fan...I really like the sculpting on these characterful figures and there is no denying the crisp casting detail they were able to achieve in Resin.  The figures are gorgeous and full of character...a true testament to the sculpting ability of Michael Anderson.  The other thing that attracted me to them was their obvious similarities in design to my existing Bretonnian Army.  These Halflings are outfitted in a late medieval style that would fit perfectly with the Marquis' Army. 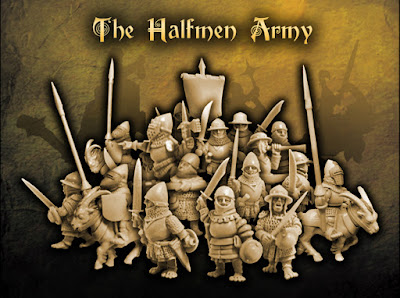 In the packet of random seconds that I received there were a number of different troop types...spearmen, halberdmen, swordsmen, a few archers and a couple of handgunners...there are even a couple of the amazing Goat Mounted Halfling Knights included.  I should have enough to pull together a mixed unit of close combat troops...and with minimal addition a unit of shooty types...these will be a fun addition to my Bretonnian army.


Once they arrived I did some quick clean up (so easy with Resin!!), patched few gaps (they are seconds afterall) and immediately set about painting one of the handgunners as a test model.

Here is how he turned out: 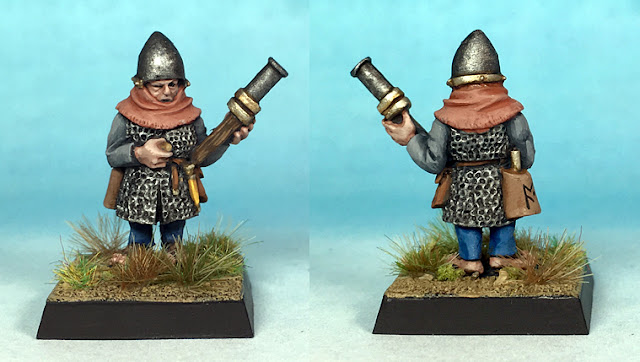 This was a very enjoyable model to paint...and I look forward to polishing off a few more in the future.

...If these had been produced in metal...I would certainly have purchased a whole army of them...so these seconds have been a fun way to mess around with a few of these great figures with adding tremendously to the lead pile.