Adding some Character to my Bret Force

I'm finally back with an update...I'm shocked to see that it has been three weeks since my last post...but such is life right now!  Sorry about that...

Despite the craziness I've managed to get four new figures done....three of which I'll be using to add some characters to my slowly growing Bretonnian army. (the fourth is the missing Squire with bow that completes that unit)

As you may have guessed...since this force is made up of fifth edition models ...the three figures I'm talking about are Bertrand and his coompanions.  However...I don't really care to play any pre-made "characters" in my forces (other than Bugman from time to time)  In my army these three men are Gordon, Jacques, and Tobi. 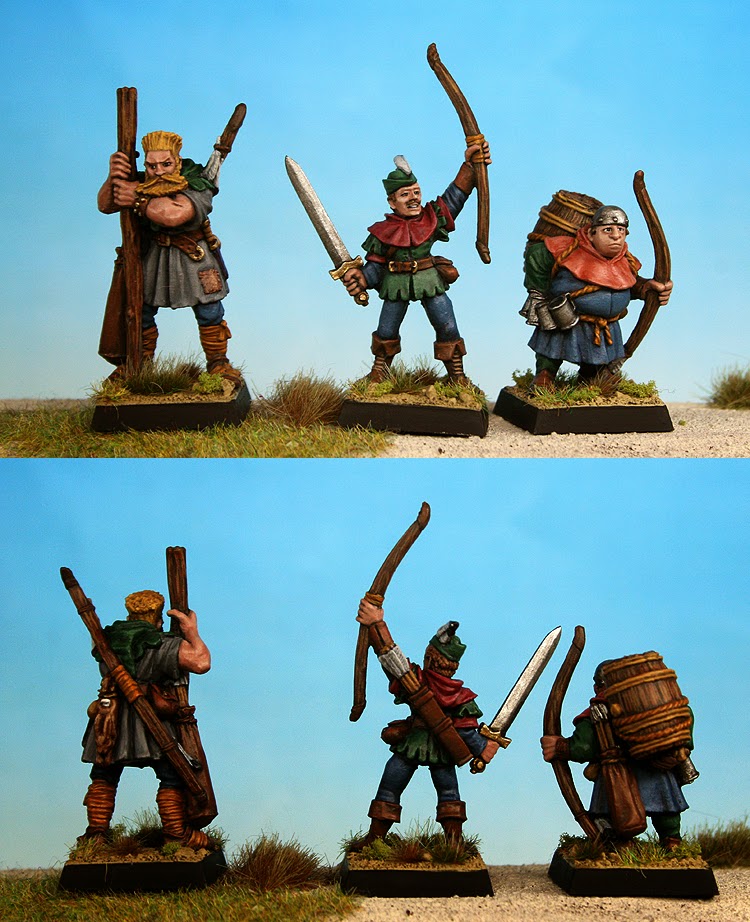 Obviously as they were released these figures were intended to represent Robin Hood, Little John, and Friar Tuck....or their Frenchified counterparts, as the case may be.

...For my army...I have decided to keep the "Frenchified" part that but get rid of the "Robin Hood" part...

...at this point..as I blather on... you may be asking yourself why these three figures have such differing color schemes???   ...and the reason for that is that I do not intend to run these three as a group...a la Robin Hood...but as character models that can drop in and out of certain units....so if you see them with their respective units...it all makes more sense.

Lets look at each in turn

Jacques is the commander of the infantry in the Marquis border force so he is often found leading, or at least close to, the armies unit of elite spearmen...le Cerfs Rouges (the Red Stags).

The figure originally intended to represent Little John...I use as Gordon....the leader of the armies mounted Scouts.   Though he runs on foot (they say they can't find a horse big enough for his massive size) his long legs and inhuman stamina are more than a match for the mounts of the other troops. Some accuse Gordon of questionable paternity...implying that he has some Ogre blood in is veins...but when confronted by such accusations Gordon typically fells the accuser with a single blow from his enormous quarter staff and mutters "u-shud-up..I'm de bestest and de fastest." (I will treat him as a mounted figure during game play).

And finally we have Tobi.  Despite his ponderous bulk...and the 15 gallons of fortified wife strapped to his back...Tobi is able to move through even the densest wood without making a sound.  And for that reason he  is often found slinking along with the armies unmounted scouts.

The fortified wine that he freely dispenses to his troops can act as rations in the field and can keep them warm on cold scouts.  With only that barrel this unit can carry out scouting missions lasting several days....

So there they are...the Character that my Bret force was sorely lacking.

I hope to updating on the Knights that I will be adding to this army soon.  I'm in the process of modifying the Front Rank horses that I found to mount them on and will get them primed and ready for paint...once we have a day arm enough to prime!

Yes...I am alive...I've just fought through a week long flu which has had me completely debilitated (boo hoo...poor me).  I'm finally getting back on my feet and actually did some painting last night for the first time in many days.

Anyway, after I posted pictures of the Dragon Bait Miniatures Executioner set that I painted up recently I received a couple of requests for information about how I did the wood graining on the chopping block.

Luckily I took a series of pictures of this figure while I was painting it in hopes writing up a longer "how-to" post.  That post never materialized...but now I can use some of those pics for this quick demo.

My technique for wood graining is all about contrasting colors and texture...and applying these colors with short quick motions....and this is true for large surfaces like this block as well as narrow spaces like along a bow stave or weapon haft.

Here we go.  I started with coating the entire block with Vallejo Model Color 872 Chocolate Brown.  Nothing fancy here...just lay it on thick enough to cover the Dark Gray primer.