So...if you follow the blog you will have noticed a rather dramatic drop off in posts about painting.  There is a very obvious reason for this...my painting mojo has left the building!  I have  been extremely short on time this summer and when I have had a few minutes I just can't bring myself to paint for some reason.

...that is until this last week!  After seeing all the wonderful pictures from the BOYL event I've started to get really excited about the Oldahmmer in the NewWorld event coming up this fall.  So I've been back in the saddle for a few nights and it feels good to be waving the hairy wand again!

The first thing on my plate was to finish up a couple of commissions ...pieces of which you have seen pop up on this blog and in various forum over the last year or more.  Well...I've completed two of them and managed to get some decent pictures before shipping them back to their rightful owners.

The first commission was a group of five chaos figures for my most patient client Hashut's Lil Helper (HlH).  You may remember that I have been painting a series of Chaos warriors for HlH that match his already painted MM90s.  Well in the last batch of figures he included 5 additional figures for me to paint as well.  These included one more Chaos Warrior and four Citadel chaos dwarfs.

Lets take a look at the group first and then each of them individually.

Please remember that HlH has requested that I leave the shields off and bases bare so that he can do those at his leisure to match the rest of his forces.

First up if the wonderful Marauder MM91 Chaos warrior.  There is some speculation that this figure was the inspiration for one of the MM90s...but its not as obvious as the others IMO.

...Also I forgot to take a picture with his "mini-me" before I shipped him back to HlH....Doh! 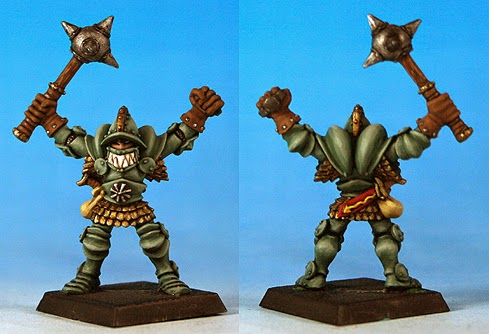 He is a really great figure...I like the toothy mask...the mace is just this side of being TOO big (IMO)..he has awesome chaos armor...whats not to like.

Next up we have some of the wonderful Citadel Chaos Dwarfs. 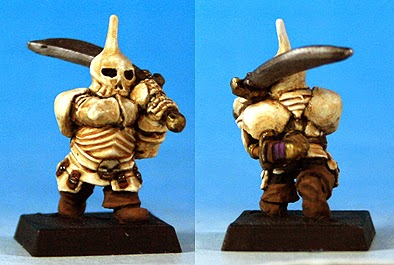 Here we have the taint of chaos creeping in in slightly more obvious ways...this guys goat leg and hairy arm are a testament to his loyalty to the Corrupt Powers.  Plus I always enjoy painting Blue armor...?

Yet more mutation is obvious with our next victim...the two headed chaos dwarf....I had to give them different color beards just for fun. 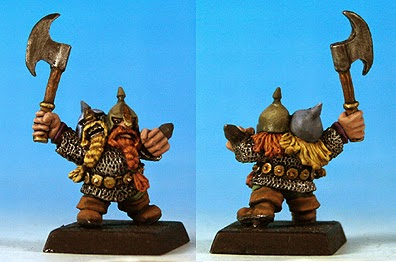 Last but not least we have the most twisted of of all in this little group.  I'm a little unclear on the origin of this figure...its not a citadel release...I believe it was sculpted by Phil Lewis...?  Anyway I think he makes a nice addition to this chaos force.  As you can see I've been experimenting with colored metalic paints a bit of late... 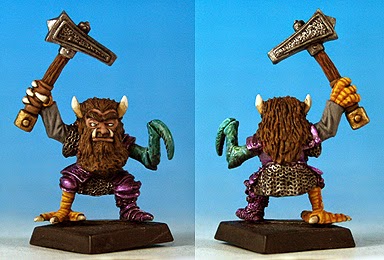 Well there you have them...Or rather HlH finally has them...:)

It was a fun project to work on and I really look forward to working on more of my own chaos figures in the future.

More on the second commission in my next post.