Following on the heels of my test paint scheme for the Retained Knights I took the opportunity to do the same for "Imperial Guard" figures.  As stated before I'll be using Alternative Armies Muster Troops as my standard Imperial infantry figures.  Once again I've gone for a fairly "realistic" paint job on these guys.  Though I will be using them mostly for Boarding Raids and other shipboard actions I wanted them to stand out from the grey terrain I will be using them so I've opted for a more natural woodland style camo for the cloth portions and a very dark gray/black for the armor and helmet.

Over all I'm pretty happy with how he turned out.  The camo on the pants proved to be a bit fiddly...this is the first time I've attempted camo...and I will need to refine my system a bit.  The same is true for the gray areas...The method I employed turned out to be very "layer intensive"...so as I apply this scheme to a whole squad I will attempt to streamline that process somewhat.  Also like the Knights I may come back and add some unit insignia to one of his shoulder pads.

As this was the first time I had painted camo I followed the technique laid out by Stone Cold Lead in his tutorial for German SS Oak Leaf Camo (HERE) ...Obviously I changed the color selection a little bit.  It was very helpful to have a system to follow...and to use tooth picks to paint with...:)

Also...following up on the Retained knights here is how I decided to deal with his weapon... 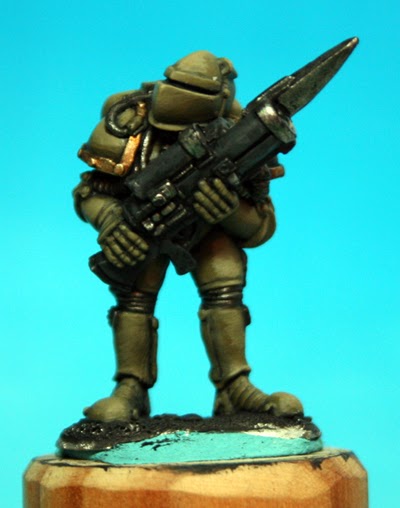 I've added metal to a few select bits and painted the rest a very dark gray.  Looking at it now I'm  not entirely happy...I think in the future I will do brighter highlights but only on the edges of the gun bits.