Well...Time to get back to my Modular table tiles.  I've been holding onto this one for a while waiting for some computer issues to resolve themselves...and while they haven't really I will just make do with the crap ass computer I'm still dealing with.

Anyway...if you will recall my last blog post about the modular table tiles I was pretty much done...all the rough terrain had been painted and highlighted...and then further enhanced with static grass and tufts where appropriate.  After that I really had two major tasks to complete....
Repair Work


As I finished up dry brushing and texturing the boards I noted two areas on two of the tiles that needed some "repair work."  The first was on the S-Curve road board...here right in the middle of the road was a patch where I had been too heavy handed with my final color highlight and it didn't fit with the rest of the texture of the road...you can see it here...that big blotch of pale tan in the middle of the road. 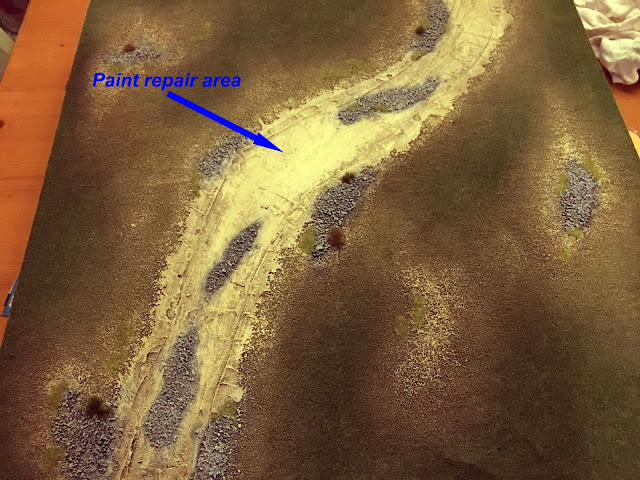 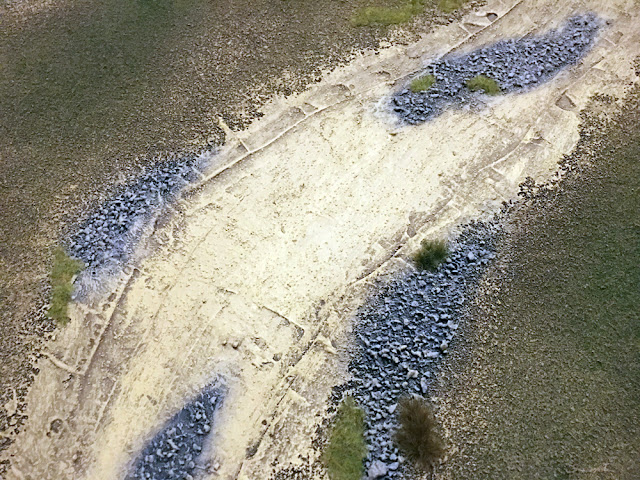 rectifying this situation was not too complicated.  I simple painted over the entire patch with the base color brown. 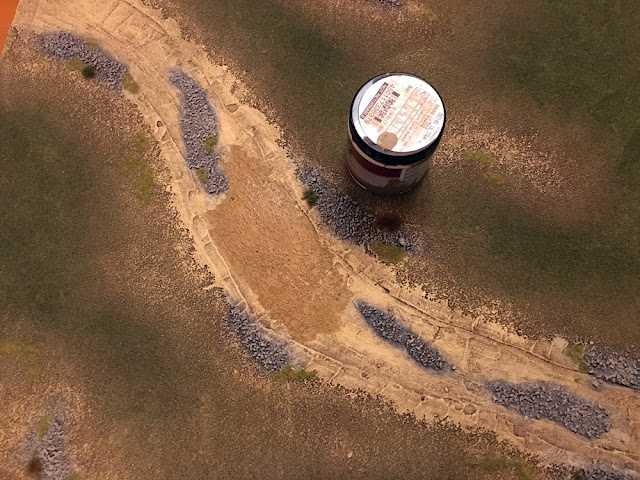 From here I simple followed up with the rest of the dry brushing system that I had used everywhere else and brought it back up to the lightest tan...but I was much more thoughtful about keeping my brush very dry and actually allowing some of the darker colors to continue to "shine" through and give depth to this hole patch. 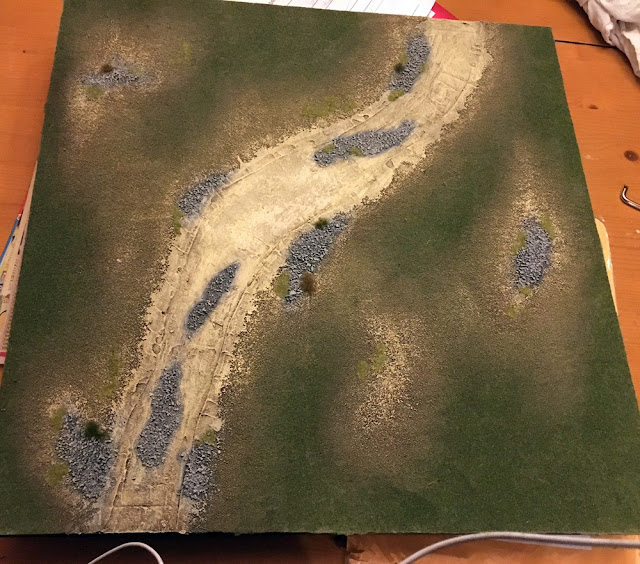 I'm happy with how this repair worked out...I think it blends in much better now.

The second repair was a bit more involved and was located on the Open terrain board.  As I was dry brushing the open terrain tile I noticed that there was an obnoxious ridge in the textile cloth that formed the base of my efforts.  It appears that this was probably a problem that started with the fact that I didn't iron my terrain cloth before gluing it down.  This ridge is the remnant of a lazy wrinkle which apparently had not been tacked down by my initial gluing efforts.  Its hard to pick out in this picture but I will try to indicate it... 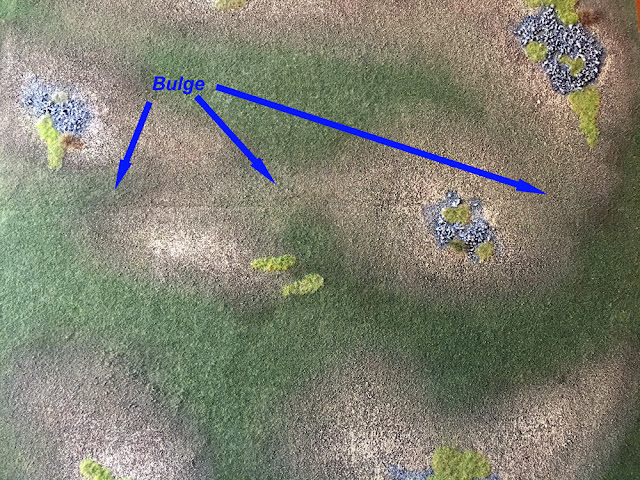 There is actually an air gap of about an 1/8th of an inch under there...you can see it here on the edge of the tile... 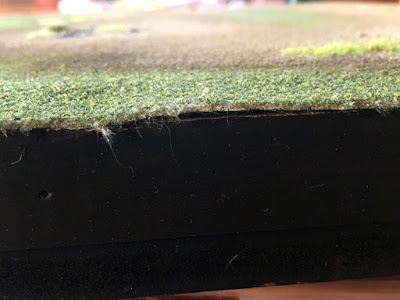 In order to correct this issue I gathered some supplies including a syringe and my wood glue.  I mixed the wood glue with water to make a fairly thin solution.  I then used the syringe to "inject" this glue solution in dozens of places along this "ridge." 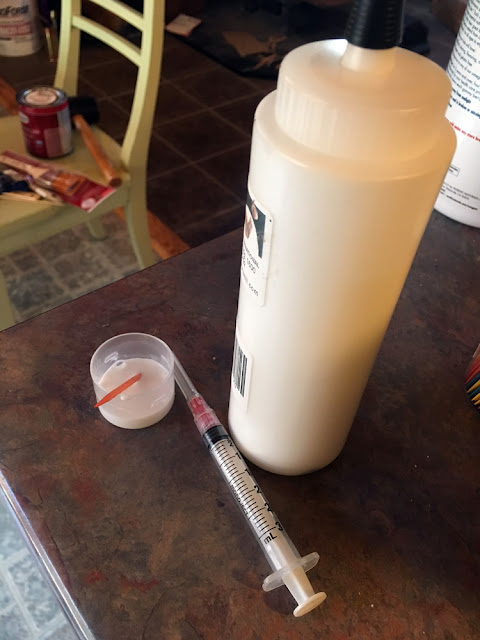 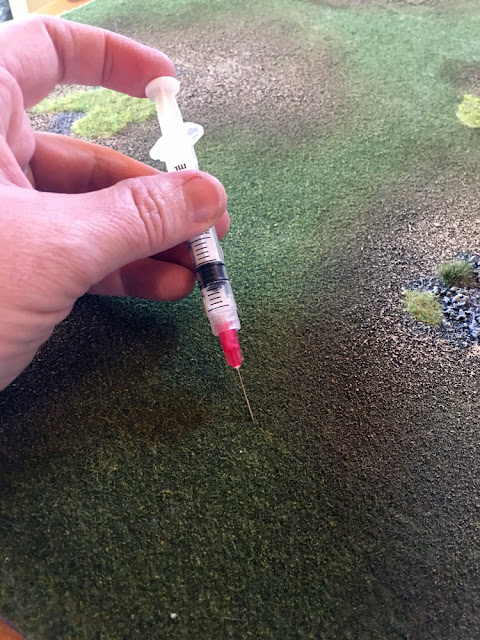 Once I was confident that I had a good amount of glue under this ridge I weighed it down with whatever I had to hand and let it sit overnight to cure. 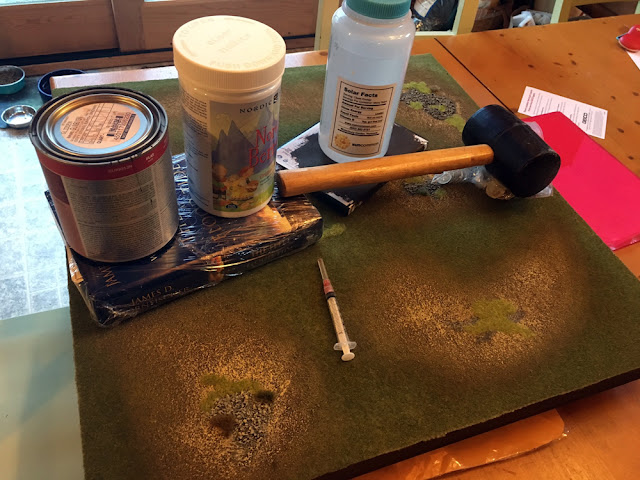 the results were good!  The recognizable ridge was greatly reduced and felt solidly adhered to foam board below.  Ideally I would have  made this correction earlier in the process...it had certainly influenced my dry brushing of the fabric and surrounding area...and these issues are nearly impossible to fix now without the high probability of screwing it up much worse!

Anyway...I call it a victory.

The water feature was the more intimidating of the tasks that I needed to complete.  I've read too many horror stories of this process going wrong to rush into it.  To that end I did a lot of research and watched several YouTube videos on how to do it successfully.  I also consulted with my own panel of experts...well...one really...Rusty, whose wonderful tables have been to focus of much play at the OHNW events.

On Rusty's recommendation I picked up this product for the water effect.  It is a two part epoxy product that is typically used to put that thick bullet proof gloss finish on things like bar tables etc. 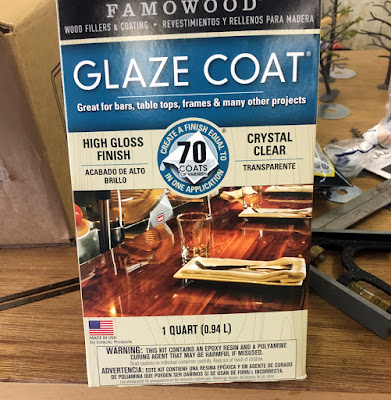 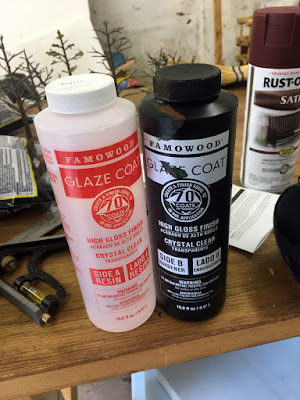 Once I had my material I had to prep my pond.  After much consideration I decided to try for a murky green water effect...I've done a lot of fishing in ponds in my day and none if them have been the beautiful blue clear water that some opt for on their tables.  I also wanted some "reeds" to be present in my pond to further suggest that it was a warm fertile pond with lots of gribbles living in it.  For this effect I followed Clarence's example once more and used bristles from a natural fiber whisk broom that I picked up at the hardware store for a couple of bucks.  This thing will provide thousands of reeds for future work as well.

To adhere the reed clumps in place I used Hot Glue because it tacks and holds fast quickly. 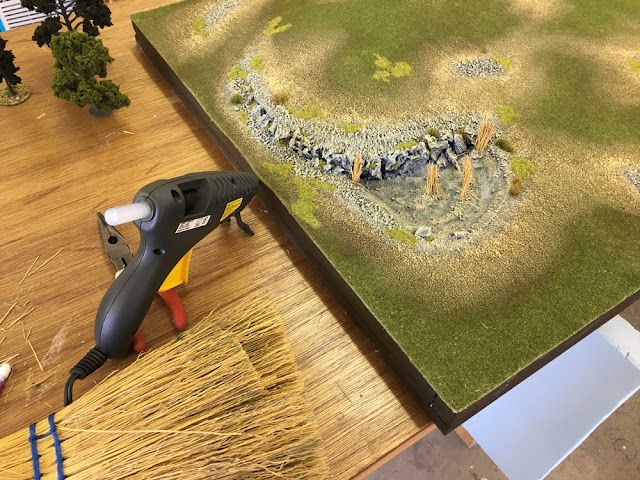 After I had placed a bunch of clumps around I went back and trimmed them all a bit to get a more uniform height. 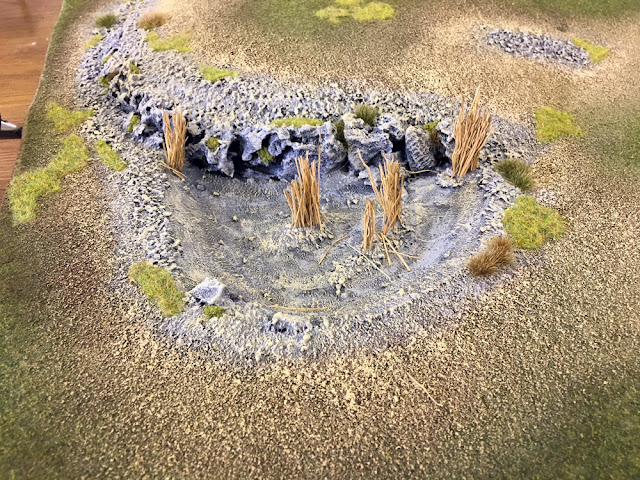 Once the reeds were in place I set about coloring the bottom of my pond.  I sued a mix of green and brown craft paints for this.  The darker green going in the deeper parts of the pond and lighter green and brown toward the shallower edges.  Here is how it looked once dried. 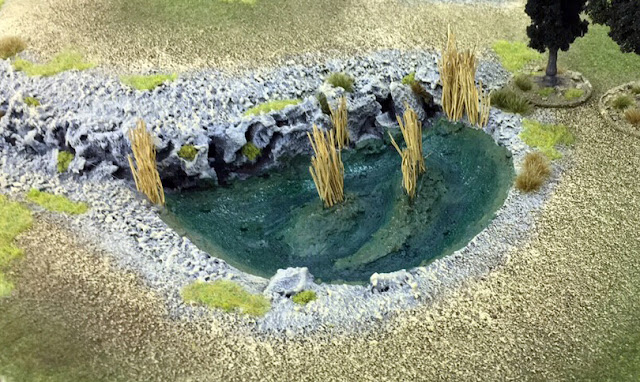 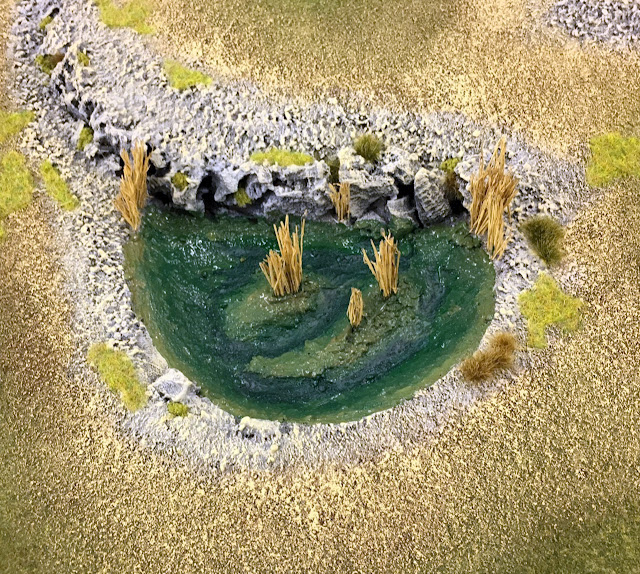 Next came the moment of truth...the actual pour.  The process here is pretty straight forward but pretty tedious.  You start by measuring out equal amounts of each of the two liquids and then pouring one into the other.  You then mix this for SIX MINUTES!!!  which seems like an eternity...you then pour it into another cup and mix it for SIX MORE MINUTES!  it seems insane...but I wanted to follow the directions to the letter.  To add further depth to my pond I also added some P3 green ink to my resin mix and poured it into the pond... 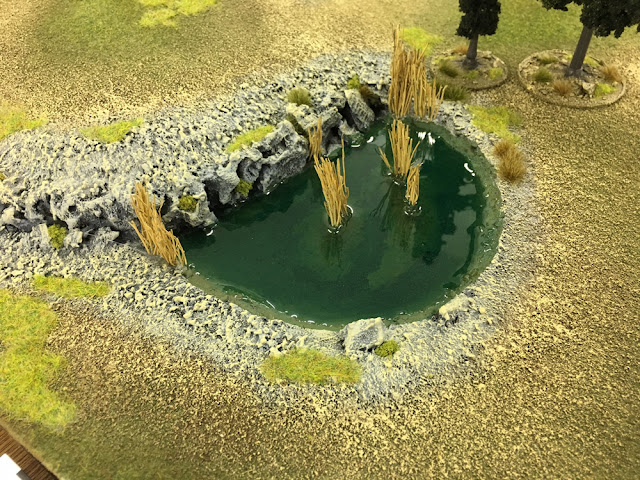 And of course I came up a bit short!!  oh well....I let that dry for a while and then used a straw to gently blow on the surface to push out the tiny bubbles that rose to the surface as the resin cured.  There is something oddly satisfying about this process.  I then moved the entire piece into a clean area and let it dry for two days.

I followed this by a second smaller pour using the same tedious technique to fill the remainder of the pond basin...and once again let it sit tor two days before giving it a look. 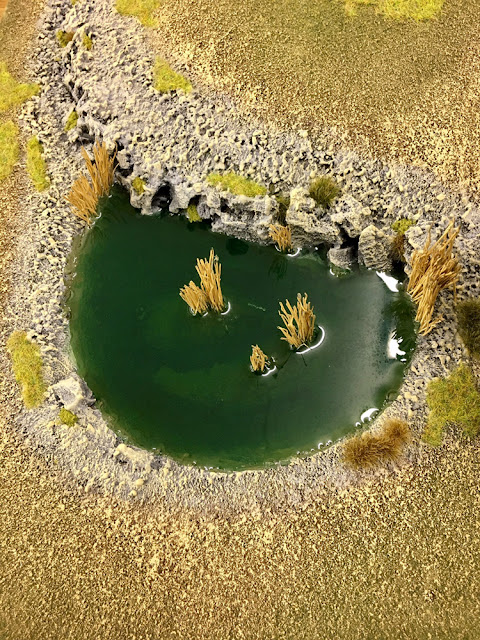 It is not without its flaws...there are a few bubbles deep down in there that I cant get rid of but they are only noticeable if you look very closely...over all I'm very happy with how this worked out and will be less intimidated by future water work. 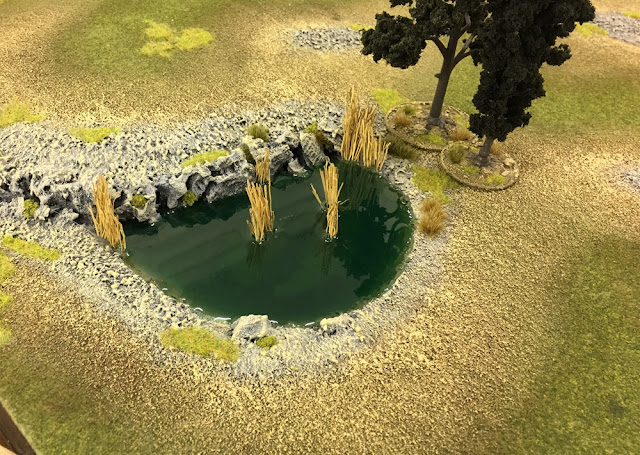 So...that pretty much does it for the first set of tiles for my modular project...now I actually need to play a game on it!!

Next I'll hope to bring you the conclusion of the house building projects to date.