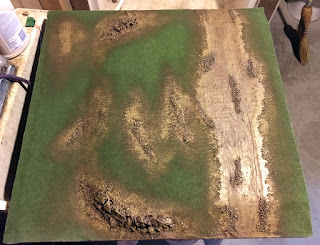 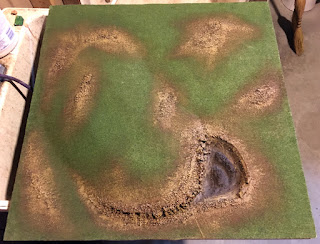 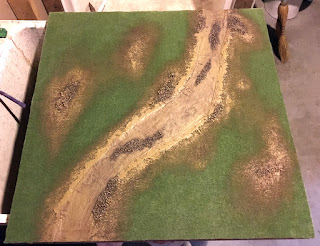 This same process was employed for the final tan color as well...though I used an even drier brush for the dry brushing...and again...expanded the areas of color yet further.  Here are some of the same tiles shown above with the final tan color (VMC Buff) applied 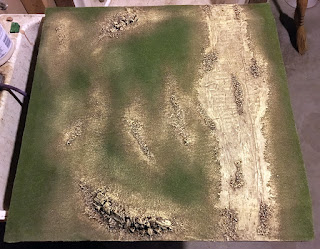 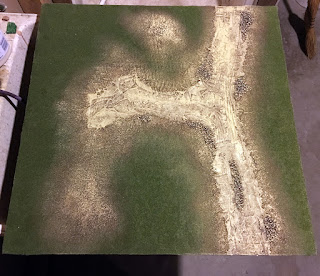 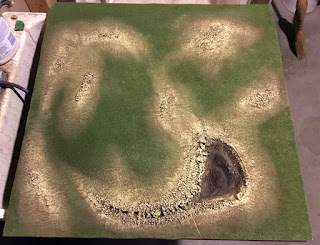 YES!!!  Its finally starting to feel like the semi-arid/high plains kind of feel that I shoot for with my basing technique.

At this point I had some significant decisions to make.  On the Quindia Studios blog...at this point Clarence went back in and painted all the rocks and rubble a dark grey and started the highlighting process on them all over again.  I was conflicted about doing this.  Coloring the rocks and rubble the same shades as the rest of the "earth" made sense to me...and looked good...maybe I could skip that step...?  In an effort to determine which way to go on this choice I took the opportunity set up the castle hill tiles and put my boarder fortress on to see how it worked together 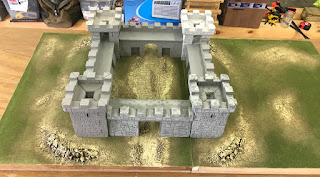 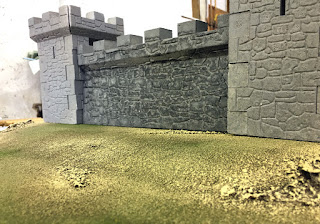 It looks quite good!


...so decision made!  I will repaint the rocks and rubble.  This will also help to break up the earth colored areas (which had gotten quite large) and provide an interesting contrast with the other colors.


For the rocks and Rubble I decided to employ some colors from my stash of Craft paints. 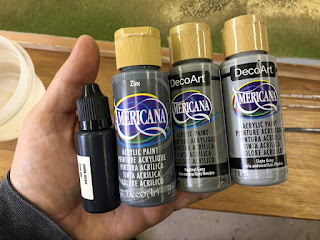 I started with the Zinc Color mixed with a little black to form a very dark grey and applied it to all the rock and rubble patches and cliff faces on the tiles. 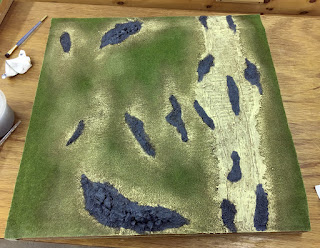 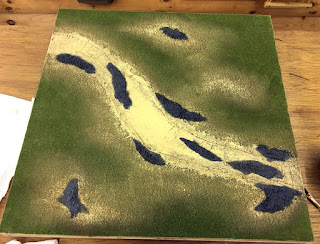 Feeling a bit nervous that I had made the wrong decisions about the color change I went ahead and highlighted up one patch of rubble on the S-Curve tile to get a better idea of what my final product would look like... 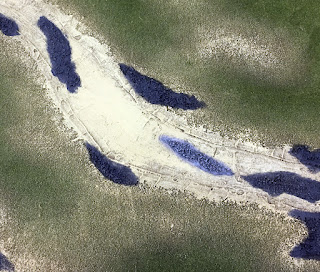 Ok...that looks a lot better...so I followed through with the highlighting of the rocks and rubble throughout all the tiles. 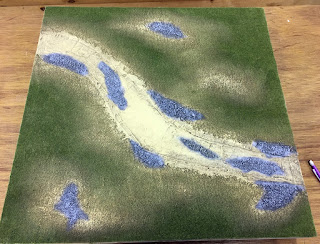 At this point I felt that the contrast between the tan and grey was still a bit severe...to rectify this situation I added one more highlight that was a mix of the lightest grey and bit of the Buff paint that I had used as the final brown highlight.  This further lightened the rocks and rubble and slightly reduced the contrast between terrain types.  I also used a very light layer of buff stippled onto the areas around the rocks and rubble to ease the transition between the two colors.

Here is the same board with these final additions made... 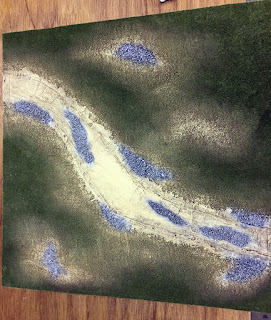 Excellent!  At this point I'm feeling done with the painting portion of this project.

Here is a pic with two of the panels together...giving a better idea of what the whole thing will look like when complete 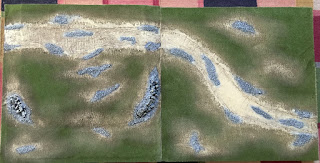 That seems like a good place to stop for now.

In the next installment we will look to add some additional color and texture to the boards by adding some static grass and tufts etc. to selected places.