Learning to Crawl....all over again!

Last Friday I was able to convince a group of four friends into playing a game of Cavern Crawl with me.  Cavern Crawl is a fairly simple set of rules under development by Graeth the Grot who has an excellent blog and the rules available here Drums in the Deep.  I messed around with an earlier version of these rules back a couple of years ago (posts about this can be seen here, here, and here) and really enjoyed them...and this seemed like a good time to give them a whirl again.  Since my normal gaming space (garage) is actually being used to store cars this time of year (crazy I know...priorities!) I needed a game that I could easily transport to another location and wouldn't take a long time to set up...Cavern Crawl fit the bill perfectly.

I built our adventure around the basic scenario that Gareth included in the version 2.8 Rules that I would be employing.  In hopes of making things a little more interesting I beefed up the number and quality of enemies in the mission and also buffed my heroes a little bit.  For our adventuring party I chose to play to the figures I had available...this somewhat limited the racial content of the party (I don't have any painted elves or halflings at this point)...but left us with a Human Wizard, Human Ranger, Dwarf Knight and a Dwarf Barbarian.  Against these heroes I pitted a selection of Orcs and Goblins of all qualities, a Troll and a two headed Dire Wolf.

While I was too caught up in the action to take to many photos or copious notes here are a few of the pictures I did take...

Our Party descends into the Cavern and encounters their first enemy... 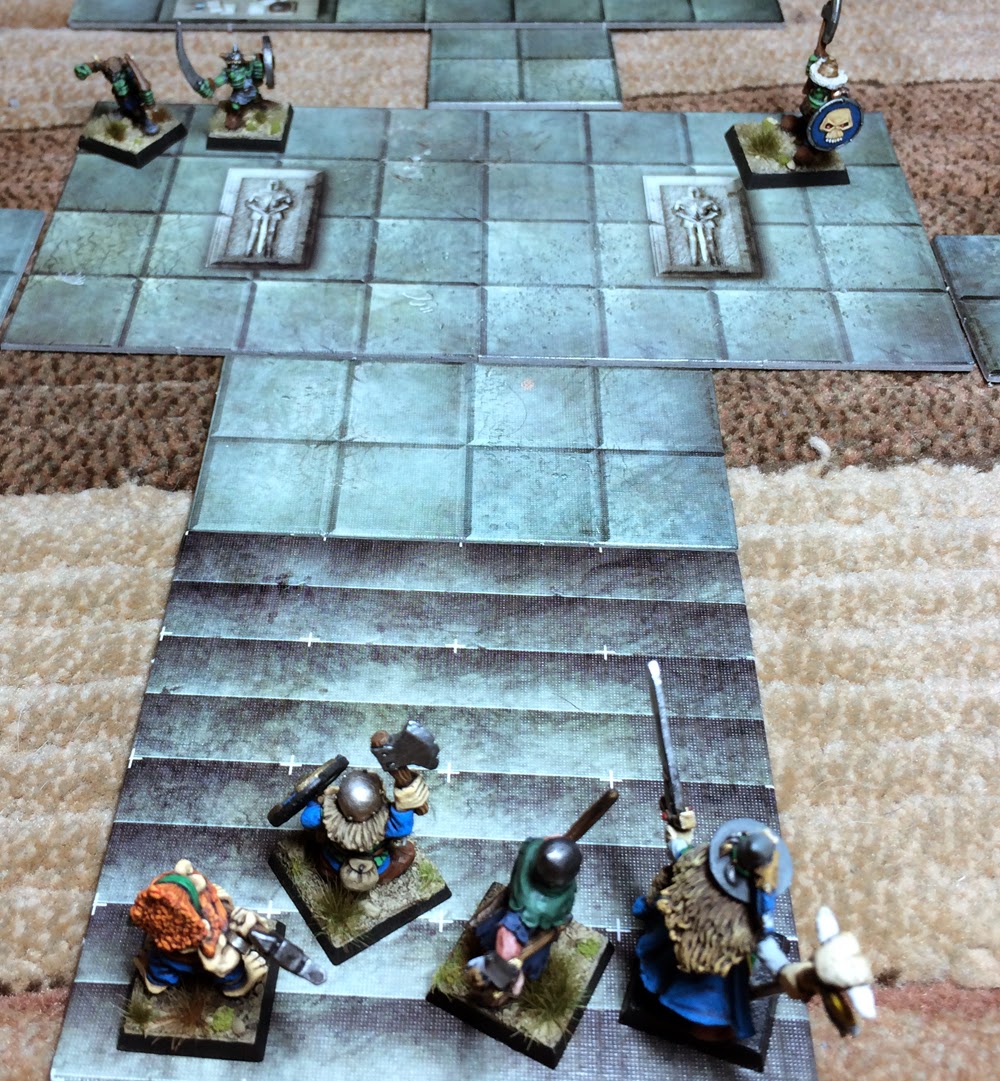 Everyone gets a chance to "pet" Fluffy.... 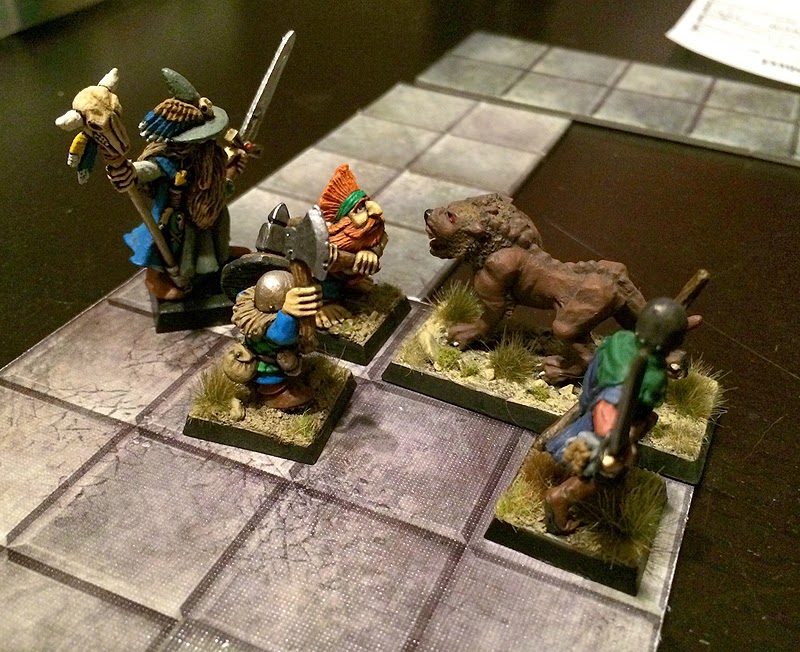 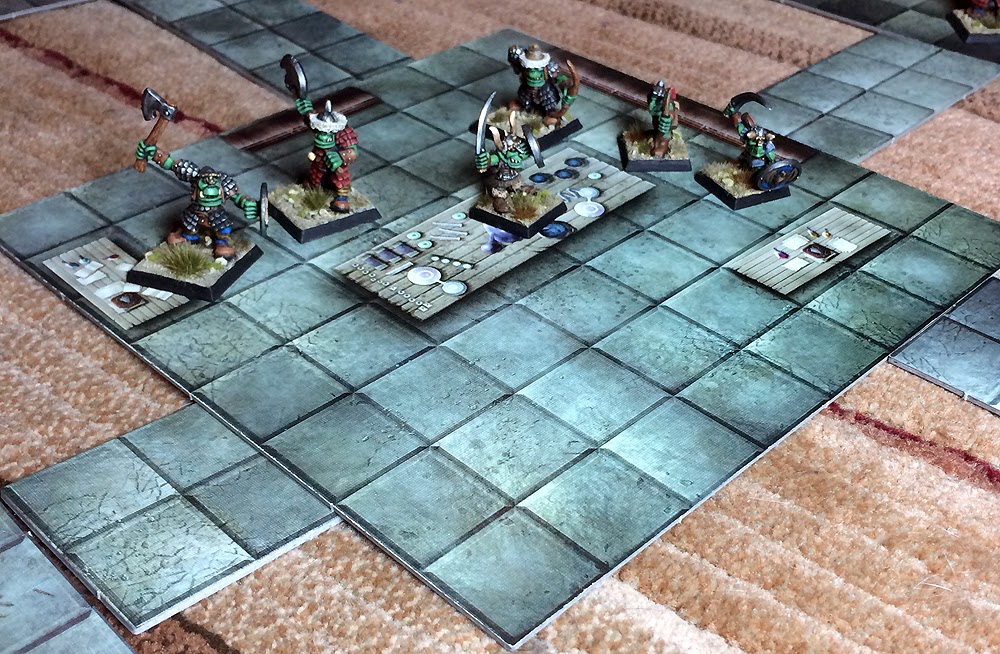 Alright...alright...Que up now!  there are plenty of baddies for everyone! 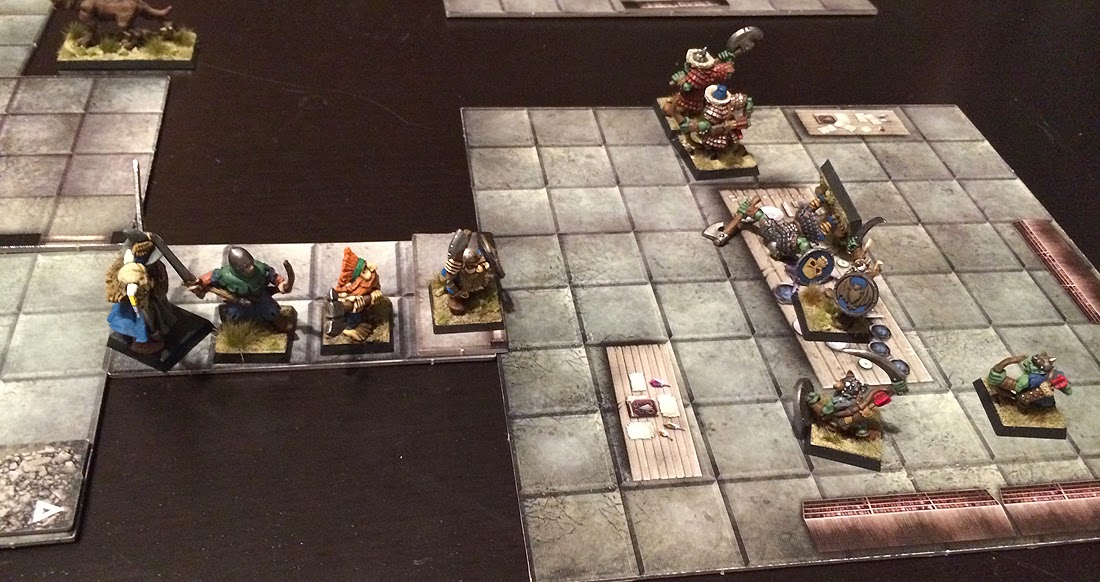 Ambushed by a couple of goblins!  ....silly goblins... 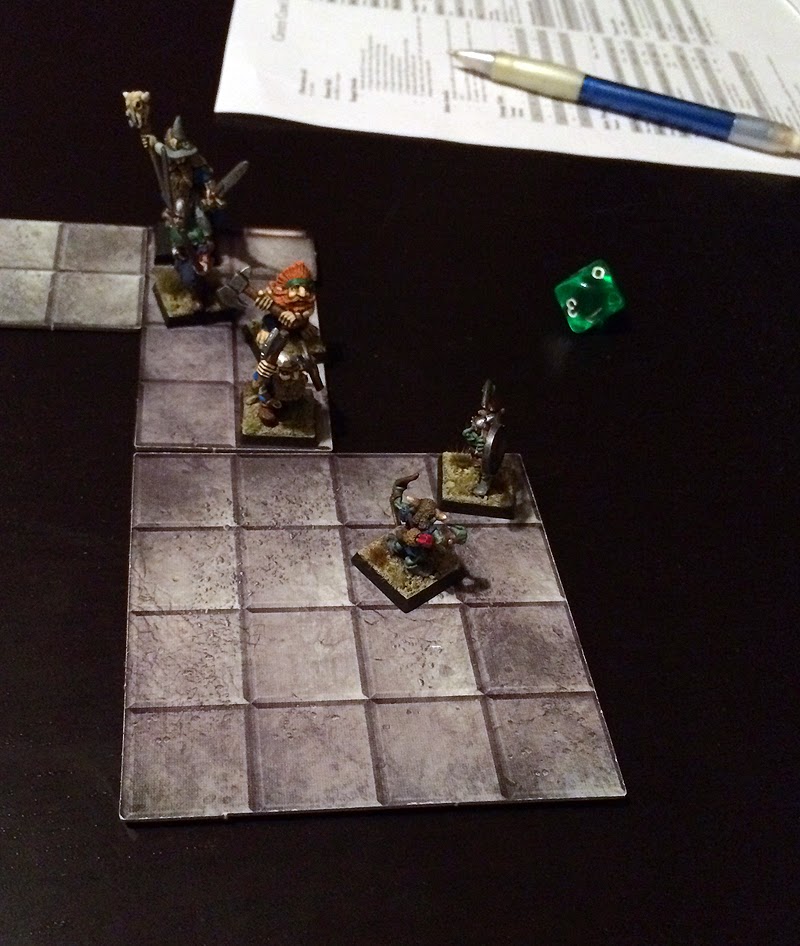 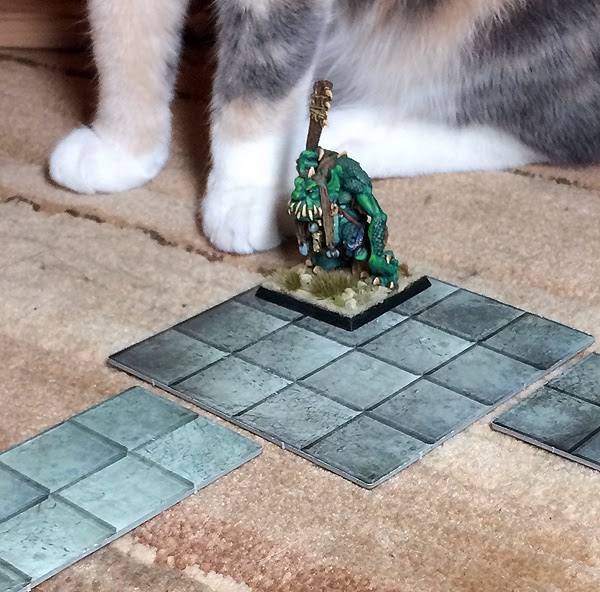 The Orc warlord and his companions... 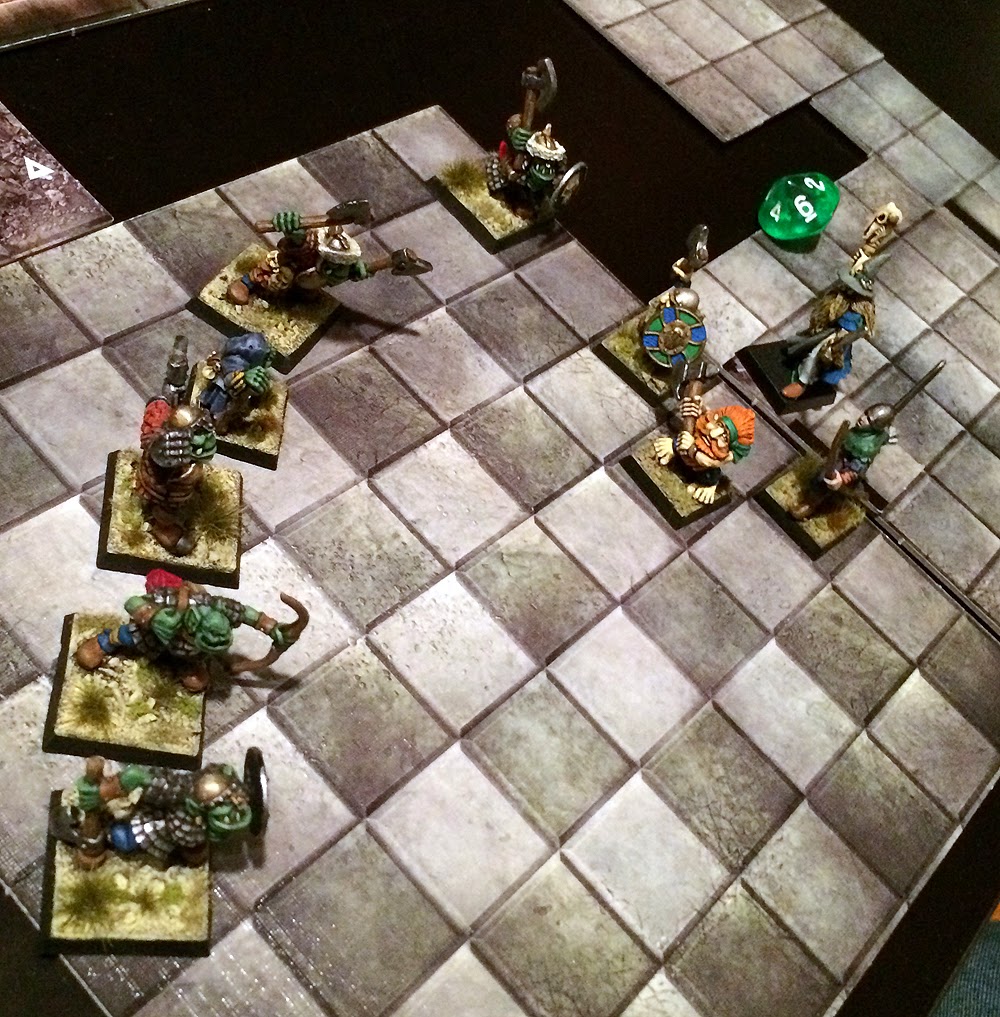 ...And the final Bloody battle is engaged! 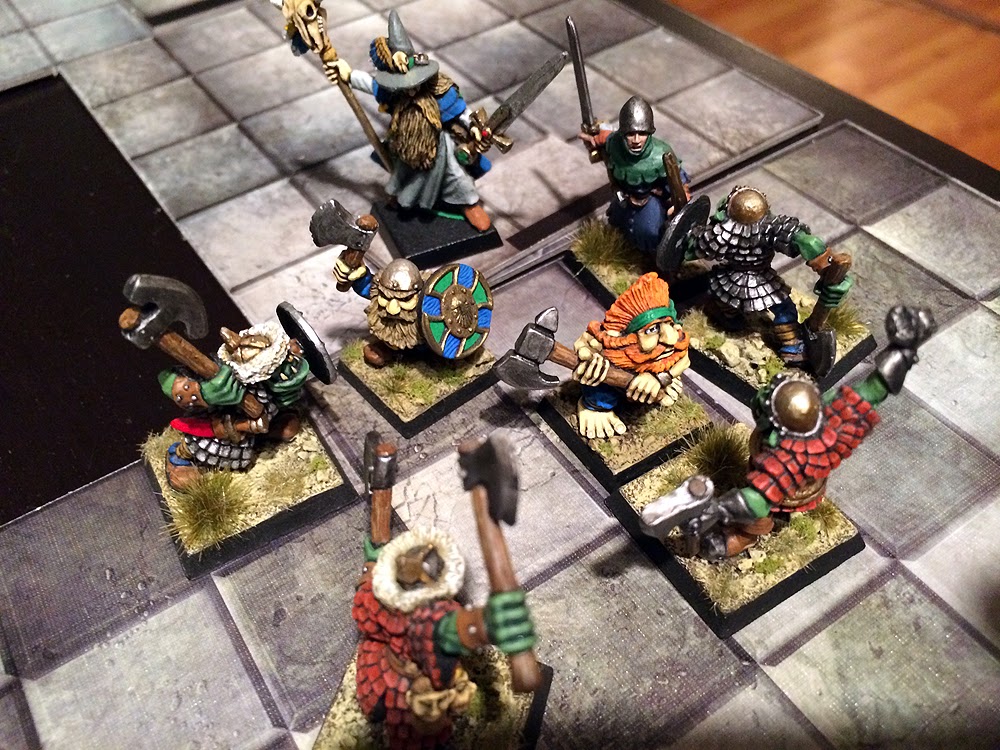 Our heroes did amazing well up till the final room...in fact a lucky roll by the mage killed the troll in the first round of combat!  ....bbbbuuuuttt...the final room proved to be too tough for them...the Orc Warlord and his great weapon turned out to be too much for them to handle.  It was a long drawn out fight but in the end the dice turned against our adventurers and they were slain to a man.

I was a great night and we all had a lot of fun.  I look forward to seeing the improvements that Gareth has made to the system in the still WIP 3.0 version and I'm sure we will be back to play this again soon.

Sorry for the lack of written out detail for this encounter...but time is of the essence in the run up to the first LPL rounds so this is all I have time for.