Here we are with a second post on my growing Goblin Wold Boy horde.  In addition to the painting the 23 riders from the Marauder MM32/34 range of wolf boys I also painted up a few of the Marauder infantry Goblins from the MM30 range which I "converted" so they could be mounted on wolfs.  Basically all this requires is removing the slotta tab and possibly bending the legs a bit to make them fit.

Here are a few of the archers that I have added to my wolf boy unit which are converted to wolf boys with their associated lines drawings from the catalog.  you can see that they naturally have a fairly wide stance and are therefore pretty simple to convert to mounted troops. 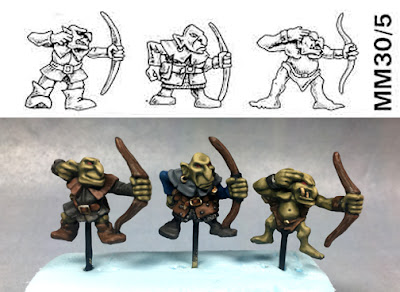 Welcome to the cavalry Boys!!!

One thing that the MM32/34 Marauder range is lacking is unit standard bearer figures, so once again I have "converted" a couple of figures for this purpose.  One of these is a marauder wolf boy who had a broken weapon to start with which I removed and added a banner pole.  The others is a citadel Goblin infantry figure that I felt looked goofy enough to fit with the Marauder wolf riders. 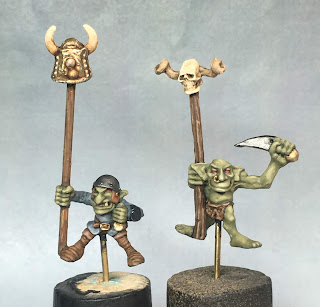 The last two new wolf riders I would like to share with you are also "conversions" from non-wolf riding figures.  The first was originally intended to be mounted on a Giant spider...but I have reduced him to riding on a wolf.  This required only minor leg bending and removal of a few of the spiders that were crawling all over the little devil!  I left a few in place to demonstrate his former affection for arachnids but have reduced the number significantly.

The second of these is the archer from the Marauder Goblin Chariot...and as he has a wide stance he was a perfect fit onto a wolf with little to no modification.

Here they are with their assocaited catalog pic shown after. 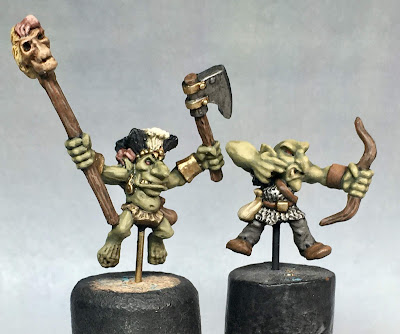 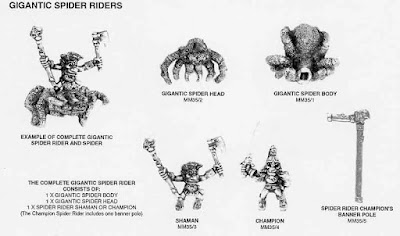 I have five more wolf boys on the corks at the moment...four are additionial infantry conversions and the fifth is a duplicate of a mounted archer that I needed to bulk up that unit...but otherwise every model in this grouping will be a unique sculpt!  I'm quite excited about that fact.