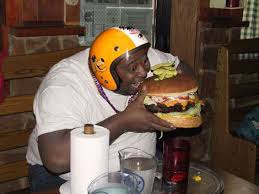 There had be entirely too many SREs (Soylent, Ready to Eat) on this mission and even those had been hard to come by since their last encounter with Narblaz and his crew.

But Grove’s dreams of ambull burgers quickly disappeared when private Kirkell plopped down next to him and ...the stench came with him...

Pvt. Kirkell replied self consciously “sorry corporal...it’s my arm, still...I’ve washed it at least a dozen times but the stench of that Lopezilla just won't wash off...? Look! My goddamn body armor is discolored!!!”

Grove nearly gagged as the idiotic private waved his disgusting arm in front of his face...

Kirkell had been lauded as a hero when he retrieved the emergency homing beacon from the ‘uge pile of Dino dung during that last fire fight with the Orks. That pile of scat had included the remains of that dumb ass, Pvt. Jenkins, who had gotten him self eaten while taking a leak....as well as the homing beacon which was their only way off this god forsaken planet. But now...everyone was fed up with the stench...

“Well go wash it again Private!! And do it quick...looks like the orks are coming back!” Grove barked as he checked his ammo load for the hundredth time and peered over the ancient stone wall that surrounded the LZ.

They had to hold this LZ until their ride arrived...that was the only way Corporal Grove was going to get his burger...

Luckily...Sargent Major Mahan (Mayhem) was on the job and quickly set about organizing the defense...while also keeping an eye out for other larger carnivores that had been reported in the area.

Well..It has only taken two years...but we finally played the next game in the Putney Prime campaign that started with the firefight, and poo pile, described above. To review that action please read this old blog post which relates the whole story.

To summarize...fighting between Imperial Army and ork forces on the strategic space station, Excon Valderz, had spread to the surface of Putney Prime, the planet around which it orbits. However both forces found the surface of Putney Prime to be a place of nightmares, and thoughts quickly shifted from conquest to escape. During their last engagement both forces had searched for the missing homing beacon which could be used to summon a ride off this death planet...and the Imperial Army force had found it (and private Kirkell had acquired his stench)...though not before both forces had incurred significant casualties to both enemy fire and a rabid Lopezilla who consumed many fighters...

Now to make good their escape!

The imperial forces have retreated to the designated Landing Zone (LZ) and established a hasty perimeter around it using an ancient, collapsing stone wall and some equipment crates filled with dirt as defenses.

But Marblaz (who is totally different than Narblaz from the last game...trust me) and the ork reinforcements are hot on their trail. There are also large fauna in the area, all of which are hungry and aggressive.

Realizing that they would be significantly out numbered and hoping to slow the enemy down, Sargent Major Mayhem decided to use his few remaining marines to hold an observation post forward of the main line of resistance which was manned by the remaining imperial army troopers at his disposal.
The Marine outpost is hidden until enemy approaches within 6" or they break cover to fire upon the Orks. 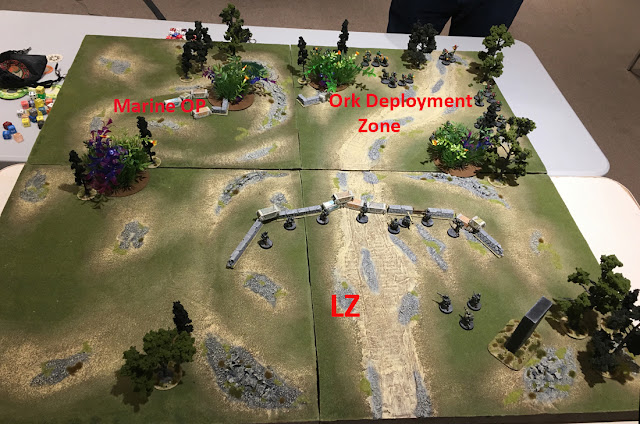 The remain Human troopers are arrayed around the LZ perimeter with Sargent Major Mayhem organizing the defense and supplying fire support with his heavy bolter. 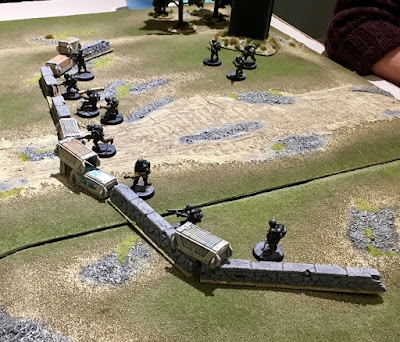 The Orks are broken into three squads (Orange, Red, and Yellow) As well as a small command section consisting of Marblaz and his Standard Bearer and Musician.  The orks opt to enter the table from the northwest corner...two squads approach down the road...into the teeth of the Human defenses while one Ork Squad shifts to their right hoping to apply pressure to the LZ Perimeter from a different angle. 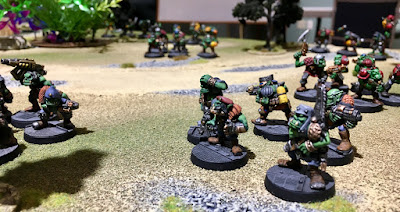 Initial fires between the forces are inconclusive with only minor casualties inflicted.  However the push up the middle is gaining momentum and Human defenders are falling despite the cover provided by the ancient wall.


But their return fire is also having an effect and one ork squad is pushed to left and into the thicker cover of a small patch of alien flora...attempting to approach the left of the Human position under the protection of its foliage.

About this same time, snarling and stomping is heard from the humans left flank and suddenly a large Dino-saur appears and moves toward the LZ...and its hungry!!! Followed closely by a second that has been tracking the orks for several klicks and comes in behind them... 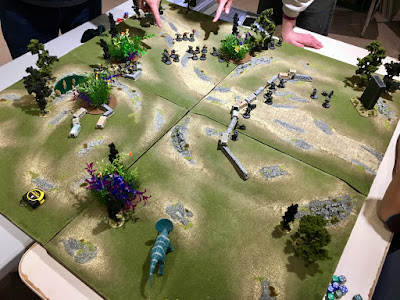 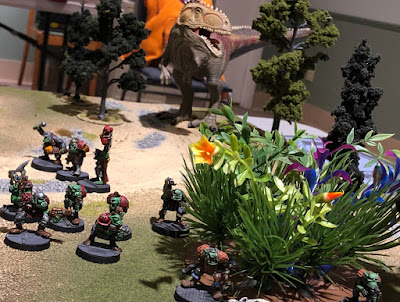 The Ork Squad skirting right stumbles upon the Marine FOP and comes under heavy fire from their sandbagged position.  Though they take no casualties initially they are temporarily pinned and unable to continue their flanking attack. 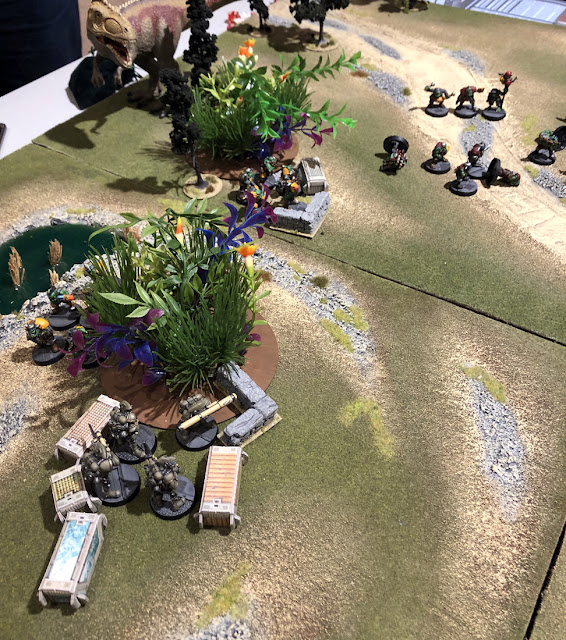 Mayhem passes the word that their ride is inbound and to be ready to retreat to the shuttle in phases when it arrives.

Ork Pressure on the Human right flank increases as the orks sneaking through the "woods" suddenly appear just outside the perimeter defenses and attack!  The threat is significant enough to draw The Sargent major to respond.
After revealing themselves to the flanking ork squad the FOP Marines also use their long range weapons to take Marblaz and the Orks central trust under fire from the flank causing significant casualties in a hurry...

But just as they are finding the range, the call comes in from Mayhem that they must abandon their forward position and retreat to the LZ for pick up...doubting that they can all successfully disengage and make good their escape...two marines opt to stay behind and hold off their enemy while the others make a dash for the LZ.


The Shuttle craft lands in a cloud of dust and steam and opens its hatches for pick up.  In hopes of buying the surviving Imperial troops some time the shuttle craft deploys its defense droid to lay down some covering fire ...and the metal Goliath strolls onto the battlefield.


On the Far let flank a small group of orks rushes up to the defensive wall and one of them lays down a massive sheet searing fire with their Flamer.  Mayhem rushes to aid his troopers only to be set alight himself!!  But thanks to his power armor, and its fire suppression system, he is able continue the fight, mowing down several of the attacking orks with his heavy bolter...RAMBO STYLE!!! 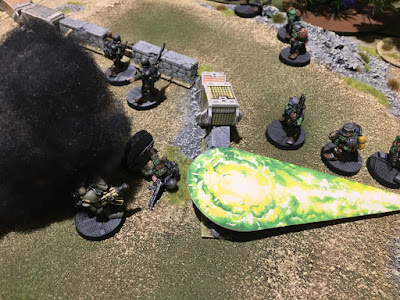 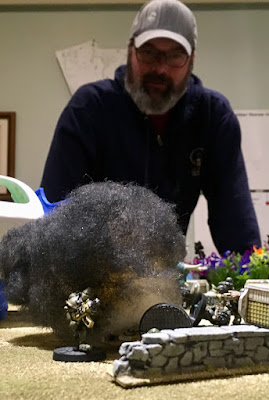 Defense Robot attacks up the center and then turns right to take the ork attackers pressuring Mayhem in the flank. 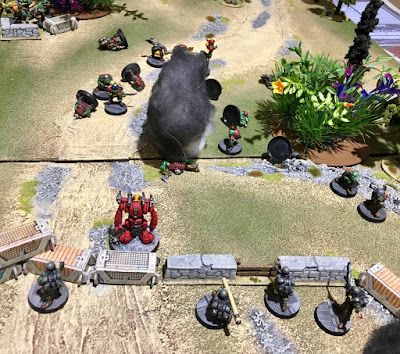 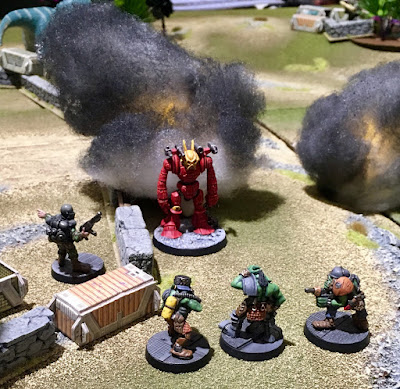 The two marines attempting to retreat to the shuttle craft are attacked and mauled by the Triceratops.


The remaining Marines at the OP are overrun by ork attackers...but take several of their opponents out as well...  The other Imperial forces break cover for the dash to the Shuttle... 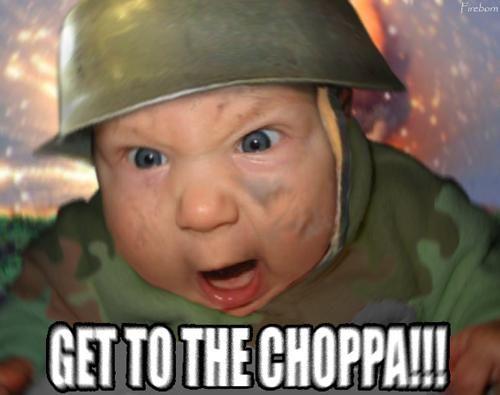 The defense robot takes a number of significant hits but keeps tying down the remainder of Marblaz's forces.

As Mayhem Fires his last burst from this heavy bolter and turns to run to the shuttle he sees most of his command scattered dead on the ground before him...but he hurtles over bodies of friends and foes alike in his haste to gain the safety of the shuttle.

Out of living targets, the Orks shift their fire to the shuttle itself...but the atmospheric protection armor on the outside of the shuttle shrugs off any attempt to damage it.

Mayhem makes good his escape...with only a single other trooper making it aboard the shuttle in time...as they lift off the ground Mayhem can see Orks overrunning the LZ while a Lopezilla sets about attacking them from the rear...

And there you have it...another fantastic game featuring our favorite action hero Sargent Major Mayhem and his trusty heavy bolter...sadly he was pretty much the only Imperial survivor of this ill conceived expedition...but at least he lived to fight another day..

Many thanks to Cher, Tom, Bella, and Samantha for making this such a fun game to GM.

Lets do it again soon!