I'm finally emerging from the post Old World Army Challenge painting slump and managed to finish a couple of Chaos Renegades.  Finishing these two also means that I have completed the 2nd Squad!!

To finish out the 2nd Squad I did have to transfer one Renegade to be the seed trooper for 3rd squad...as he was just too similar to one of the figures already included in 2nd squad.  So I replaced him with a different bolter armed renegade and added another Heavy weapon trooper to the unit...this one a fungoid body renegade with a conversion beamer.

Here is a group shot showing the complete 2nd squad.  Below are individual pics of the new troopers and some discussion of each.

To replace the "Halloween" themed renegade that was shifted to 3rd Squad I chose the bolter armed renegade with a bird skull looking face...a rather uninspiring mini in comparison with many of the others...

...or at least that is what I originally thought...as I painted him my appreciation for the sculpt increased and now I'm convinced that he is a great figure...

... course...as you probably know I really enjoy painting anything Blue...so that may have helpped shift my perception.. 😀

The heavy weapon trooper was a bit more of a challenge...for a number of reasons.

This figure has a fungoid body with Chitinous looking armor which is quite different from the power armor worn by most of the renegade figures...because it lacks the edging which I typically like to pick out in a contrasting color...like the grey parts of the above figure.

With the heavy texture of both the armor and the fungoid body I decided to rely heavily on inks and washes for this figure.

...I have limited experience working with inks...and they continue to baffle me after working on this figure.  In particular the purple armor completely shifted color when I applied the matte varnish coating when i was done painting...WTF is up with that?

That said the inks and washes on the Fungus portion of the figure seem to have worked out better and give it a very natural feel.

and to give you an idea of how much the color shifted with the matte varnish here is a WIP picture taken just before I varnished. 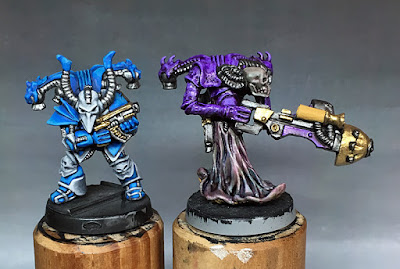 So...Inks are still a mystery to me and will need some further refinement of technique...

...but its nice to have these two done and the 2nd Squad finished off...

...that means I am half way done with my Renegade force!