Jenkins!? Where the Hell is Jenkins?!?!

After many failed attempts my local gaming crew was finally able to get together to play a game of Rogue Trader 40K last weekend...and we had a ton of fun.  I had four players and acted as GM myself and it was about the perfect sized group for the game I had in mind.

For a scenario I fell back on the one that Dustin and I played at OHNW 2015 which was a blast to participate in and turned out to be just as much fun to GM.

Lets get into it!

Background
After several months of fighting aboard the large Space Station (Excon Valderz) that orbits the planet Putney Prime in the Outer Rim Territories, Imperial Forces were finally able to force Ork Radiers led by Narblaz the Nasty to retreat to the planet surface.  Here Narblaz regrouped and attempted to salvage something out of his failed mission by exerting control over the planets surface.  However, Imperial forces followed him planetside in hopes of eliminating this Ork scourge once and for all.

Upon arrival on the surface of Putney Prime both forces quickly realized why the majority of the systems population lived on the Valderz...This planet was a nightmare!  Like a Detroit level hell hole!  I mean terrible!  Man (and Ork) eating beasts wandered the surface and even the plant life seemed to be out to cause great bodily harm.

After loosing a large portion of their forces to Ork counter attacks...and the local flora and fauna...Imperial command decided to let Narblaz have this shit hole if he wanted it and ordered their troops off the surface of Putney Prime and back to the safety of the space station.  Unfortunately, immediately after the issuance of this order communications between command on the space station and troops on the ground was interrupted due to solar flare activity....it was now impossible for imperial forces to direct the shuttle craft sent to pick them up to the proper LZ.  Impossible....unless they used their boosted homing beacon.  that sounds simple enough....but...

Sargent Major:  Private!!  Where is that fucking homing beacon anyway!  I want off this shit hole so I can clean my Boots!

Corporal Grove:  I don't know Sargent! Last I saw him he said he was off to "Drain the Lizard" Sargent!  He went that way! (Grove points to a densely forested area...where loud stompings and growling can be heard.)

Sargent Major:  Well shit Private!!!  Aren't you his Battle Buddy?  You can't let him walk off alone! When he pisses...You Piss!  Now we have to go and find that MORON!!!  I certainly hope he hasn't become breakfast for that Lopezilla we saw in the area yesterday!  That thing will eat anything!

So this is where the fun begins.  The tattered remains of the Imperial forces under the control of Sargent Major Mahan (Mayhem to his troops) must find Jenkins and recover their homing beacon so they can escape the death planet.

Narblaz and his boyz have intercepted the Imperial order to abandon the planet and realize this is their last chance to: put a hurtin' on dose hummies....and they never miss a chance to do that!

Ork Forces
-8 Ork Squad with Standard Bearer, armed with Bolters and led by Narblaz himself.

Landscape and Initial Dispositions
The tracking device in Pvt. Jenkins' uniform is supplying confusing information...as it seems to be moving too quickly to make sense...but Sargent Major Mayhem and his forces have determined that he (and the homing beacon) are somewhere in this vicinity.  But intel also suggests that that some Narblaz's Boyz may be nearby as well.... 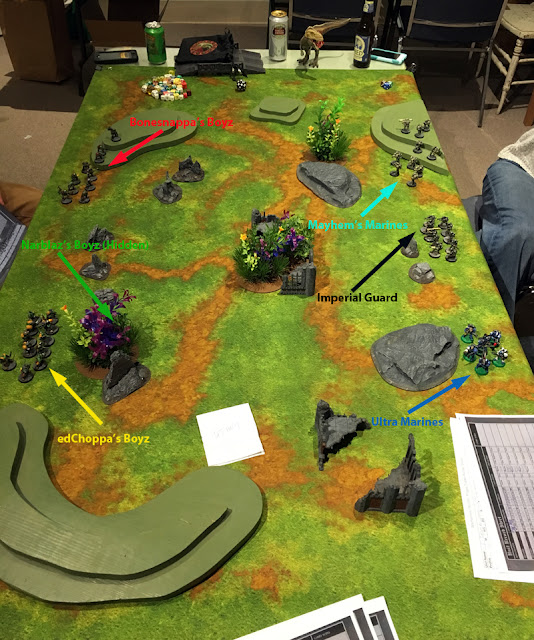 As you can see the Imperial forces have positioned themselves to make good use of their long range weapons (missile launchers) by giving them each a good field of fire.   Mayhem's Marines have taken up position on and in front of a hill on the imperial Right.  The Imperial Guard are holding the center and hoping to move toward the dense forest at the center of the board...while the Ultra Marines start the game clustered behind a rock outcropping on the imperial left.


On the Ork side of the Table Narblaz and his squad have carried out a pre-game scout and hidden themselves in the small patch of forest on the Ork Right...they are backed up by edChoopa's Boys while Bonesnappa takes position on the left.

As the action kicks off the Orks realize that they are at a major disadvantage in long range fire power and turn one movement is dominated by trying to get their troops under cover.  On the Imperial side Hale and the Ultramarines move toward the left and the ruins there...leary of exposing themselves too much to enemy fire.  On the Imperial right Mayhem and his marines move forward toward the rock out cropping and small patch of forest...also hoping to stay under cover.  In the Center Sargent Dyer decided to split his squad leaving a solid base of fire near his deployment zone while sending the heavy bolter and support team forward to the dense patch of forest to see if they can find Jenkins and the homing beacon. 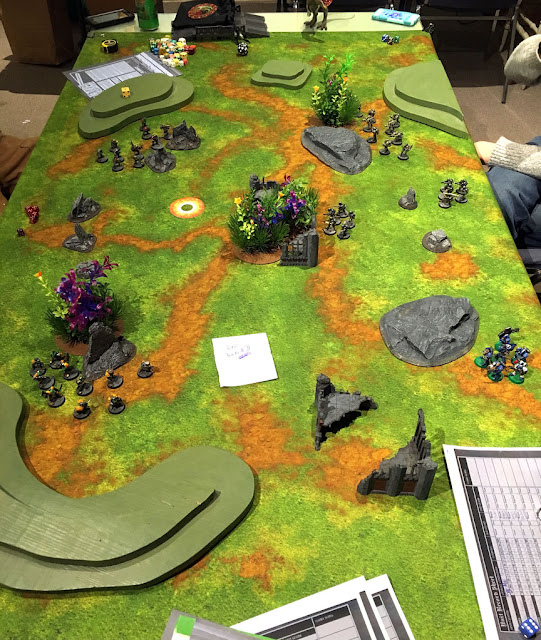 Things start to heat up in turn two with Bonesnappa exchanging fire with the imperial forces to his front while edChopa and his boys break cover and move to engage the imperial left...though in doing so they take hits from both Ultra Marine and Imperial Guard Missile launchers.

In turn 3 edChopa's boys return the favor hitting the Ultra Marines with the heavy Plasma gun causing two wounds to Lt. Hale. Attention on the Imperial right and Ork left is suddenly shifted with the appearance of the LOPEZILLA!  and he looks hungry!

With the appearance of the Lopezilla both forces on that end of the table concentrate their fire on bringing down this over sized killing machine...but he is just too tough!  His thick hide shrugs off bolter and Laz Rifle fire with ease.  Undaunted the dino proceeds further onto the table before pausing near the center of the board to....ummm...."make a deposit."  After lightening his load... the Lopezilla turns his attention on the Ork Left and moves toward Bonesnappa's boys.

Watching the dino through his enhanced helmet display Sargent Major Mayhem can clearly see human bones in the Lopezilla's poo pile! Jenkins has been located!  Now he just has to get someone over there to find the homing beacon!


Meanwhile on the other end of the table Narblaz and his boyz break cover and move to support edChoppa and take out the Ultra Marines...but they emerge into a hail of fire and rockets and are quickly decimated.  Even the mighty Narblaz takes two wounds.

As the Lopezilla decends on Bonesnappa's boyz and eats several of them both Ork and Imperial forces concentrate their fire on the dino....finally causing a couple of wounds. 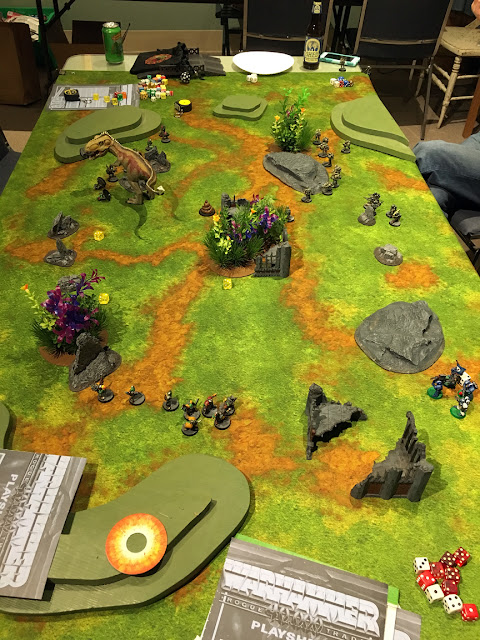 Meanwhile, Mayhem, having spotted the remains of Pvt. Jenkins pushes a portion of his squad forward to search for the beacon.  On the Ork right Narblaz and edChoppa's squads continue to get punished by imperial fire power but move forward hoping to come to grips with the Ultra Marines near the ruins on the imperial left.

In their desperate attempts to fend off the Lopezilla edChoopas boys manage to light the beast on fire with their flamer and send him screaming away toward the center of the board.  The lit up dino only becomes an easier target as both forces try desperately to bring the monstrosity down. 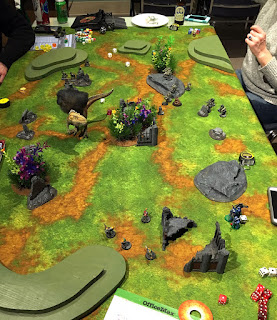 The Ork right is once again hit hard by plaza missile fire and is greatly reduced...now consisting of only Narbalz and a few random boyz.

Pvt Kirkel of Mayhem's squad approaches the dino droppings and despite his repulsion drives his fist into the mess and, amazingly, finds the homing beacon on the first try!  After stopping for a quick smoke to celebrate his good fortune, Kirkel moves rapidly back toward the imperial deployment zone and Mayhem orders his troops to lay down covering fire.

On the Ork right Narblaz has finally gotten to within close range of his ultramarine foes...only to be immediately be set on fire by the flamer armed trooper.  The Ork right is a lost cause.


On the left, still smarting from several of their comrades being eaten, Bonesnappa's boys once more concentrate their fire on the Lopezilla...finally putting the the flaming dino out of its misery....

...but while the Orks are distracted the Imperial forces make good their escape....and the Orkish candle that was Narblaz the Nasty finally goes out...for good.

So, there you have it.  A resounding victory for the Imperial forces.  They have retrieved their homing beacon and can escape the nightmare planet of Putney Prime.

What will happen to the Ork forces left behind?

Only time will tell...