Well yet another week has slipped by and another team has stepped into the Arena of the LPL...allowing last weeks warriors to step into the lime light....

...though they are a bunch of Losers!

For round six I opted to start on a squad of enemies for my RT 40k project...and I couldn't resist painting up some of the Orks that have been pouring in through my mailbox of late.  Here they are! 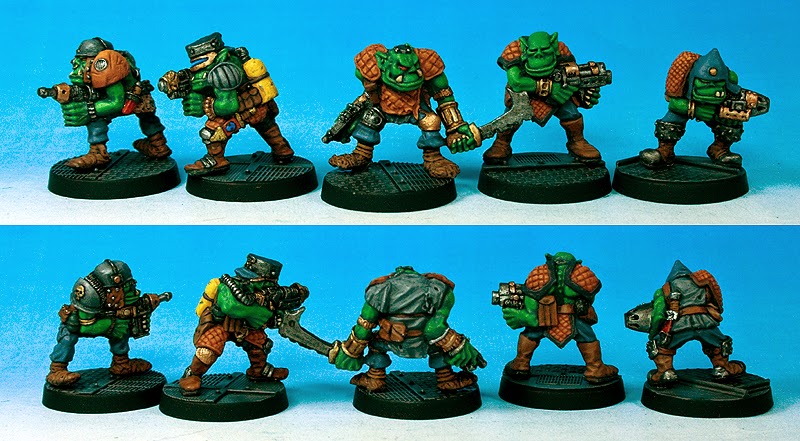 Great figures in general and fun to paint...

...except for the squad leader there...this was a terrible casting and he was a challenge to paint.  Other than him I really like all these figures...full of humorous character.  I went out on a limb with the orange Flak armor ...I really had to think hard to come up with a color that contrasted with the green skin but hadn't also been done to death by other Ork painters....in the end I think it look quite good.

In an effort to speed up my Ork skin tone I also eliminated one step from my previous system....and I'm not real happy with the results...they lack some depth in their skin tone when compared with some of my other examples...so... lesson learned on that.

Anyhoo...this is the first batch of these guys...my goal with Orks is to have three squads of troops and a couple of support elements to play with.  I'm acquiring the final pieces for this force as we speak.