So there is some interest in the Frostgrave rules in my area and I have decided to start to pull together a warband that I can use during games in which I lose to my friend Roberto...:).


If you are not familiar with what Frostgrave is....well then you have been living under a (hobby) rock for the last year.  Frostgrave is a new Skirmish game, put out by Osprey, that is focused on small warbands, 10 figures or less, led by a powerful wizard and his apprentice as they scour a long abandoned city for ancient relics of magical power.


Being the old lead head that I am I thought that this would be a perfect time to employ some of my long neglected figures in a new and interesting way....while keeping them available for potential expansion into a full fledged army for 3rd edition WFB fun....therefore I will be deploying them on square bases.  BTW there is a fantastic range of figures produced by NorthStar that are specifically for Frostgrave...many of them sculpted by Mark Copplestone...but I couldn't possibly justify buying new figures when I have so many unpainted ones to chose from already...


As lead mountain has grown to epic proportions I really had a lot of options that I could pursue in selecting what type of warband to pull together.  Sadly most of my primary painted forces are not strong on magic at this point...I have a couple of dwarf wizards I could build a warband around. I could easily pull together a Wood elf warband, I have orcs and Goblins coming out my ears...skaven too.  These are all perfectly viable options...but as FrostGrave is based on human forces (at this point) I decided to go with my other strong magical "human" force...Chaos.


Having recently completed a long suffering transaction for some fantastic Chaos Thugs and a perfect Chaos Warrior I started digging through my Chaos box to pick out some wizards and a couple of missile troops to form the core of a warband.

As you can see all classic chaos figures that I think work perfectly for this system.

Of course we should start off with the leader of the warband...the principal wizard, his apprentice (200 pts), and his loyal bodyguard (knight 100pts). 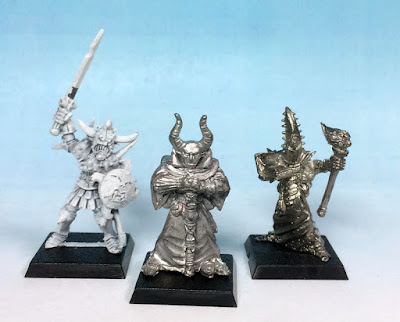 I'm really excited to paint all three of these miniatures.  Both wizards look fantastic and suitably evil...but the stand out figure in this little group to me is the Chaos Warrior!  Check out that sculpt!  It is insanity.  Now I don't think he would fit very well with the later Goodwin sculpted Chaos Warriors as he is quite a bit smaller than they are.  However, for Frostgrave, where he is likely to be the only heavily armored figure in the warband...I think he is going to look bad ass. 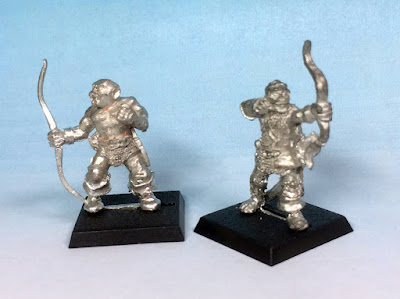 The Chaos Thug range, which these guys come from, is a perfect fit for Frostgrave as this game focuses on lightly armored troop types.  The arms and armament across the thug range are varied enough to fit almost any of the soldier types listed in the Frostgrave Rule book.  For example the archer on the right above would also be suitable for use as a Ranger.

The bulk of the warband is made up of four Thugs (80 pts total)...and in this case actual Chaos Thugs. 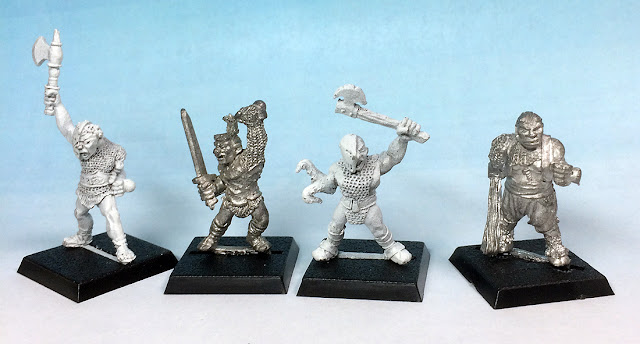 Again the classic Chaos Thug range has so much to offer for troops for a Frostgrave warband....I just settled on four of my current favorites....though now that I look at it again 3 out of the 4 are holding their arms up in the air.....that seems a bit excessive and I may switch one out for a different pose....luckily I have options...:)


And finally the Big Bad Wizard never goes off searching for lost relics with his trusty Warhound  Spike (10 pts). 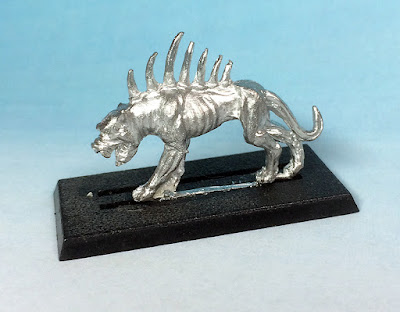 With the inclusion of Spike the points value of the warband hits 490pts (out of 500 possible) and also reaches the maximum number of models allowed in a warband (10).  So I think this will be a good well balanced warband...At least I hope it will be.  First I have to get it painted and then we'll see how it performs on the table.


I hope to have an actual game of Frostgrave in the near future (probably tabling a temporary warband of dwarfs) and will be sure to provide a review and AAR of the game.