For the first iteration of the Golden Gobo Painting contest that us fans of Oldhammer have participated in I had to really do some soul searching to pick a suitable figure.  This is a somewhat unique contest in that not only did participants have to paint up an Old School figure but we had to create a stat line and background story for our character.  This made the contest quite fun and proved to be a challenge for me as I'm not the best and coming up with "fluff" for my figures or armies....but I gave it a go.

As I ruminated on my figure choice I kept coming around to one of my absolute favorite Marauder Goblin Sculpts....an uncatalogued Goblin Mage.  I had painted a version of this figure back in the late 80's and he served my evil armies well on many a battlefield.  Luckily I liked this figure so much that I managed to hold onto him for all these years...and I can even share it with you...here he is in all his late 80's glory! 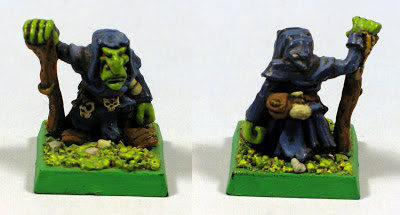 haha...as you can see at the time I was fully on-board with the Green base edge and the neon green Goblin skin that was so popular in the 3rd edition...but despite that you can see that this is a VERY cool figure that just oozes character...love this guy.  In fact other than the skin color I like my color choices for his robes...and kept them for the new version I painted for the Golden Gobo.

In a trade on Frother's late last year I stumbled into another copy of this great figure....so I didn't even have to strip this guy down to paint a new version for the GG.  Here is my new version of the figure...I call him Darnog the Dank.

So...I've toned the skin down a bit and given him Dark grey sleeves instead of all blue...and WOW...looking at them next to each other you can really see the value of decent basing...so much better!

Once the painting was done I started to think about the Fluff for Darnog...first I came up with a Stat line for him and a short background.  Once the juices were flowing I also cranked out a brief story describing how Darnog came to posses his powerful protective magic item.

I should note here that the place names used in the background and narrative are not ones you will find on any map of the Old World...but are of my own creation...and will be more fleshed out as I continue to work on a campaign to play with my local crew...hopefully over the coming winter.

Equipment
Darnog is unarmored and carries only a staff as a hand weapon. He is, however, equipped with a Bracer of Protection which gives him a saving throw of 4+.

Background
It is rumored that Darnog the Dank was spawned in the depths of the eastern Grimwald…the great forest to the north of the city of Culhaven. Reportedly his magical abilities manifested themselves early and he is said to have had considerable control of them even at an early age. Some say that he consumed the rest of his littermates…and some say even his parents.

He first became known to the men and dwarfs of the region when his tribe was instrumental in the destruction of a relief column of troops from Finhoff marching to break the siege of Culhaven in 2367CE by the army of Larlog Kahn. Rumors of the hideous experiments carried out on captives of this column by Darnog did not take long to reach the council chambers of Culhaven where vengeance was sworn. When Larlog’s army was later destroyed by a coalition force of troops from Culhaven and Woodelves from the western portions of the Grimwald, it was hoped that Darnog had fallen in battle. But his Dark magics have been reported as instrumental in a number of other actions since then…though no credible witnesses have survived to report it with any certainty.

The few firsthand accounts that do exist from individuals who have encountered this powerful goblin all mention the pungent odor that seems to permeate from him. It is as if he has absorbed the very essence of the deep, dark, wet forest into his being. Perhaps it is through some twisted form of primal connection with the forest around him that has allowed such a debased being as this goblin to achieve such unheard of power. The most recent reports have placed him with a small but growing band of goblin raiders on the fringes of the Grimwald where they meet the Blighted Hills which also includes the notorious unit Skliff’s Shootas. His destruction is still of the highest priority for the city councilors and residents of Culhaven.

Narative
Erich watched in bewildered fascination as the goblins swarmed over his wagon load of good and his dying horses. It reminded the trader from Culhaven of a pack of five year olds let loose on a pile of sweet meats. Squabbles erupted over particularly shinny bits of loot, distracted goblins walked into each other or tripped over tidbits of gear that were strewn about….and the Noise! It was an endless din of gibberish mixed with squeals of delight, as treasures were discovered, and grunted curses of anger as they were snatched away by another greenskin.

His fascination was broken by the scream of Pie Eye as a goblin repeatedly stabbed the wounded horse in the neck…attempting to finish the poor mare off. Erich cursed between clenched teeth as the goblins began cutting chunks of the animal off before she was even dead. Occasionally one of the vermin would throw a glance at Erich…he knew his time would come before too long…but for now they seemed content with rifling through his belongings. They had caught him off guard, half asleep on a hot summer day driving his wagon through the dense woods north of Culhaven. This road was supposedly safe but the dense woods in this part of the province were occasionally infested with groups of greenskins, he should not have been traveling alone…but guards were expensive and profits were slim. If he somehow escaped this nightmare he would personally volunteer to lead a force of retribution to rid the wood of this foul group.

After another ten minutes of rooting through his wagon load of trade goods, and stripping his team nearly to the bone, a group of five of the larger goblins turned their attention to the trader who lay trussed like a hog at the edge of the forest. As the group ambled over to him, Erich tried to shake the sleeve of his tunic down over the thick gold bracer that was fitted tightly around his left arm. Sadly the motion seemed to attract attention to the only valuable piece of equipment that Erich actually owned.

“Wots dis den eh? Got a bobble der do ya?” the largest of the filthy figures barked at Erich. When he failed to answer the goblin went on “Gif it ‘ere or I’ll stick ya good” he said as he pulled the long curved blade knife from his belt. The cruel looking blade was still sticky red with horse blood.

The goblin’s feeble mind failed to understand that with the fetters they had secured him with he couldn’t possibly comply…even if he wanted to…so again he kept his silence.

“fine den…its da ‘ard way den is it?” the goblin spat, glancing at his neighbors to insure that they would back him up.

“ya Skliff…the ‘ard way it is..I’s like the ‘ard way” one of the others muttered, his face twisted into a cruel smile… and they moved to pin the merchant to the ground by piling on top of him. The one apparently known as Skiff pulled his bound hands out in front of him and knelt on Erich’s elbows. The pain was intense but he knew worse was to come.

“right den…lets git to it den..dat bobble gonna look right nice on me own ‘and” Skliff growled as he brought the knife down to severe Erich’s forearm just above the bracer.

The bracer that had saved his Erich’s life innumerable times was about to become the end of it as well. It had been a gift from his uncle Heinrich on his deathbed. The old man swore it had some charm that had kept him safe during his years with the mercenary outfit he had spent his youth serving with, and Erich had no reason to doubt him. In many bar room brawls, scrapes with highwaymen, and that unfortunate incident during the Brewery Riots, Erich had emerged unscathed and he could only attribute that to the “charm” of his uncle’s gift.

It was just as the knife was about to cut into his arm that Erich became aware of the smell. Not the rancid body odor smell of the filthy goblin who was kneeling on his arms, but a wetter, mustier, earthy smell that suddenly seemed to fill the air around them. At first Erich could not locate the source of the smell…not until he heard the loud crack of wood on skull and Skliff suddenly pitched to the side…out cold…could the trader determine its origin. Looming over him…filling the space above him where Skliff had knelt…was an ancient Goblin dressed in heavy dark blue and grey robes…a gnarled wooden staff clenched in his wrinkly hands. His face was slack and expressionless, but his eyes glowed red with pure malevolence. As the rest of the Goblins holding Erich down backed away, giving way entirely before newcomer he heard several of them mutter the name “Darnog.”

Even though he was no longer restrained by the pile of goblins that had been sitting on him, Erich was frozen in place by some unearthly power. It was as if the gaze of Darnog alone had the power to hold him motionless. As the wrinkled green skin stepped up to stand directly over him, Erich now knew where the wet musty smell that permeated the air was coming from…this was Darnog the Dank…a powerful goblin wizard and scourge of the Eastern Marches. Erich’s bowels suddenly turned to water and it was all he could do to keep from soiling himself. Where before he had considered escape an actual possibility he now knew that a quick death would be the best he could hope for. Darnog's reputation was well known to all...

Darnog seemed to sniff the air around the merchant…and his gaze suddenly shifted from Erich’s eyes to the golden bracer on his arm…and there it lingered for a long second. With careful precision Darnog brought the end of his staff up and gently tapped the bracer twice. Immediately the ornament sprung open in a way that Erich had not even known was possible. Darnog bent over slowly and pulled the bracer free of Erich’s frozen arm…and as he straightened the wizard fastened it around his own forearm. Without so much as a word Darnog turned and walked away…taking Erich’s last hope with him.

Once it was clear that the grizzled goblin was done with him, the remaining greenskins closed in on the hapless trader…No Charm would protect him now...

Well there it is...I hoped you enjoyed the story.